How Did The Milwaukee Bucks Beat The Lakers? Earl Boykins, That's How

Share All sharing options for: How Did The Milwaukee Bucks Beat The Lakers? Earl Boykins, That's How 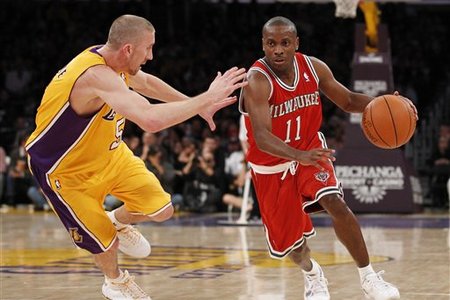 It was SO cute to see that the Bucks were neck-and-neck with the Lakers through the first three quarters in Los Angeles last night. But it was kind of crazy to look up this morning and see the final score. How did "neck-and-neck midway through the third" turn into a 19-point blowout?

Once again, he was the little sparkplug / whirling dervish / waterbug / Poison Arrow Frog that saved the Bucks and killed the Lakers Tuesday night. 22 points with four three-pointers for the Bucks, who were playing with just nine players (and without Brandon Jennings), but finished the game on a 21-7 run.

But they had Earl! And he's got enough poison in him to kill an elephant.