Mapping The NBA's Young, Old And Bad: Failure In The Context Of Age

This week's exercise in basketball cartography from Tom Ziller offers a visual look at the NBA's below-.500 teams and judges their success with weighted team age as the primary focus, from the young and bad (Kings) to the bad and old (Cavs).

Share All sharing options for: Mapping The NBA's Young, Old And Bad: Failure In The Context Of Age

There are a million ways to lose. But enough about the Sacramento Kings. In a macro sense, losing plays out a lot differently depending on context. Proper (or limited) expectations typically have as much to do with victory as actual success does. If you gun for a .350 winning percentage and hit it, you still aren't good. You just aimed low enough to succeed.

A major context for team success in the NBA is age. This week's exercise in basketball cartography looks at all 16 teams with a losing record and judges their success with weighted team age as the primary focus.

Our map is sure to express (un-)quality in its own context -- Phoenix's 13-16 record is certainly different than Sacramento's 5-22, and should be considered as such. Winning percentage is expressed on the x axis, with teams competing for a playoff spot toward the right, and the very worst teams closer to the left side. Age is then expressed on the y axis, with the youngest teams in our set toward the bottom and the older squads toward the top.

Also keep in mind that this map includes only the NBA's losing teams. There is a team younger than all of these squads. More on them later.

Now, the map. Click to enlarge. (Alternately, pull out your wand and says Engorgio. <high-fives 14-year-old colleagues in his Harry Potter Book Club>) 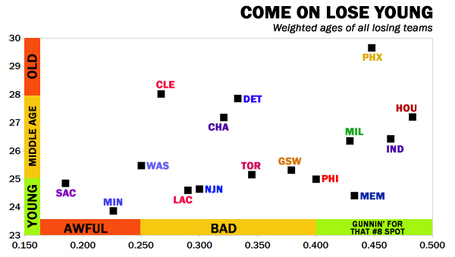 As we can see, most of the NBA's really bad teams are indeed young. That doesn't make the teams suck any less. But it's an excuse of sorts: young players improve with experience and growth, and young teams can usually be expected to do the same. Sacramento is truly awful. But at least two of their best players (Tyreke Evans and DeMarcus Cousins) are 21 years old or younger. (Extra bonus: only one of them acts even younger.)

There's a sore thumb up in here, though: the Cleveland Cavaliers. The Cavs are really, really bad, second-worst in the East by winning percentage, and if not for the Kings, the coldest team in the league the last month or so. Some fool's gold wins early in the season made it seem as if Cleveland could tread water with its roster of LeBron-era leftovers. But reality has been swift and cruel.

What are we left with? One of the league's older teams and one of the league's worst teams, all wrapped into one. Cleveland has pathetically few young players in its rotation -- 24-year-olds Ramon Sessions and Daniel Gibson, and 22-year-old J.J. Hickson. But all those veterans playing major minutes (Antawn Jamison, Anderson Varejao, Mo Williams, Anthony Parker, Joey Graham) can't get the Cavs to compete consistently. It's a dark place: bad with little hope of a brighter tomorrow.

The Suns are old too, but that team is looking to slip into the playoffs in the deep West. The Grizzlies, also hoping for the No. 8 seed, are in a better position -- you'd rather have Memphis' roster than that of Phoenix, without question. But you can understand why the Suns are both clinging to and OK with a roster of veterans. Cleveland? Nope.

Now about the team younger than all of these squads: the Oklahoma City Thunder. The Thunder have a weighted team age of 23.59 years -- about 100 days or so younger than the Wolves. Yet the Thunder are a solid playoff team hoping to move even higher and challenge the West's elite by year's end. Some will say it's not fair, that OKC has four top-five picks all on their rookie contracts. In light of that, note that Sacramento is preparing to win its third-straight top five pick (barring a miracle), and the Wolves are right around the corner.