To say Amar'e Stoudemire is on fire right now is an understatement. Against Minnesota Monday night, Stoudemire scored 34 points, bringing his streak of 30-or-more games to five. Not coincidentally, the New York Knicks also saw their winning streak move to five with a 121-114 victory over the Timberwolves.

As discussed in Monday's NBA Scores And More, the Knicks are finally on track with Mike D'Antoni's famous seven seconds or less program. It's taken a few years and, well, the free agent acquisition of Amar'e. But the promised land is here. The Knicks are pretty good and danged fun to watch.

But where is Stoudemire on the Amar'e Spectrum at this point? Is this officially Vintage Amar'e? Or a new post-Nash "I'm Ridin' Solo" Stoudemire? To the spectrum! 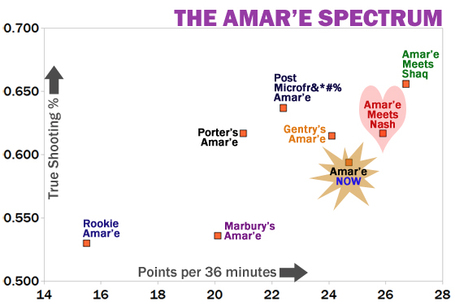 This brand of Amar'e is somewhere between the versions that played under Alvin Gentry (last season) and that first met and played with Steve Nash (2004-05). Certainly, this Stoudemire is both more prolific and efficient than the pre-Nash Amar'es -- that's a relief, for many felt losing Stevie would crush Stoudemire's production. It has not, friends. It has not.

In this particular game, the defense of neither Stoudemire nor New York was any good. The Wolves' big men scored easily -- Kevin Love had 33 on 10-18 shooting, and Darko Milicic went 4-4 before leaving with injury. That's going to be a problem at some point. While the Knicks offense is blazin', it's defense is way behind, and it's going to be difficult to get it on track during the meat of the team's schedule. Whether that means a first-round flame-out ... well, heck. New York fans would still take it, right? 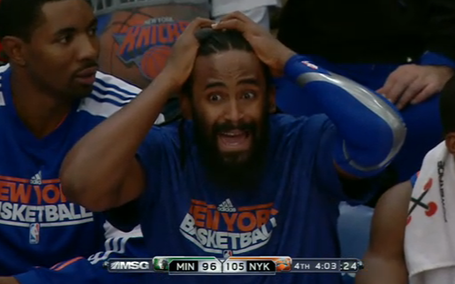 From the blogs: Posting and Toasting is partying in the hot tub, while Canis Hoopus thinks the game may have ended differently had Darko not been injured in the first quarter. (This is the world we live in now! Darko!)

Hawks 80, Magic 74: Orlando only hit four three-pointers for the third time this season. The Magic hit four or fewer threes only three times all last season. It's a big deal considering how many they take from behind the arc (24 per game, about a third of their total shots). Orlando, talented as it may be, can't survive catastrophic shooting nights. When Josh Smith is in the other team's jersey, dropping 19 points, 13 rebounds and four blocks, it's just too much.

Heat 88, Bucks 78: Miami is now 14-8 with another double-digit win over a team with a losing record. Of course, no one expected the Bucks to be this bad, or bad at all. So, lest the question of whether this was a win worth noting plummet me into an existential crisis, let's just note that Miami has now won five straight, and that Dwyane Wade scored 25 points.

Pacers 124, Raptors 100: Indiana wins again! The Pacers, now 10-9, have really made the case for franchise stability, given the excellent work Jim O'Brien has done molding this team in the image he always wanted. Unfortunately, Jay Triano is making the opposite case on the other sideline.

Clippers 99, Kings 91: As I have argued for a couple weeks ago, the Kings are the worst team in the NBA, and it's not particularly close. The Clippers are now 2-0 against Sacramento this season, and 3-17 against the rest of the NBA. The Kings actually made up a 16-point fourth quarter deficit to challenge, but Eric Gordon finished it out.

How did the Clips get a 16-point lead? Awesome defensive possessions like this one from Sacramento: