The Lakers beat the Wizards in an entertaining game in L.A., but they clearly still have some things they need to work out before they return to the NBA's elite.

Share All sharing options for: NBA Scores And More: Kobe's Lakers Top Wall's Wizards In A Fun One, But Still Look Lackadasical

That was a really fun game if you're into a bunch of highlights. If you're into good basketball - well, we saw it at some point. But sometimes, it's good to just kick back and enjoy some unbelievable athletic plays.

As for real analysis ... once again, the Los Angeles Lakers let a bad team hang around against them. The Lakers are a team that plays with a certain kind of rhythm, and that rhythm often comes and goes in an 82-game season. But to give up an 18-point lead while the likes of Trevor Booker and Kevin Seraphin shove you around is not a good sign.

In a lot of ways, the Lakers' performance was like their two losses to the Phoenix Suns in the Western Conference Finals. The Suns went to a bunch of gimmicky zone defenses, forcing the Lakers to beat them with three-pointers. The Lakers obliged and kept launching, which keyed Phoenix's transition game. Last night, the same thing happened, albeit with a much, much worse defensive team. The Lakers kept launching away from three, and kept shooting from spots on the floor that hurt their ability to get back. Whenever the Wizards got the ball (which, admittedly, didn't happen all that often because the Lakers dominated the offensive glass), they ran and got easy buckets on the other end.

There's a danger to going zone against the Lakers, so don't expect too many teams to duplicate it. For one, it's a tacit admission that your defense isn't good enough. For another, the Lakers have such a good passing team, so when they're devoted to moving the ball, they will destroy you. And hey, it's kind of silly on some level to say a defense that allowed the Lakers to score 125 points per 100 possessions somehow worked. It most certainly did not, and in fact was probably one of the worst defenses the Lakers have seen in years. But the Lakers also allowed the Wizards to drop 117.4 points per 100 possessions on their defense, and I think the offensive confusion at times played a role in the latter number. The Lakers didn't retreat well after missed shots, since too many guys were not in the right position after shots were launched, and the Wizards were able to get out on the break.

The Wizards may have stumbled upon a useful rotation for the future. Booker and Seraphin were outstanding, both playing their best games as a pro. Flip Saunders also finally did what he should have done a long time ago and put Kirk Hinrich in a reserve role to allow Nick Young to get more playing time. Young responded with 30 points in 32 minutes off the bench, though he did make a questionable decision late in the game to shoot a three instead of passing it to Seraphin under the hoop. Throw in a strong performance from John Wall (22 and 14 assists) and a decent performance from Gilbert Arenas (23 points on 17 shots, though with seven turnovers), and there might be a mix that works long-term. At the very least, Booker should have earned all of Yi Jianlian's minutes.

Play of the Game: So many great plays in this one, but we'll pick Nick Young's 360 layup that got the Lakers crowd buzzing.

From the blogs: Silver Screen and Roll called this "the blowout that wasn't," while Bullets Forever reminds fans that it's not worth making drastic changes based on just one game.

The Mavericks' 10th-straight win wasn't against the best competition, nor was it their most impressive performance to date. But it was a win nonetheless, and a very important one at that. The Warriors have been a (relative) thorn in the Mavericks' side over the years. The Mavericks are just 8-7 against them in the regular season since 2006, and there's also the 2007 playoffs, of course. The Warriors pose matchup problems with their speed, so this was no easy game. To get a win in a tight game despite missing defensive lynchpin Tyson Chandler, out with a stomach virus, is impressive.

It wasn't a perfect game, not by any stretch. The Mavericks did a really poor job in transition, allowing the Warriors way too many good open looks. Golden State hit 10 of their 20 threes, including a 5-8 total from Stephen Curry and Monta Ellis. But in the halfcourt, the Mavericks did their job even without Chandler. Dirk Nowitzki had an efficient 25 points on 18 shots, stepping up down the stretch, and Jason Terry had a big game off the bench. When it got to money time, the Mavericks executed and got all the shots they needed to pull away.

The unlikely heroes of the game, though, were Ian Mahinmi and Alexis Ajinca. Neither player gets much time on the court normally with Chandler healthy, but they more than held their own when pressed into duty last night. Ajinca helped control the paint in the second quarter with six rebounds, and Mahinmi brought a ton of movement and little things during his 21-minute stint. The problem with Mahinmi over his career has always been fouls, and yes, he did pick up three in those 21 minutes. But it's nice to know you can count on him to just play hard. They were a major reason the Mavericks were able to contest the rim so well in this one. Golden State shot just 13-28 at the rim last night, even without Chandler in the game.

Dorrell Wright continues to be a sneaky-good pickup for Golden State -- 17 points and 11 rebounds -- but he does need to shoot a little less. Caron Butler (19 points on 18 shots) should also shoot a little less, though at least he's driving this year.

Play of the game: I didn't realize Jason Terry could get up like this.

From the blogs: Mavs Moneyball notes Mahinmi's solid play, while Golden State of Mind laments that the Warriors almost stole this one.

The truth hurts sometimes, and the truth is that Chauncey Billups cost George Karl a chance to get his 1,000th win. In a literal sense, Billups killed any chance the Nuggets could stage an improbable comeback by not calling timeout so Karl could set up a game-tying play. The Nuggets definitely had timeouts, and as you can see here, there wasn't really any transition opportunity for Billups to take. 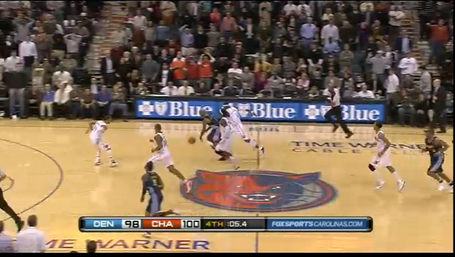 But Billups hurt the Nuggets before that as well. Defensively, he was a major liability in this game. D.J. Augustin lit him up from the perimeter, scoring 18 points on 11 shots. Augustin has been much better than he was last year, but he still isn't the type of quick point guard that should be able to drive by you. Nevertheless, Billups laid off him too much, going under screens and not even contesting many of Augustin's open shots. For someone who is supposed to be the leader of the team, that kind of defensive effort is discouraging.

The Nuggets tried to remedy this problem by putting Billups on Stephen Jackson and have backup point guard Ty Lawson guard Augustin, but that didn't work either. Jackson took advantage of Billups' lack of foot speed and size, beating him in pick and rolls and shooting jumpers over the top. If you can't stick Billups on the small, quick guy, and you can't stick him on the taller, slower guy, who exactly can you stick him on?

In general, the Nuggets were too lazy contesting jump shots in this game. I get the logic - you want the Bobcats to beat you from the outside because they don't have amazing jump shooters, but at least give a token effort. This is something we see far too often from the Nuggets, and it prevents them from being an elite team.

I should mention, for the sake of balance, that Billups was excellent offensively, with 25 points on 13 shots.

Play of the Game: You get full highlights for this one.

From the blogs: Rufus on Fire has the good and the bad for the Bobcats, while Denver Stiffs notes that this is the first time the Nuggets have lost to a subpar team this year.

The stats may not show it, but defense carried the Blazers when it mattered most tonight. The Suns scored 24 fourth-quarter points, but six of those came in the final minute on desperation three-point shots. For the rest of the quarter, the Suns scored just 18 points and had eight turnovers. Steve Nash did his best, but when he plays with a bunch of poor finishers, you get a lot of turnovers. Guys who once simply caught the ball and shot are being forced to make plays, and it's not working out so well.

Then again, maybe the Blazers won simply because they hit 32 of 33 free throws, which likely won't happen again.

Wesley Matthews continues to impress for the Blazers, scoring 24 points as part of a point guard-less lineup with Andre Miller suspended. Brandon Roy also managed to score 20 points, though he still has no lift on his jump shot. Nash (25 and 16 assists) and Grant Hill (23 points) were big, but Portland closed off Jason Richardson extremely well (eight shots, six points) and shut down pretty much everyone else.

From the blogs: Blazers Edge notes the surprising performance of Patty Mills, while Bright Side of the Sun blamed Goran Dragic for the loss.