Who do NBA teams trust in crunch time? Are coaches making the right decisions on who to give the ball to?

Share All sharing options for: Is Kobe Bryant Actually Clutch? Looking At The NBA's Best Performers In Crunch Time

Clutch. It's bases loaded, two outs, bottom of the 9th. It's two minutes left, a score down, and 98 yards to go. It's fading away, elevating over an outstretched hand, and beating the buzzer. It's a concept that transcends sports. And yet, it's also a concept that mostly eludes definition. We can't say exactly what constitutes a clutch situation, but we know it when we see it.

For four years, 82games.com has attempted to quantify "clutch" in the NBA, annually publishing late-game NBA data. 82games.com defines clutch as the 4th quarter or overtime, less than five minutes left, and neither team up by more than five points. Last week, they released their latest statistics for the 2010-2011 season.

Knowing, for example, that a player scores 30 points per 48 clutch minutes is valuable. But how do we know that a player isn't simply gunning it every time down the floor and inflating his numbers? How do we know that one guy isn't dominating the majority of clutch possessions even if he isn't particularly efficient or "clutch"? Measuring how many points a player produces per clutch possession is much more valuable than other methods of analysis. With a little manipulation, the provided numbers can be translated to advanced statistics.

THE CLAIM: The existence of "clutch" can be statistically confirmed, and given a choice, you'd want players like Kobe Bryant, Carmelo Anthony, Paul Pierce, Manu Ginobili, etc, with the ball in their hands.*

* I mention those players because each has consistently been associated with late game heroics; more generally though, it applies to any player that's considered good in late game situations.

Since 82games.com provides not only points per 48 clutch minutes, but also assists, turnovers, FGAs, FTAs, and percentage of shots assisted figures, HoopData.com's modified versions of Dean Oliver's Points Produced and Possessions Used statistics can be utilized to find efficiency.

It's very important to note that not all clutch players get their points in the same way. Some have their shots set up for them. Some get looks for others. And some put the ball in the hoop themselves. There's definitely overlap among these three categories, but the assist rate and percentage of shots assisted numbers provide at least something of a division among the three groups.

This first group contains players that get their looks in the flow of the offense. More than half of their clutch field goals come on assists from teammates, and, as you'll see, the group encompasses both shooters and big men.

As a note, the following graphs include players that have averaged at least one possession per two minutes played. 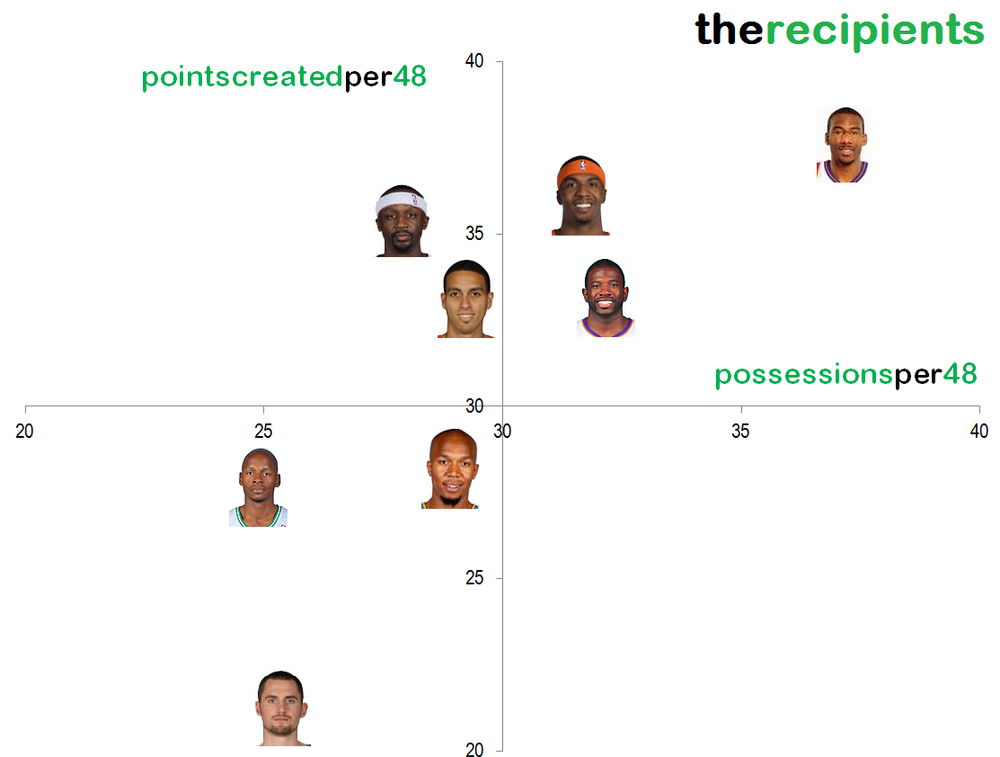 Amar'e Stoudemire straddles the "scorer"/"recipient" boundary. While 57 percent of his made field goals are assisted, he's clearly a guy that New York can and does isolate. Amar'e is interesting in that he shoots far more often than any other player that is assisted on at least 50 percent of his clutch shots. In a sense, Amar'e is a recipient in D'Antoni's offensive system, but at the same time, that doesn't prevent defenses from keying in on him as an offensive focal point.

Another player with a similar categorization issue is Kevin Martin of Houston. Martin is assisted on a whopping 66 percent of his clutch made field goals (he's assisted on 59 percent of all total shots on the season). But he also creates and gets to the free throw line more frequently than anyone else on the recipients list. As a result, Martin could be deemed either a clutch "scorer" or "recipient." This issue perhaps underscores Martin's reputation as a highly effective scorer but an ineffective closer. While Martin gets to the line with extreme effectiveness, the majority of his made shots are set up by others.

As far as Ray Allen goes? The graph can be a little bit deceiving. Keep in mind that neither axis represents player efficiency. Rather, it's a snapshot of who creates how much over however many possessions. A rough way to envision the efficiency of the above players is as follows: imagine a straight line, oriented at 45 degrees, that passes through the center of the graph. Players above that line would be considered efficient; those below it would be considered inefficient. Perpendicular distance from this line would indicate overall efficiency. (Don't worry if this doesn't make sense; the last chart will put it together a little more.) In this case, David West and Kevin Love should be considered inefficient scorers, while each of the other players appearing above are efficient. Jason Terry is the furthest from this imaginary line, and thus the most efficient.

The next group of players is that of the creators. These players look to create for teammates; the majority of them actually up their assist percentages significantly in clutch situations. 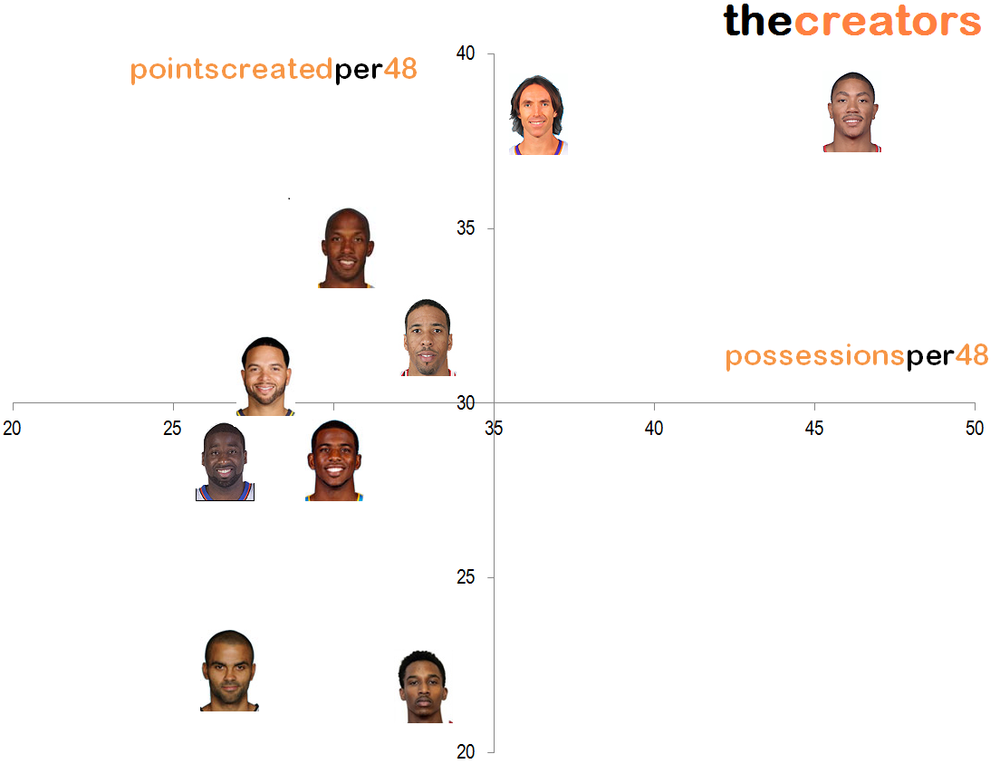 While most of these lead guards don't particularly distinguish themselves, Derrick Rose has shouldered an enormous amount of responsibility this season. Rose is one of the few players that quite clearly qualifies as both a scorer and a creator. He attempts 33.3 shots per 48 clutch minutes, second only to Kobe Bryant. His 9.4 assists per 48 minutes also rank sixth among qualified players. However, he actually does fall below the imaginary efficiency line as noted above.

Many of these point guards also play alongside a "scorer" that gets numerous clutch touches. Chauncey Billups is Mr. Big Shot, but Carmelo Anthony takes most of the big shots for Denver. Raymond Felton's primary big is Amar'e Stoudemire who we saw in the above graph. Tony Parker has Manu Ginobili in his backcourt.

Finally, the relative ineffectiveness of the NBA's best and second best point guards -- Chris Paul and Deron Williams -- speaks to the unreliability of the "clutch" stat as a whole. From 2007-2010, Paul (especially) ranked among the premier late game players in the NBA. This year, his numbers are down in the clutch, and they appear against the similar backdrop of New Orleans' abysmal offense.

Last but not least, we have the scorers. These are the players traditionally associated with "clutch." They may get plenty of points in the flow of the offense, but they also do a great deal of creating for themselves. 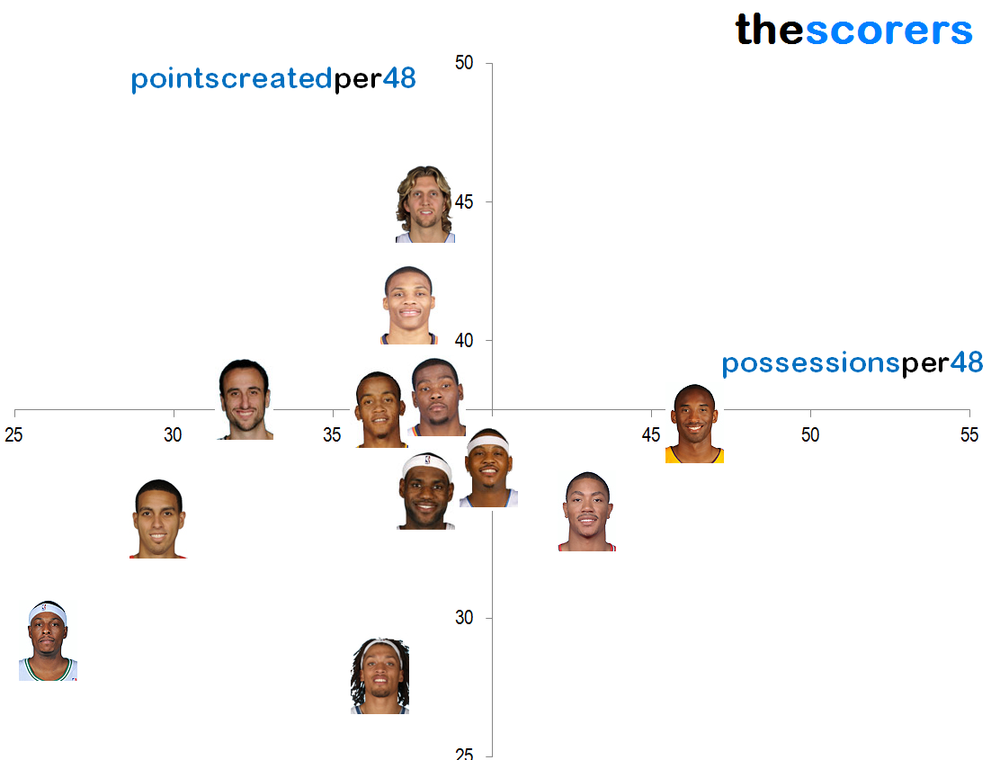 The larger number of players that appear on this chart isn't accidental. A significant percentage of NBA teams employ a single guy to attack defenses in late game situations; either they don't have the luxury of an elite point guard like a Steve Nash or they can't set up plays for an elite shooter like a Ray Allen.

The player that stands out immediately is Dirk Nowitzki. He accounts for as many late game possessions as Kevin Durant or Carmelo Anthony, but he's absurdly efficient while doing so. As Rob Mahoney wrote for the New York Times' NBA blog Off The Dribble this week, Dirk's high release point and excellent footwork are a lethal combination.

It's interesting that Russell Westbrook shows up on the scorer list and not the creator one. His assist numbers drop drastically in clutch situations, but he's been remarkably efficient at scoring the ball. In fact, he ranks a step above his heralded teammate, Kevin Durant. Derrick Rose also appears on this list, but his inefficiency relative to the league's elite scorers begins to emerge a little more.

Paul Pierce, Kevin Martin and Monta Ellis all fall on the "efficient" side of the imaginary line, though Pierce (especially) uses far fewer clutch possessions than one might imagine. Keeping in mind that these are per minute statistics, the argument that Boston has had fewer clutch minutes is rendered moot. Manu Ginobili is also an extremely efficient late game scorer, though like Pierce, he doesn't use as many possessions.

The extreme outlier is, of course, Kobe Bryant. The Mamba falls on the wrong side of the efficiency line, yet he uses a staggering amount of late game possessions. It's difficult to make blanket statements like "the Lakers are inefficiently distributing their clutch possessions" because of the multitude of factors involved ... but there are certainly indicators that it may indeed be the case.

Combining the scorers, creators and recipients onto a single chart, we get the following: 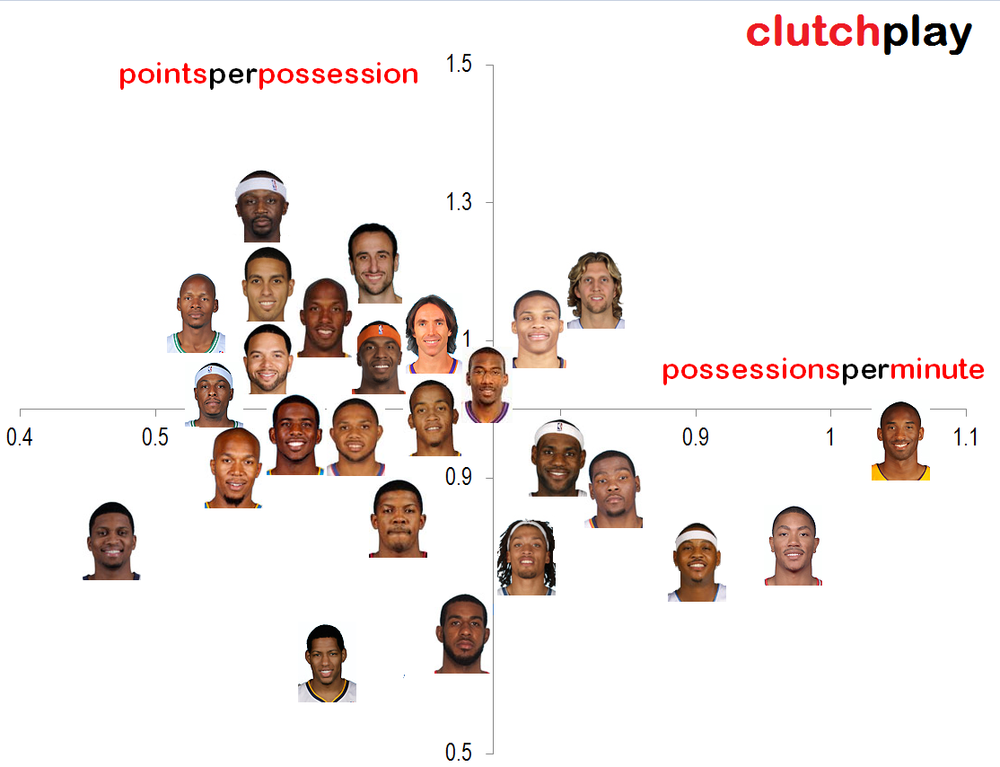 On this graph, there are no imaginary lines necessary. The vertical axis represents straight efficiency, and the horizontal graph represents usage. Possessions per minute are not adjusted for team pace. In general, pace tends to slow during the final minutes of close games as teams play in the half-court, but that by no means discounts some potential horizontal player movement on the above graph.

In general, two major trends stand out. Elite "recipients" tend to rank among the NBA's most efficient players in the clutch, and the "scorer" category of players tends to account for more late game possessions than any other. Another interesting aspect is the positioning of Danny Granger and Rudy Gay. Granger has been horribly inefficient in the clutch in 2010-2011, and Gay has used a minimal number of late game possessions.

But all of that said ... how reliable are these numbers? There's a school of thought that firmly believes that "clutch" is in the eye of the beholder. They contend that as fans, we see things that may not actually be there. We see Kobe hit a step-back 20-footer and credit his clutch ability, when perhaps we simply should have attributed it to the fact that he's amazing at basketball (in the 1st or 4th quarter).

There are rigorous methods of testing for statistical significance. Rather than dive into those, however, a glance at some yearly efficiency trends can be just as telling.

The next chart is a look at six of the NBA's most high usage players in the clutch over the last four seasons. 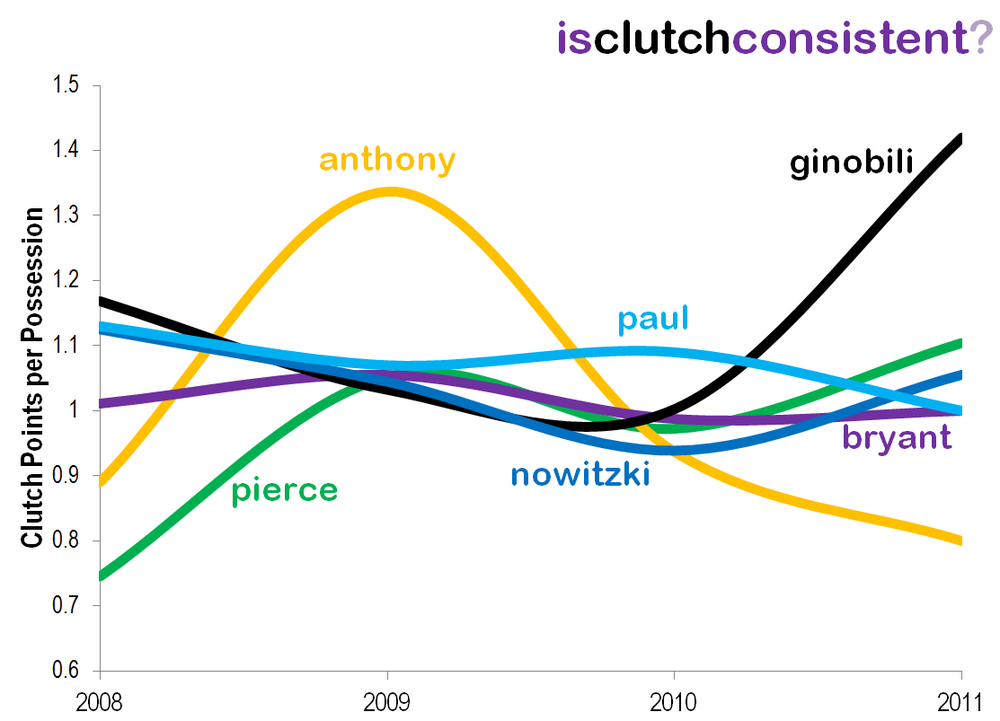 Anyone else reminded of those toys they gave you to play with at the doctor's office as a kid? It's simply up, down, up, down, and back up again. Sure, Chris Paul, Kobe Bryant, and Dirk Nowitzki have stayed relatively consistent with their clutch play. But what do we make of Manu, Carmelo and Pierce?

Did Paul Pierce "fold" in the clutch in 2008 and suddenly "steady" his nerves in 2009? Why was Anthony so ridiculously good in the clutch in 2009? Is Ginobili suddenly much more calm in pressure situations in 2011? The most likely explanation is that year-to-year, the sample sizes are much too small. They're prone to sizable fluctuations. Whether those vicissitudes are a result of luck or skill is very difficult to say. If a player is considered clutch this season, must he necessarily be considered clutch next year? How about week to week, or game to game?

Charts like the above are why the "clutch exists/does not exist" debate rages on. And perhaps we'll never truly be able to answer it.

VERDICT: Some supposedly "clutch" players have built their reputations on number of shots taken, rather than efficiency of clutch possessions converted. Some of the best late-game players in the NBA either have their shots created for them or primarily create for others; "clutch" doesn't necessarily imply scoring. And ultimately, there's the (very real) possibility that we're identifying patterns that simply don't exist.