Derrick Rose, Russell Westbrook, And The Year Of The Point Guard

Share All sharing options for: Derrick Rose, Russell Westbrook, And The Year Of The Point Guard

On Tuesday, the NBA named Derrick Rose and Russell Westbrook as its Players of the Week for the Eastern and Western Conference, respectively, continuing a season in which point guard play has arguably reached new heights.

The Year of the Point Guard, if you want to call it that, coincides with a great time in the field of basketball statistics. ESPN.com's John Hollinger and former Denver Nuggets consultant Dean Oliver led the charge several years ago, and we're seeing their influence today. NBA.com's John Schuhmann uses pace-adjusted statistics in his weekly power rankings on the league's official website, for instance, helping bring those stats into the mainstream. Broadcast teams, most notably the Orlando Magic's duo of David Steele and Matt Guokas, also mention pace and efficiency, which further helps the statistical cause.

Fairly new statistics, such as Offensive Rating and Defensive Rating, attempt to gauge the efficiency of a given team's offense or defense by adjusting for the team's pace. The emphasis on efficiency carries over into how we evaluate individual players as well, looking not only at their points per game, for example, but also their shooting percentages and possession usage.

I wanted to apply the new statistical wisdom to today's starting point guards -- all 30 of 'em! -- to measure their efficiency with two new-wave statistics; you'll see the result below. The x axis shows True Shooting percentage, which accounts for a given player's scoring efficiency by adjusting for free throws and three pointers. The y axis shows Pure Point Rating, an improved version of assist-to-turnover ratio of Hollinger's design which adjusts for minutes played, and the commonly accepted fact that turnovers are more harmful than assists are helpful.

The median starting point guard has a True Shooting mark of 54.4 percent and a Pure Point Rating of 6.2, which is where the axes intersect. This, in turn, gives us four quadrants, helping us to better categorize each player with regard to their scoring and passing efficiency. Here are the results: 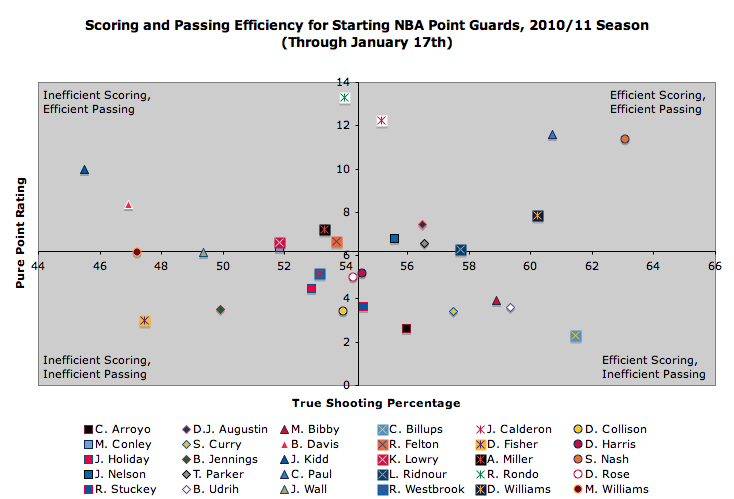 Apologies to Michael Conley for making his marker barely visible; Kyle Lowry blocks his off. My bad, Mike.

Here, we see that Nash, Paul, and Deron Williams combine lethal efficiency with regard to scoring and playmaking, while Derek Fisher does the exact opposite. Remarkably, eight point guards rank better than the median in both shooting and passing: Nash, Paul, Williams, Jose Calderon, D.J. Augustin, Jameer Nelson, Tony Parker and Luke Ridnour. Some of those things are not like the others: Calderon, Augustin, Nelson, and Ridnour are respected to varying degrees around the league, but are never brought up in any reasonable discussion of the league's top point guards. Also, what the heck happened to Westbrook and Rose, our Players of the Week?

They're languishing in the same sad quadrant with Fisher, Brandon Jennings, Mo Williams, and others. If efficiency told the whole story, 30 out of 30 NBA general managers would rather have Ridnour on their team than Rose. I don't think Ridnour's family would even contest the point that Rose is a far more effective player than Ridnour. So we've got a problem.

What raw efficiency stats don't account for is -- and I apologize if this point is too obvious -- productivity. Rose's and Westbrook's teams rely on them to soak up a lot of minutes and eat a lot of possessions, so they're going to pile up plenty of stats in their extensive floor time. Versions of usage rate help quantify the extent to which a given player dominates the ball, but I'm not interested in usage rate right now. Let's look instead at the points (x axis) and assists (y axis) these 30 hoopsters tally, on a per-minute basis, to see what our earlier survey of efficiency missed. The median values are 15.4 points and 7.6 assists per 36 minutes, which is where the axes will intersect. 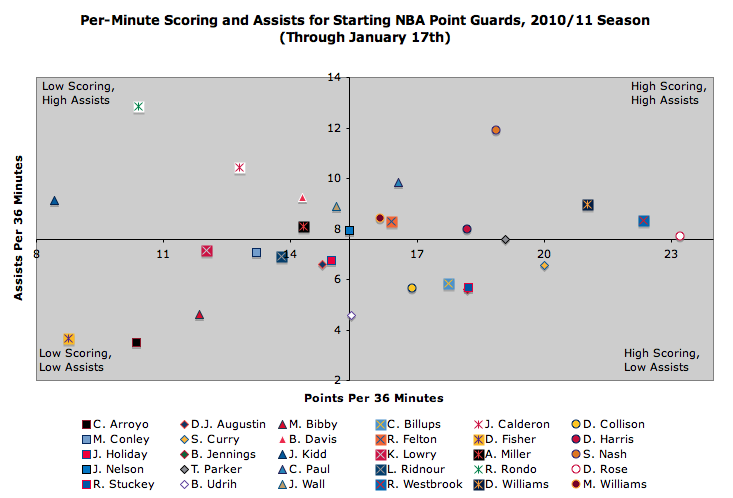 I assure you I didn't omit Brandon Jennings from this graph; rather, Rodney Stuckey obscures Jennings' point from view.

BOOM! Suddenly, Rose and Westbrook look like worldbeaters, ranking first and second in per-minute scoring while holding their own in the assists department. Familiar names -- Nash, Paul, Deron Williams, Nelson, and Parker -- abound in the good-scoring, good-passing quadrant. Calderon moves to Rondo's corner of OK scoring and good passing, while Augustin and Ridnour suddenly find themselves in the Fisher Zone.

In total, half the players maintained their standing when we shifted gears from efficiency to productivity, while the other half moved to a different quadrant. The biggest change? Rose, Westbrook, and Mo Williams moved into the positive, in both scoring and passing, from the negative.

It's interesting to note the disparate quality of the point guards for contending teams. The only thing the Lakers and Heat ask of Fisher and Carlos Arroyo, respectively, is to bring the ball up the court and then make themselves scarce. You'll see them in the low-scoring, low-assists quadrant on the productivity graph, with the Atlanta Hawks' Mike Bibby, aging gracelessly, not far away. The Celtics' Rondo, though, is involved in darn near every offensive play, setting the table beautifully and thus leading the league in Pure Point Rating. The Spurs rely on Parker to score better than a point every two minutes while maintaining positional-average distributing chores, as seen in the second graph. Nelson's in the same spot, only with Parker's scoring and assists responsibilities reversed.

In a weird way, Chauncey Billups has become the anti-Fisher. He doesn't make plays much anymore, but still shoots often, and efficiently, befitting his role with the Denver Nuggets. One wonders how potent the Lakers would be with Billups, who isn't dissimilar to Fisher in terms of size or off-the-ball offensive skill, filling Fisher's shoes.

In a broader sense, these analyses show the necessity of blending approaches that account for efficiency and productivity when it comes to evaluating NBA players. But they also show, on a smaller scale, we're lucky to live in interesting point-guard times, no?