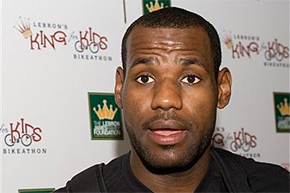 There's a new chip in NBA collective bargaining, one of 10,000 or so lining the negotiating table. It's the franchise tag, an NFL tool well-loved by team owners and despised by elite players. ESPN's Chad Ford reports that there's a growing movement to push the franchise tag into the owners' request as the league and its players' union work out a new deal in time for the 2011-12 season.

Ford reports that the franchise tag has caused a minor split among owners; big market teams like the L.A. Lakers and New York Knicks, after all, like poaching stars from less glamorous teams. The franchise tag would hurt their ability to do so. But where the real drama could come is on the players' side, where stars will fight tooth and nail against the franchise tag while the rank-and-file of the union probably won't be too worried about it.

The franchise tag would be a huge power-killer for the league's very best players and their agents. Superteams would again be organic. Free agency would be neutered. Teams would be unafraid to lose their young stars, and might be more likely to work on team-building than star-grooming.

But would it matter for the bulk of the NBA? There's the argument that tamping salaries down at the top of the league pushes down everyone else; a receding tide drops all boats. But the volume is important. If the franchise tag causes a player like Derek Fisher to make $2 million instead of $2.5 million, how important is it? The impact here is almost exclusively on players in the top two tiers of the league: the superstars who won't be able to leave and the "second bananas" who end up getting tagged when the superstars sign multi-year deals. Perhaps 50 players are severely impacted. You know how many players are in the NBA? More than 400. So about 12 percent of the league will be seriously affected by a franchise tag.

Meanwhile, 100 percent of the league's players will be seriously affected by a full-season lockout, and the players at the bottom end of the league -- the guys making less than $5 million -- are the ones who need to work. They don't have $10 million endorsement deals, or $100 million in basketball earnings in the bank. They need to work, and a stoppage kills them. The franchise tag? Eh, it's not great, but it's not the worst thing.

Now keep in mind that all of those star players likely affected by the franchise tag going forward -- Dwight Howard, Chris Paul and hell, maybe Carmelo Anthony -- are represented by the same agency, CAA. That agency will be fighting hard -- tooth and nail -- against a franchise tag. It saps the agents' power! It saps the stars' power!

But what of the other dozens of agents with their hundreds of clients? At what point do the rank-and-file of the NBA stand up and put their own needs -- for money, now -- in front of the needs of the super-rich? We might just find out this summer.