The State Of The Union In The NBA: Can Blake Griffin Win The Future With The Clippers?

Share All sharing options for: The State Of The Union In The NBA: Can Blake Griffin Win The Future With The Clippers?

Tuesday night, President Obama took to congress to deliver the annual State of the Union address, and it was an ambitious, bi-partisan address to the nation that set a promising tone for the next twelve months. Or, um, it wasn't. It was an arrogant, hypocritical combination of false rhetoric and faulty logic. How you feel about the address depends on where you look.

And believe what you want, but this much is certain—it doesn't get much better than Obama's new rallying cry ("Win the future") and his confidence-boosting explanation of America's greatness ("We do big things"). Also, Joe Biden and John Boehner belong in a buddy comedy.

And speaking of unintentional comedy, can you imagine a foreigner watching this spectacle? I mean, our proximity to it probably mutes some of the absurdity, but just for the record, whatever the state of our union is, the actual State of the Union is totally ridiculous. Not necessarily the concept, but certainly the actual speech. It goes like this:

[President reiterates policy suggestion he's made elsewhere] [One side applauds vigorously] [Other side makes it very clear they are NOT applauding] ... [President relates anecdote involving small-town American] [both sides applaud, violently] [Joe Biden breaks into a s**teating grin] ... [President talks about immigration reform] [Camera pans to 80-year old John McCain] [Moves to you hispanic boy, surrounded by old white men] ... [President that's been accused of being Muslim declares Americans who are Muslims are part of this country, too] [Biden grins, while an overly-tan gentleman shifts uncomfortably, visibly unhappy] [half the room applauds].

...And that's only like five minutes! That whole song-and-dance goes on for a solid hour, and that's before we even get to the multiple rebuttals, and all the different networks "grading" the performance. People always want to point to Jersey Shore or Idol or obesity statistics as the epitome of our country's self-indulgence, but I'm telling you, the State of the Union doesn't get nearly enough credit.

Anyway, for all of its annual absurdity, President Obama's address sparked an idea. What about a State of the Union for the NBA? Not like David Stern's annual press conference at All-Star Weekend. That's like, 90% propaganda. How are we really doing? So, instead of getting lost in the vacuum of political analysis this morning, let's take a step back and look at the bigger NBA picture. A nod to the Spree party, not the tea party. Who could possibly vote against that? 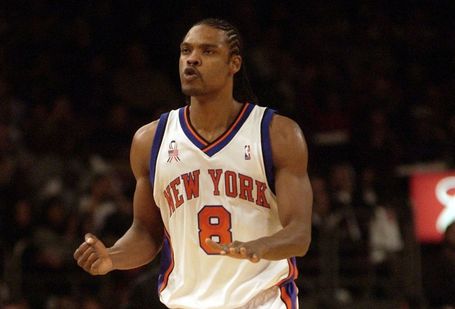 Mr. Stern, Mr. Hunter, members of basketball media, agents, players, fans across the United States, and Worldwide Wes. Good morning, and welcome. And as we mark this occasion in January 2011, I'd just like to say... Have you guys seen Blake Griffin lately?

Holy s**t. It's no secret that many of us have our differences in looking at this league. Whether it's been about contraction, salary caps, the Lakers and Celtics, or simply deciding whether or not it's okay to hate LeBron James, the debates have been contentious. And that's a good thing. It shows we care. But if there's one thing we can agree on, isn't it Blake Griffin? He's the story of 2011.

I mean, the guy is like a combination of Karl Malone and Shawn Kemp. Did you ever wonder what it would look like if Karl Malone could jump like Shawn Kemp? I bet you didn't, because that would be a waste of time. But here's Blake Griffin, making it a reality. He's like Wolverine mixed with Xavier McDaniel. You can't stop him, you can only hope he doesn't kill somebody by accident.

But more than that, Blake Griffin is a reminder. A reminder that regardless of the problems that we see on a daily basis, the game is evolving. Every year, new players come forward to broaden our imaginations, and brighten the future. We don't know how good Blake Griffin will be when all is said and done, and we can't say whether he'll be good enough to help the Los Angeles Clippers win the future. But in the meantime, Blake Griffin personifies the game's capacity to sustain itself.

Even the 1980s don't compare. The romantic ideal of the NBA's glory years is not easy to shake, but look closer at the era of Bird and Magic, and you'll see a league rife with inequality. Top-down economics may have created a glittering facade, but a closer look reveals cracks. Beyond the Celtics and Lakers and Pistons, who truly resonated?

Besides, you don't judge a society by its richest members. It's the middle class that speaks best to overall health. And in 2011, instead of a trio of dynasties towering over a middling center, the league's center is what stands out as strongest. Just look at these teams:

All of those teams are good, exciting, and capable of beating elite teams (and each other) in a seven game series. And with that kind of depth at the league's center, we're guaranteed competitive basketball every night of the regular season. Isn't that the American (basketball) Dream? Just wait until the playoffs get here, when each of those teams goes to head-to-head with each other and  teams like the Heat and Celtics, or Lakers and Spurs. It'll only get better. And that's been the NBA the past few years. Only getting better and more prosperous. So, in a broad context, make no mistake—the state of the union is as good as it's ever been.

But it's not perfect, obviously. 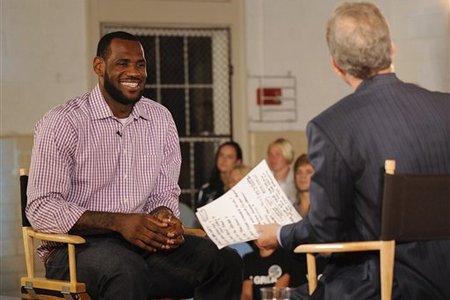 It's become clear that LeBron James' decision in 2010 was a "game-changer" as President Obama would say. When LeBron left Cleveland to join forces with his friends and fellow superstars in Miami, it created a blueprint for future superstars to do the same. In the end, it was probably inevitable.

The players have realized that they have more leverage than ever before, and they're going to use it. Carmelo Anthony has been the face of the Denver Nuggets since 2004, but on the brink of free agency, he's made it clear that he's ready to leave. Denver's been forced to choose between trading him, or risk losing him for nothing. Of course, it's not that simple.

Carmelo would have gotten traded to the Nets a few weeks ago, but he refused to commit to a contract extension, and a trade fell apart. In other words, even in a trade scenario, Carmelo Anthony has all the power. Here's a player under contract, essentially acting as a free agent, all while he plays for the Nuggets every night, forcing teammates, coaches, and fans to embrace a player that's clearly rejected them. Isn't that a little problematic?

Or look at Ricky Rubio, the Timberwolves' savior that, so far, has refused to play for the Timberwolves. Now, according to sources, he wants to play with LeBron and the Heat. Or the Celtics. Or the Knicks. But... Definitely not the T'wolves. And where does that leave Minnesota?

See, there's more depth than ever at the league's center, but at the bottom, it's hard to believe in hope and change if that lottery picks that come with suffering are destined to flee for better teams by the time they mature into franchise players. The players have more power than ever, and teams like Minnesota, Cleveland, and Denver are essentially helpless by comparison. That dichotomy—and how to solve it—is a question that will shape the future of the league.

The answer could mean an NBA franchise player tag. It could mean giving players a greater premium for re-signing with the teams that drafted them, along with salary cap exemptions to teams that re-sign their franchise players. If Cleveland could have offered LeBron James an extra $25-30 million, would he still have left for Miami? And considering LeBron James leaving Cleveland has made the Cavaliers about $200 million less valuable, wouldn't it be worth it to pay an extra $30 million to keep a player like that?

It's true, the game has proven it can sustain itself after the reign of superstars like Larry Bird, Magic Johnson, and Michael Jordan. In 2011, the NBA's healthier than ever. Just look at the way Blake Griffin's revitalized the Clippers. But now, looking up and down at the state of the NBA, we have to ask: Can the Clippers sustain themselves if someone like Griffin has the power to flee for Oklahoma City once he has the chance?

Griffin's still a rookie, and already his free agency is the subject of unnerving speculation. Can Sacramento be saved if Tyreke Evans decides to leave in the middle of his prime? It's questions like these that make it harder for some fans to keep the faith. Just ask Cleveland where that gets you.

In that way, 2011's unrivaled prosperity brings with an unmistakable uncertainty. We're on the brink of the most intriguing playoff seasons of all time, but the teams on the outside—Minnesota, Cleveland, Denver if they lose 'Melo—are further away from prosperity than ever before. A society's middle class may be the ultimate barometer for health, but how a society treats its lower class is a better indicator of overall virtue. And right now, the NBA's lowest class isn't in great shape. After the playoffs, it'll be up to the players and owners to solve that problem.

So yes, the NBA is winning the present. But the future will be more complicated. Revenue sharing, superstar contracts, and ensuring equal opportunities for NBA franchises—the economic landscape is more complicated than ever, and regulating the market won't be easy. But if we want to avoid contracting teams and abandoning markets, isn't it imperative?

That's where the NBA is right now. As healthy as ever, but slowly coming to terms with serious questions about the future. And in the end, even if there's a lockout, it'll get worked out. It always does. As Obama says, "We will not relent." The game is too good, and we love it too much.

In the meantime, seriously, can we talk about this Blake Griffin guy?