Share All sharing options for: Mapping The NBA's Top Scorers: Carmelo Anthony's Points Are Worth Less Than Kevin Martin's

Not all 20-point scorers are created equal. The NBA currently has 21 players averaging at least 20 points a game, from Carlos Boozer's 20.6 to Kevin Durant's 27.9. But there are a million ways to get 20, and not all of them are good. You've heard criticisms of "volume scorers." This exercise seeks to put that concept into a visual presentation so the league's top scorers can be compared. Or, in other words, so that I can tell you Carmelo Anthony's 23.7 points per game are not worth as much as you'd think.

Not everyone is hip to the staple advanced metrics of basketball, so let's explain the one we're using here: True Shooting percentage (TS%). Field goal percentage (FG%) itself -- that's makes divided by attempts -- is problematic because not all shots are worth the same amount. If Dwight Howard shoots 4-8, all on two-pointers, his FG% is .500 and he's scored eight points on eight shots. Say J.J. Redick shoots 4-8, but they are all threes. His FG% is .500 -- identical to that of Dwight. But he's scored 12 points on eight shots. That's a lot more points!

There is the matter of getting to the foul line. Free throws are the most efficient way to score in the NBA. The league shoots around 75 percent from the stripe on average. So a trip to the line for two will earn, on average, 1.5 points. To get that same return by just shooting field goals, a team would have to shoot 75 percent on twos or 50 percent on threes. Neither of those will happen, ever. So it remains: free throws, and the ability to both earn and hit free throws, are highly valuable. But there's nowhere in FG% to recognize that.

TS% fixes that. The mechanics of it adjust for and-1s and technical fouls by estimating that multiplying FTAs by 0.44 gives you the number of actual two-shot trips to the line a player earns. The actual formula ends up being

That gives you a value typically between .400 and .650. League average is .539 this season -- it's typically right around .540. Anything below that is fairly icky; up around .600 is elite territory, especially for top scorers. The more shots you take at a highly efficient clip, the better it is for your team. But if you need tons of shots to get your 20, that's trouble.

And this is where Carmelo Anthony and Kevin Martin come in. Click to enlarge, or alternately, shrink yourself to 1/20th size. Then this will look huge! 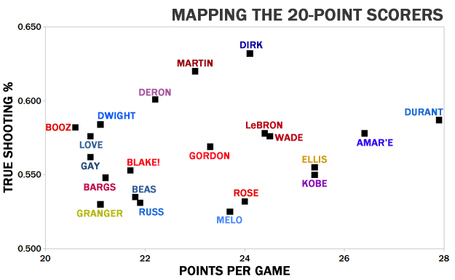 Scoring is oriented on the x axis; efficiency, expressed by the aforediscussed TS%, is oriented on the y axis. Durant and Ama're Stoudemire lead the pack by a fair margin in points per game, and both score big on well above average efficiency. Kudos. Monta Ellis and Kobe Bryant hit at just above average efficiency while scoring more than 25 points a game; commendable work, gents. LeBron James and Dwyane Wade, the twin cores, are right behind and quite efficient. Dirk Nowitzki is a monster of epic and unattainable proportion. Seriously, he must be stopped.

Now we're getting to the problems. Like Derrick Rose, who scores an excellent 24 points a game, but does it at .532 TS%. Six Bulls rotation players shoot more efficiently, some (like Carlos Boozer) much more efficiently. So Rose could stand to pass more frequently. He needs to rein it in, though it can't be ignored that he has basically an entirely new supporting cast, as well as a brand new system to run.

But look at 'Melo: 23.7 points per game on .525 TS%. Excepting Kenyon Martin, who just returned from injury last week and has just five games under his belt, there is one Nuggets' rotation player with a TS% lower than Anthony's: Shelden Williams, who takes 4.8 field goal attempts per game. Melo, when you add in his free throws, takes about 23. So you're getting 23.7 points a game from Anthony's 23 shots.

This isn't a commentary on 'Melo trade talks, and the ha-ha that rises in my stomach when I hear that Denver shouldn't consider taking Martin back in a potential 'Melo trade with Houston. Anthony has different value. His bevy of moves certainly, in my opinion, helps him score late in games, when defenses are keyed and everyone knows he's getting the ball. Clutch is the Tooth Fairy, but I believe some players' games are more well-suited for crunch time. 'Melo fits that, and there's value there. But not nearly as much as you'd think, and Carmelo Anthony's 23.7 points seriously aren't worth what you'd think they'd be. You need points to win games, but as Martin and Nowitzki show, there's a better way to get them.