From Dwyane Wade on down to Robert Sarver, we offer up The Hook's latest NBA Lockout Power Rankings. Want The Hook delivered to your Facebook News Feed daily? Like SB Nation NBA.

The NBA lockout talks are picking up steam, with the first day in what could be a long session of negotiations in the books. We had an All-Star screaming at the commissioner, the most overpaid player in the league wearing flannel and a skullie and bad jokes from middle-aged bankers. The lockout ... it's FAN-tastic. Let's power rank this mug in a special weekend Hook.

1. Dwyane Wade. The floor is yours, NBA.com tag team of Steve Aschburner and David Aldridge:

A source told NBA.com's David Aldridge that at one point, NBA commissioner David Stern was emphatically directing a comment -- and pointing his finger -- at Wade, the Miami Heat's All-Star guard. Wade objected and interrupted Stern, reportedly saying: "Don't point your finger at me. I'm a grown man. I have children."

The meeting broke at that point. A few minutes later, Stern reportedly sought out Billy Hunter, NBPA executive director, to say he wanted to apologize to Wade. A short time later, the session resumed.

OK, wow. Bless you, Mr. Wade. Bless you. I think all of us observers of the NBA can imagine Stern pointing that finger, making whatever point it was he was making. The commissioner is the king of condescension -- just ask any beat writer who has dared ask a less than brilliant question -- and for a player to call him to the carpet ... wow.

That's not all. From Adrian Wojnarowski and Marc J. Spears:

Wade, of course, is not just any player. He's a Finals MVP, a perennial All-NBA entrant and a player on the path toward being considered one of the top guards in history. And he's yelling at Stern and -- this is the real trip -- getting an apology? Amazing. You're a hero to so many, Mr. Wade. Now let's hope you survive to revel in your glory.

2. Fisher's Army. You'll forgive me if I have embraced the "owners are Death Eaters, Stern is Voldemort" narrative; there's no hope for me. If you accept that as a legitimate point of view, then to hear how the league's stars responded to continued league lowball offers is pretty spectacular. From Ken Berger:

The players decided to return to the bargaining room with a much smaller group. Among those joining Fisher for the second session were James, Wade, Anthony, Kevin Durant, Baron Davis and committee member Chris Paul. None of the players joining Fisher sat down during this portion of the talks, a person with knowledge of the meetings said.

3. David Stern. Now all of the yelling and show of power and visual swag stuff is great for us. Especially those of us with a bias toward labor in most (if not all) such negotiations. It brings true conflict and drama to the proceedings; if we're going to miss basketball, we might as well get a lockout that gets the blood pumping a little, you know?

But none of it actually matters. In fact, it all may benefit Stern. When we imagine Stern going to apologize to Wade after the showdown, we imagine the commissioner cowed and put in his place. But he's still DAVID STERN. And he showed a willingness to act in humility to keep the talks going. He didn't show a willingness to come off of the owners' revenue split proposal that offers 46 percent of the league's income to players over 10 years. Which one's more important to Stern and his constituents, the swag-off or the dollars? Exactly. Stern kept the union in the room and didn't budge on money.

And guess what? I'm a rosy a union advocate as anyone, and I'm dead positive the star players who led Friday's fight are going to disappear. Chris Paul is supposed to have a charity game in North Carolina on Saturday. Is he going to cancel? Wade, LeBron and 'Melo have s--t to sell. Are they going to stick around Park Avenue? Baron Davis has Eddie Bauer coupons to use. Kevin Durant has summer games to play (somewhere, everywhere). Andre Iguodala has trade demands to not make. These dudes' time is lucrative, and if the season is going to start at some point, their summer window of earning will be over. Can Fisher keep the crew together if it takes until Wednesday to hammer something out?

I doubt it, and I bet Stern doubts it, too. Notice that no reports suggest Stern caved on any of the league's negotiation points. If this was the union's show of immaculate power, it didn't exactly do anything, did it? It's safe to assume that Stern remains the master of his domain ... even if Wade dunked on him.

4. Robert Sarver. On a similar note, you have to tip your hat to the Suns' owner for apparently being the only owner willing to say it to the stars' faces. Again from Woj and Spears:

Once again, Phoenix Suns owners Robert Sarver was the most vocal proponent of the owner's case, and he befuddled players by insisting that his wife had asked him to bring back the middle level exception in a designer bag.

"Guys, I really want to let you keep 57 percent and all of that, but my wife is killing me over here. I need something to take back to her lest I'm the one getting locked out, nahmean nahmean (*nudge*) nahmean?" Can't bust a dude for trying.

5. Baron Davis' Stylist. Because Lumberjack Hobo is always in. (I learned that from Tim Gunn.) 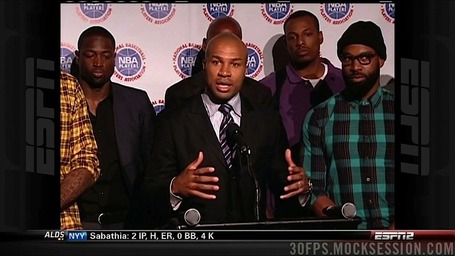 6. Small markets. Stern told everyone about his revenue sharing plan, one of the three major economic hurdles to get over this offseason. Hurrah! We don't know the specifics, just the top line. And that top line is that revenue sharing will triple next season (to something like $160 million) and quadruple in three years (to $210 million or so). No one outside of the room has any idea of what that actually means -- hell, it could all be tied to the monster luxury tax, in which case it's never getting paid -- but in theory it's good news for small or low-revenue markets. Revenue sharing has long been a sore spot for the NBA, not because higher payroll leads to championships, but because payroll inequity significantly disadvantages low-revenue teams who can't survive while rebuilding. When a low-revenue team hits a down cycle, it threatens the viability of the franchise. Helping them thrive is good for the league. If this helps in a major way, it's as important as anything that comes out of the bargaining room.

7. Udonis Haslem. One of the meanest guys on the court was one of the league's most positive players on Friday. He's like a kid out there. From TrueHoop:

I heard enough to really believe in my heart that both sides will work tirelessly to find a middle ground. 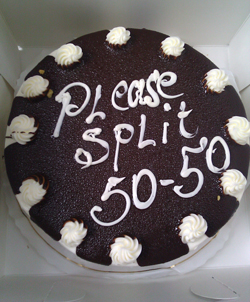 8. Ken Berger's cake. The CBS Sports scribe had a cake delivered to Tuesday's negotiating session between the league and union. No, really. It's over there to the right. If this deal gets done soon, I think we can totally credit Berger with icing the path to compromise.

9. Kobe Bryant. I spent Friday's Hook on a nod of respect for the Black Mamba, and that continues as he pushes for a deal in Italy despite the best efforts of the club that wants to land him. Bryant is reportedly working with the Italian league itself to find a solution to scheduling issues so that he can play a few games for Virtus Bologna. While some argue Kobe would better serve the union by joining his rivals in New York, I think that he's right where he needs to be. Trust me, LeBron and Wade and the guys are doing their job. Kobe's angle is a little different. He's showing the owners -- specifically his team's owner, Jerry Buss -- that if the league doesn't want to profit off of his name and his game, he'll help someone else do it. Kobe has always had the image of a guy always playing, always in a gym. (It's an image he's helped manufacture, though there's obvious truth in it.) What better way to flex his power than to threaten to play during the lockout by being in negotiations to play during the lockout as the stoppage reaches a critical moment? I don't think Kobe could be as threatening in New York as he is in Bologna.

The NBA lockout talks begin again at 10 a.m. ET on Saturday in New York. You can watch live on, uh, Twitter. God, I miss basketball.