The NBA Lockout, And More Good News For People Who Love Bad News

The NBA lockout continues for another week, and with a prospects for a deal looking dire as ever, the pessimists are playing right into David Stern's hands, imploring players to take a deal. But here's why the players should stay strong.

Share All sharing options for: The NBA Lockout, And More Good News For People Who Love Bad News

The NBA lockout has dragged on for months now, and after flirting with a resolution for a few days last week, the owners and players' union sent us crashing back to earth on Friday. No deal. More cancelled games. Nobody's blinking.

Not that we should be surprised by any of this. By now the pattern's pretty clear. The NBA schedules meetings with the players' association, they meet for 10, 12, and 15-hour stretches in a five-star hotel in Manhattan, and everyone holds their breath hoping for a miracle. When we don't get one, David Stern dutifully marches toward an army of delirious reporters and blames the players' association for being unreasonable. Then Billy Hunter speaks for the players, and we hear how unreasonable Stern has been. It's all part of the playbook, and the playbook belongs to David Stern.

The idea is that as both sides inch closer to a deal, only to have it collapse again and again in the most public fashion possible, both the fans and the NBA's rank-and-file players will get impatient and wonder what the hell is holding things up. Then Stern and the NBA, along with well-dressed "experts" like Darren Rovell, will try to capitalize on the resentment with half-baked number-crunching like this:

And reporters resentful at both sides will weigh in with analysis like this:

If Hunter had been willing to move from 52.5 percent to 51 percent Friday, that would've been a $60 million concession in Year One of the deal to get back the lost games worth $400 million -- a net gain of $340 million. Instead, the players decided it was better to lose the games, and thus $400 million, which made it a $740 million decision to walk out of the room without a deal.

See now that's just ridiculous--we'll get to that in a minute--but it's coming from probably the most respected lockout reporter in the business, Ken Berger at CBS Sports. In other words, Stern's strategy is working. The longer the NBA lockout bludgeons fans and players with the monotony of never-ending negotiations, the more punch drunk we all become. They love this bad news because all the anger and despair makes it harder for everyone to be rational.

So let's clarify something about what Rovell and Berger mentioned.

But the biggest reason the players can't afford to sacrifice anything more has nothing to do with this year, or even the 10 years they're haggling over. Because whatever the players negotiate now will be the starting point for any and all negotiations in the future.

Over 10 years, each percentage point is worth $477 million. But what about in 25 years? When you think about the way this affects future generations of superstars and role players alike ... Is it really selfish or foolish for today's players to draw a line in the sand?

That's the twist, though.

The longer this argument lasts, the easier it is to forget what they're arguing about. 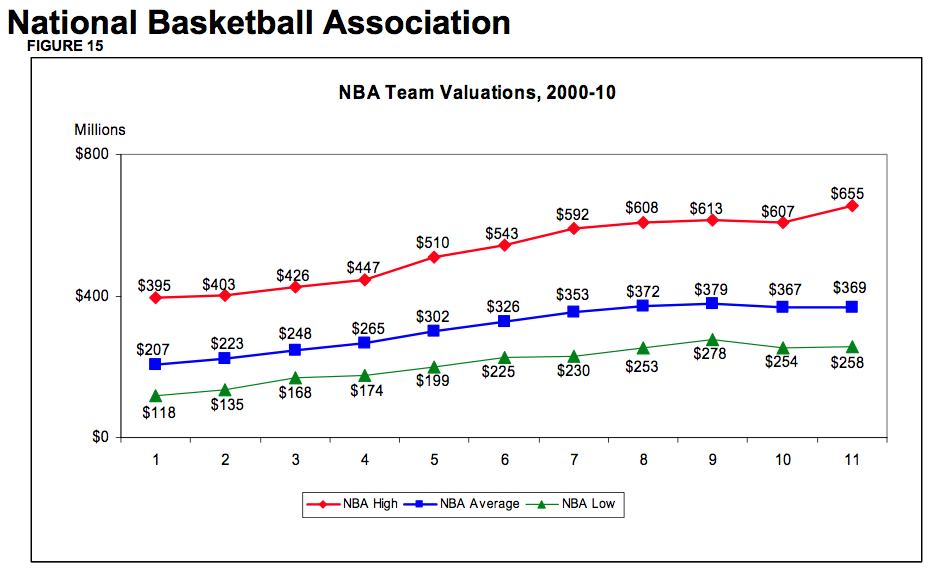 So lest we lose sight... Pictured above is the 10-year growth rate of NBA teams. It comes from a market report on professional sports by a sports finance group out of San Francisco. According to the numbers, the average team has become 79 percent more valuable since the year 2000.

Over that same period, the New York Times reports player salaries, "have followed a nearly identical trajectory to league revenues, having grown at a 24 percent rate over 10 years."

We're comparing two different businesses here -- the business of owning a team and the business of playing for one -- but the juxtaposition is important. While everyone talks about splitting revenue "50-50", there's another area that experienced 50% more growth than revenue or salaries.

What makes the lockout frustrating is that the NBA is telling fans and players that those numbers are irrelevant. As David Stern says, "The current model is broken." And it doesn't matter if the average NBA team has become 80 percent more valuable with the system we already have.

The argument says that the players make too much money, and NBA teams are no longer a worthwhile investment. That a team like the Philadelphia 76ers -- which paid $69 million in player salaries in 2010 -- can't make a profit with the $111 million in revenue it brought in, and it's the players' fault that $42 million in surplus revenue turned into a loss. The NBA doesn't want us to care that the 76ers were just sold for a $150 million profit over the initial 1996 investment. Nope, we're all supposed to focus on the $1.2 million the Sixers reportedly lost in 2010.

And the players have agreed. They've offered to cut their salaries, swallow widespread changes to free agency, and overhaul a system that's seen the NBA's investments grow steadily over a 10-year span. No, where the lockout goes from "frustrating" to "infuriating" is that David Stern and the owners are ignoring the concessions they've gotten, trying to squeeze that last 2 percent from the players.

And you know what? Screw that.

It's bad enough that David Stern and the owners have successfully made something like a million dollar loss more relevant than a $150 million profit, but now the players' refusal to sacrifice $950 million overshadows the $2.2 billion they've already sacrificed. It's disgusting. So disgusting that it was actually worth it for me to look up the numbers and pore over a financial reports and get out a calculator and stuff -- just to see how disgusting the whole thing is.

Mind-numbing math and mind-bending rhetoric distorts the issues and drives everyone crazy, and it only gets worse the longer the lockout lasts. The owners and David Stern love the bad news and disappointment when deals fall apart, because it just distracts everyone a little more.

But it doesn't change the truth: NBA players are getting screwed here, and the reason we're not playing basketball is because Stern and the owners think they haven't been screwed enough. Owners can't make money despite rising revenues, and they're embarrassed. LeBron James proved that he's more powerful than Dan Gilbert, and that was embarrassing, too. And the combination of empowered players and their own failed management has them scared. So, embarrassed and scared, the players have become the owners' scapegoat, and about half the NBA owners don't want to stop this lockout until the players are not just beaten, but humiliated. That's why we're not getting ready for the NBA this week.

The combination of greed and deception makes a Wall Street parallel pretty tempting, but I'm not going to let David Stern turn me into some goddamn hippie. I will say this, though: If an owner's worth a billion dollars and his team lost $5 million in 2011, that's equivalent to someone who makes $40,000-a-year losing $200. Or, about what it costs to buy a lower-level ticket to an NBA game.

We make that sacrifice over and over again, even though the tickets we lose money on today won't be 80 percent more valuable in 10 years. We sacrifice financial sanity because we love basketball. The players have already sacrificed $2.2 billion, too. But the owners aren't willing to lose a goddamn dime without asking the players to pay for it. So forget basketball: Here's to hoping the lockout drags on for another week. Another month, the whole year, whatever. Whatever it takes.

Same to everyone who believes the players should cave because the owners have all the leverage. Come on. Owners have all the leverage in any labor stand-off. It always looks bad. It's always a game of chicken. But the bottom line is what's happening to the players isn't necessary for NBA owners to survive and thrive. It's all about a number of bruised egos trying to make a point.

But Aldridge's biggest assumption is that the bruised egos have all the power among NBA owners. They do now, but what about when it really comes time to cancel the season? Guys like Jerry Buss, Mark Cuban, James Dolan, Micky Arison... They're business men, too, and rational enough to see that it's bad business decision to risk long-term damage to the brand, miss valuable years of their superstars' prime, and lose out on millions of dollars from TV and sponsor revenue. For the more successful "big market" teams, missing a season costs more than you'd think.

For now, the owners have kept money from TV deals, but if the season goes under? Then they have to give all that money back. Suddenly they jeopardize longstanding sponsorships, too. For now the brand's okay, but if the NBA misses the whole year? Suddenly the NBA looks like the NHL, and the casual audience goes elsewhere. And why? For an extra 2% that means a thousand times less to billionaires than it does to millionaires?

Eventually the other egos in the room will win out. Dan Gilbert and Robert Sarver can only hijack the league for so long before lifers like Buss and Jerry Reinsdorf take a stand. Or before recent additions like Wyc Grousbeck or Mark Cuban get impatient, point to the big picture, and start asking why it makes sense for their teams to miss out on one last chance at an NBA title. David Stern may be doing his damnedest to distract us from the big picture, but the owners see it themselves.

There's good news in all this that gets ignored. On the whole, the NBA's growing, and all but a few NBA teams are doing just fine. The rise in expenses has paled in comparison to the rise in overall value, and the system's about to get a whole lot more favorable. No matter how hard David Stern tries to make the NBA look like the NHL, there is no battle for survival. There's billions in TV revenue waiting for the owners if they take the deal that's there. And you know, if the players can weather the storms that come with each wave of ominous predictions, at some point, the good news might be what saves them.