The Jordan 11 Concords And The Definition Of Insanity

The Jordan 11 "Concords" hit stores at 12:00 a.m. Friday morning, and were met with hysteria at stores all over the country, and websites all over the internet. It's all completely, beautifully insane.

Share All sharing options for: The Jordan 11 Concords And The Definition Of Insanity

You'd have to be a full-fledged sneaker addict to understand the fascination with the Jordan 11 "Concords", and even then it wouldn't really be "understanding" so much as a self-conscious nod of solidarity. For the people who love shoes, explaining or understanding the fascination is beside the point.

The latest Jordan 11 re-release has played out like the golden ticket in Charlie And The Chocolate Factory, but with web servers and eBay and overwhelmed shoe store employees all over the country. Exactly the way it happened 15 years ago, when the shoes first hit the market. I missed out then, and missed out every time since, so the shoe's sort of become my personal holy grail. Over the years I've learned it's like that for a lot of people.

It all began with a lawn mower. Tinker Hatfield is the man who for years masterminded the design side of the Air Jordan shoes, and as he explained to Complex Magazine back in 2008, "It was a push mower but it was designed beautifully and it really provided some of the inspiration for the Jordan XI because the lawn mower has to be really rugged."

Note: This is your garden variety designer babbling. Designers LOVE talking about inspiration like this. Like one of them will say, "Oh yeah, you see the way sole of the shoe curves inward like that?" And another will chime, "Well that detail was actually inspired by the combination of a 747 and a Lotus flower that we saw in Thailand." HOW MAGICAL.

Except that the Jordan 11s are the one shoe that really did feel magical when it hit the park. Part of that's Hatfield's own talent, but it's also about Michael Jordan. There's never been an athlete so magnetic, and he lent a mystique to shoes that we'd never seen before or since.

In 1995 he was at the height of his powers. He'd just left the NBA for a year and a half, leaving the whole world begging for more, and then sending the world into ecstasy when finally decided to come back. And as we all became entranced by the Jordan mystique again, he was out there wearing these that futuristic-looking patent leather wrapped around the bottom of his shoe. If there'd been any doubt that he was the coolest athlete on earth, his shoes ended that debate.

As Hatfield told Complex, "I finally came across this higher quality patent leather that actually was not only shiny, but was also tough, scratch resistant and it would flex without cracking. It reminded me of that lawn mower, how the bottom edge of that lawn mower was really tough and designed to work in the conditions of mowing the lawn. I located [the patent leather] around the whole bottom third of the shoe for all those same reasons."

Jordan was excited as everyone else. "I brought this design back to Michael," Hatfield remembers, "And the first thing he said out of his mouth was 'Yeah, now we’re talking. Now you got it.'"

He wouldn't wait to wear it. "We gave him a pair and said, 'Don’t wear these in front of anybody, because they’re not going to come out for like four months,'" Hatfield remembers. "And he goes and wears them in the playoffs. So I’m sitting there watching this whole thing on TV going 'Oh no!' But in the end it was kind of a funny story because we thought, 'Oh shoot, now people are going to be really pissed off because they can’t go out and buy the shoe until next season.'"

Now it's 15 years later and here we are again.

And there I was Friday morning, online at exactly midnight with the holy grail of basketball shoes in my sights, about to checkout, and ... BOOM, suddenly I was at the whims of the spinning wheel of death. Just a gray screen and that stupid, stupid wheel. 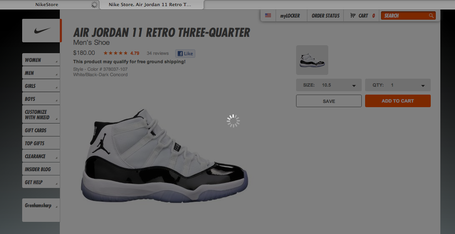 And then a few minutes later, after making it to checkout, there was this, telling me my "session" -- i.e. me re-sending my order every 15 seconds for a solid 20 minutes -- had been voided by "inactivity".

Try to refresh the page, and there's an error message. 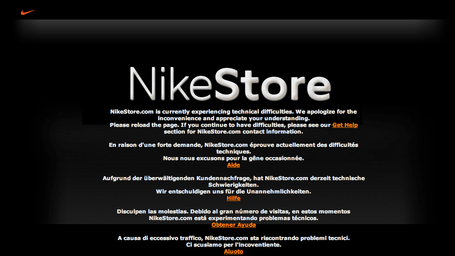 And then a different error message.

From midnight to 1 a.m., I swear to God this happened to me 10 different times. I wanted to hurl my computer across the room and/or strangle a web designer. And Nike handled the rush 10 times better than other sites! Places like Eastbay, FinishLine, and Foot Locker all crashed almost instantly Friday morning, proving what should been obvious going in.

This isn't just a case of a couple thousand sneaker lovers going nuts over a new product. Where the Jordan 11s are concerned, everyone who's ever been a sneakerhead is transported back to the time in their life when they'd wait up all night to get a pair of shoes.

I didn't get mine online, though, and after pulling an all-nighter to finish my NBA preview this week, waiting up all night in the cold just wasn't gonna happen. The best I could do was find a store selling them in the morning, and make it there by 6 a.m. I woke up late and didn't get there till 7:30. The store opened at 9, but I knew going in that I was definitely too late. People had been there since 5 a.m., flanked by three police cars.

At the back of the line, there was a 30-something guy in a jeans and a sweatshirt who'd already been denied at a store earlier Friday, a 60-something man in a sweatsuit who'd struck out online, and then a college kid who'd walked down to try his luck. And me, still in my pajamas.

Doing the same thing over and over again hoping for different results -- this is the definition of insanity. Waiting in the December cold for a shoe that's already sold out, commiserating with strangers about web servers -- this is a secondary, more tangible version of the rule. But we all laughed about it. And still waited becaue, as the college kid said, "It's worth a shot."

Then when a chubby employee came out and screamed across 250 people that the men sizes had sold out, we all nodded, and moved on. Me and the 30-something went to get coffee at Starbucks down the street. He worked there most days but was off today, so the clerk behind the register was surprised to see him. "I'm just down here waiting for shoes," he told his co-worker.

"Oh man," the clerk said. "There were 50 people down there at 5 a.m. All for a pair of basketball shoes. It makes no sense to me." We laughed. The clerk kept going. "Michael Jordan's not even a player anymore! He's an owner!" We both shook our heads.

"Maybe next month I'll wait up all night for the new Ted Leonsis shoes," the clerk said. "The wingtips, man!" We laughed and shook our heads. He didn't get it, but at the same time, he had a point. We knew we were crazy. Or at least I did. But it was worth a shot.

If you're looking to understand the demand in 1995, it comes down to a combination of great design, and even better time. Michael Jordan was on top of the world, and everyone wanted a pair of the shoes they couldn't buy. Because even Michael couldn't resist wearing them too early.

"People pent up demand," Tinker Hatfield said in 2008. "By the time the shoe actually hit the malls and the stores of America, it created frenzy. That was one of the first times that we’ve actually seen these huge lines of people waiting all night long and then breaking into the malls."

Fifteen years later, the reason people still break into malls and wait up all night long isn't any different. Because the design's still like nothing we've ever seen, and it's still something that everybody wants and can't have. The Jordan 11 Concords haven't been in stores for years, and won't be again for a long time. Obviously people will go nuts. There's more, though.

Sneaker design is like the dunk contest. You can add wrinkles and do your best to make magic, but no matter what, it's just about impossible to recapture the magic of the 80s and 90s. We can be impressed, but it's a lot harder to blow our minds the way Michael Jordan once did. And if Jordan the magnetic player has evolved into Jordan the megalomanic owner, then his shoes evoke what we used to love.

So on some level this is all nostalgia. There's no good reason for millions of people to freak out over basketball shoes like a bunch of middle schoolers, but it's nice to have an excuse every once in a while.

My story has a twist, too. After giving up hope and heading home this morning, I checked my e-mail when I walked in the door, and there was an e-mail from Nike. Turns out, halfway through the night one of my 20 different orders had gone through. So just when I'd given up hope for good and remembered that I'm an adult who shouldn't care this much about shoes, I finally got lucky. And like that, I was a 12-year-old kid on Christmas, beaming all over the place.

If you understand where I'm coming from, then hopefully you got the shoes, too. If you don't understand and you think this is all crazy and pathetic, then you're probably right, and hopefully you have some insane, embarrassing obsession of your own. Because whether you love basketball shoes or not, there's something pretty cool about millions of people lining up all over the country and acting like a bunch of 12-year-olds.

Just because it's insane doesn't mean it can't be beautiful. 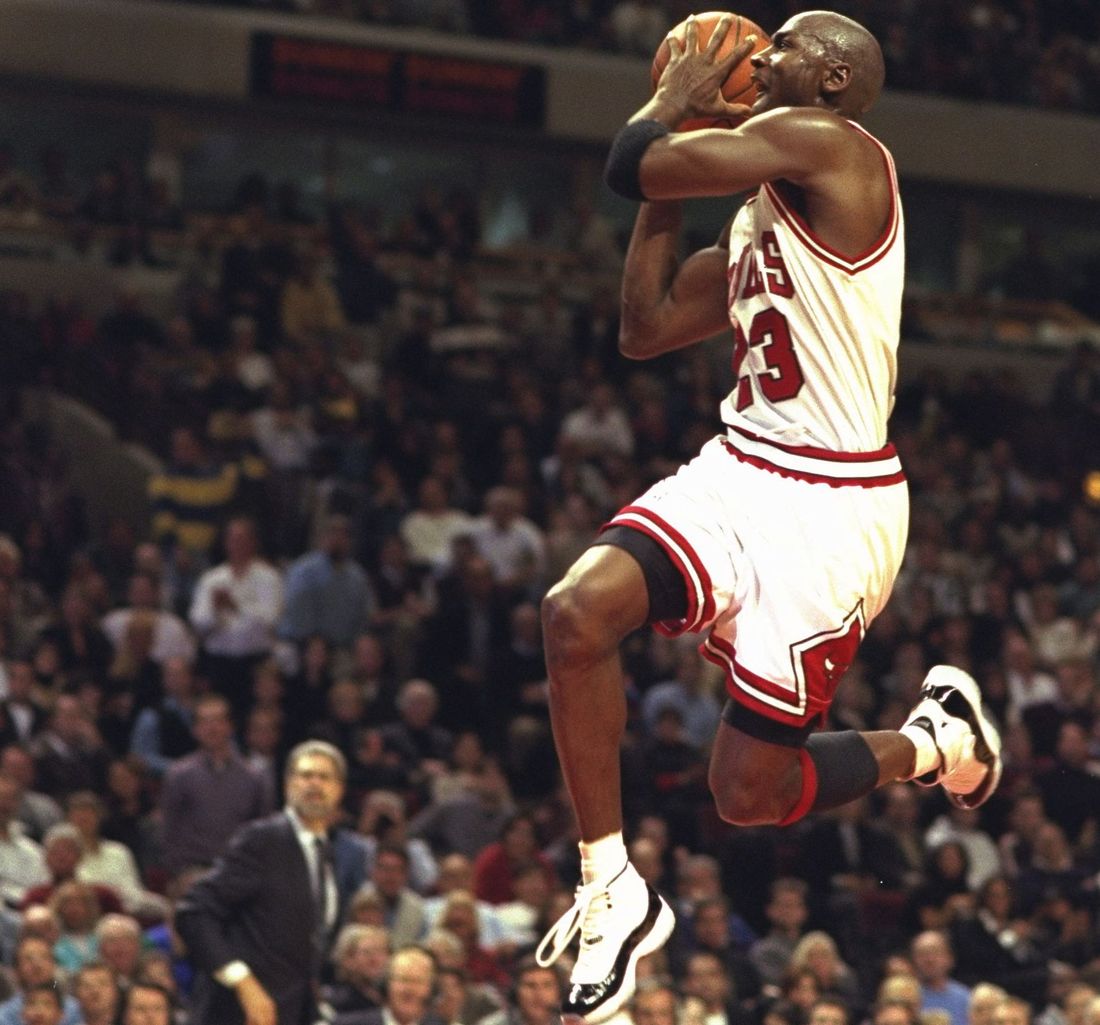