Share All sharing options for: The Orlando Magic CEO Who Drunk-Dialed Dwight Howard 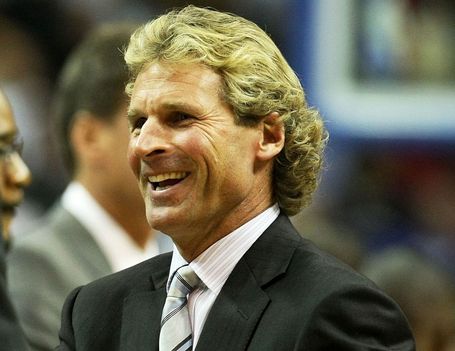 On Tuesday news broke that Orlando Magic CEO Bob Vander Weide (pictured above) will retire effective immediately, with team president Alex Martins replacing him beginning this week. That's the What. But the Why is much better. Via David Baumann in Orlando:

Solid sources have confirmed Vander Weide made a 1 a.m. phone call Tuesday morning to Magic superstar Dwight Howard, and Howard thought Vander Weide may have been intoxicated. On that call, Vander Weide told Howard how much the Magic want to keep him in Orlando.

If it's true, this has got to be considered the lowpoint of the NBA's new "superteam" era and all its wrought in small markets... I mean Dan Gilbert scribbling out that hateful letter to LeBron was bad, but nothing's more sad than a CEO getting drunk and pouring his heart out to a 25 year-old NBA player at 1 a.m. Imagine being Dwight Howard in that situation:

"Have you been drinking? How 'bout we just talk about this in the morning?"

"You're special, man. I care about you too."

"Okay, so let's just talk about this in the morning..."

If there's any reason in the entire world to be glad that TMZ Sports, MediaBistro, and World Star Hip Hop exist, it's that one of those sites might find a way to make this phone call public. Or maybe it was just a drunk voicemail. Either way, really. The fans needs to know.

You can read more about Vander Weide in this 2008 profile from the Orlando Sentinel, and seriously, if the stress of losing Dwight Howard is what's behind his resignation after almost 20 years as CEO, then this is pretty sad for everyone involved. As SBN's Kevin McCauley point, Vander Weide was basically acting out the narrative in that awful new Drake song, Marvin's Room. As if we needed any more proof that Drake is ruining the world...