How The Boston Celtics Get Ray Allen Open Looks

Ray Allen will soon become the most prolific three-point shooter in NBA history. How do the Celtics work to get him open? Sebastian Pruiti digs in.

Share All sharing options for: How The Boston Celtics Get Ray Allen Open Looks

As Ray Allen approaches Reggie Miller's all-time record for three-pointers made, it's safe to say that Allen is one of the best, if not the best, shooters in the history of the NBA.  Because he is such a great shooter, it is safe to say that defense tend to pay attention to him when he is on the court.  This is why I think Doc Rivers is one of the best coaches in the game.  Time after time, Rivers is able to create open looks for Allen out of halfcourt sets.

In fact, according to Synergy Sports Technology, 52.5 percent of Ray Allen's 284 catch-and-shoot jumpers are considered unguarded.  That is absolutely mindboggling.  Sure, some of that has to do with the talent around him, but a lot of it is the Celtics' coaching staff and their creativity in the halfcourt.

Part of what makes Allen so hard to defend is the fact that he is so good at reading the defense as he comes off of the screen.  This is part of the reason why the Celtics have Allen come off of screens so much -- they can trust that he will make the correct read more times than not.

One of the off-screen plays that the Celtics use the most is a double screen on one side with a single on the other, giving Allen the opportunity choose which screen he wants to use: 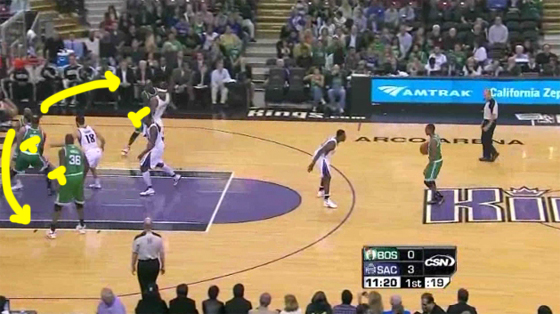 With Rajon Rondo bringing up the basketball, Ray Allen gets himself underneath the rim as the rest of the team gets in position.  Paul Pierce and Shaquille O'Neal set up to set screens on one side of the court and Kevin Garnett sets up on the other side. 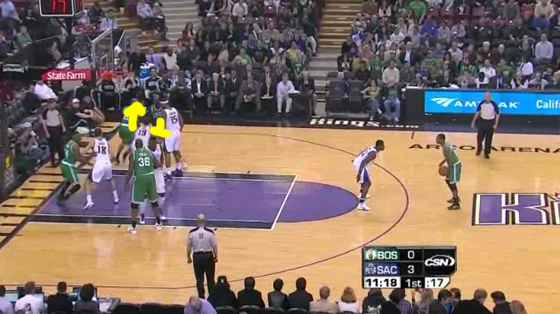 Allen chooses a side and flashes to the corner, using the screen and spotting up behind the three-point line.  Garnett sets a solid screen and Rajon Rondo delivers the basketball on time. 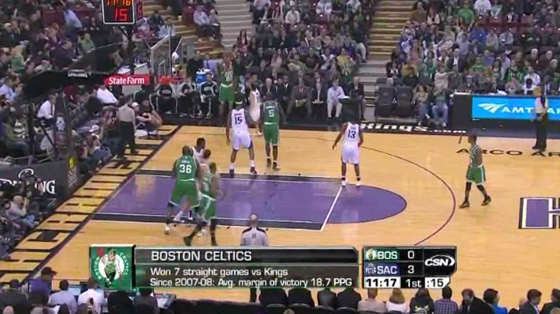 Once Allen makes the catch, his fast release comes into play.  Ray Allen is able to catch the ball and get off a good shot faster than anyone I have ever seen.  This is why using Allen off of screens is so effective.  All the screeners need to do is get a piece of Allen, and it means he is going to get a shot off.

What makes this so hard to defend is that only Ray Allen knows which direction he is going in.  This means that the defender is reacting to Allen, and usually by the time he does, it is too late.

Even when Allen does pick a side, it doesn't mean he has to commit to that side.  Allen is so good off the ball that he can start one direction, curl around and use the screen on the other side.  That is exactly what happens here, and Allen's skill off of the basketball is what creates the open look.

Another play that results in a Ray Allen look off of a screen is a screen the screener set with the action taking place off of the basketball: 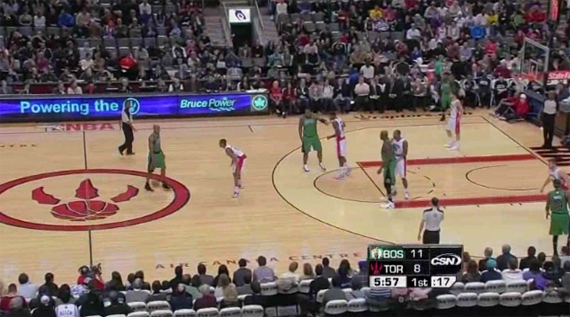 The play starts with Ray Allen as the ball handler bringing up the basketball with two bigs setting up on the elbow and the two wing players setting up in the corner.  Allen chooses an elbow to enter the basketball to, in this case, it is Glen Davis. 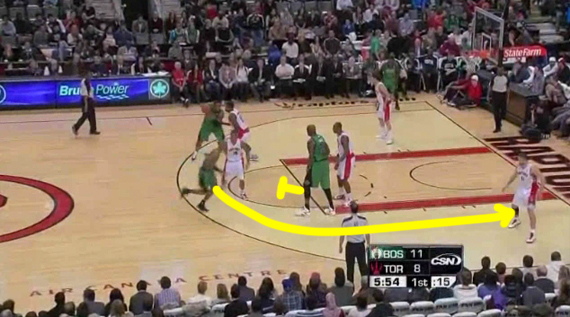 After entering the basketball, Allen then uses a backscreen from the big at the opposite elbow, in this case, it is Shaquille O'Neal. 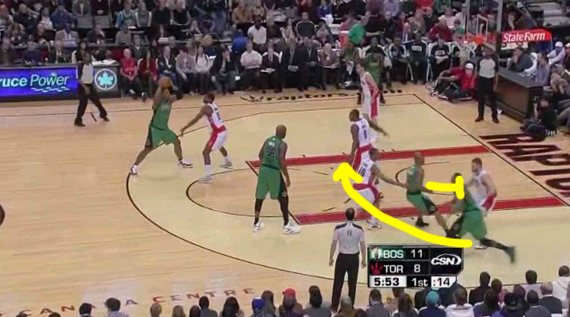 After coming off of O'Neal's backscreen, Allen then sets a screen for Paul Pierce, who shoots the gap and cuts through the middle. 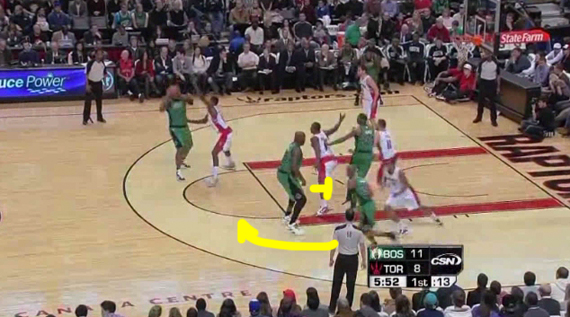 Once Pierce uses Allen's screen, Allen then turns around and gets a pindown screen from the big who set him the baskscreen. 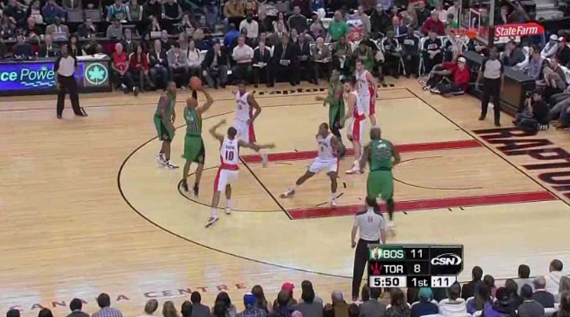 Allen curls off of the pindown screen, getting the pass and the pulling up for the shot at the elbow.  Here is the play in real time:

The beauty of this play is that it forces the defense (especially the man covering the big who sets the back/pindown screens) to decide what screen to help on.  In this case, the defender shows in the middle to defend Pierce's flash to the middle, giving up the Allen curl.

Another reason why this set is so tough to defend is because it isn't just run when Ray Allen is the ball handler (meaning the defense just can't wait until they see Allen bringing up the basketball and sit on the play being run), there is a variation of this play with Allen working off of the ball the entire time:

Here, Allen waits until Nate Robinson gets to a specific spot on the court before getting into the screen the screener action. The fact that the Celtics can run this set out of two different looks (one with Allen bringing the ball up and one with Allen not having the ball) makes this play so difficult to read, and in turn defend.

In my opinion, the spot-up game is the one area where playing with three other all-stars really benefits Ray Allen.  There is so much talent on the court, that as ridiculous as it sounds, the defense can't focus all of their attention on Allen.  In fact, there are going to be situations where the defense has to leave Allen to go help on Pierce, Rondo or Garnett.  But even when Allen is working off of his teammates, his ability to read the situation and figure out exactly where he needs to be on the court really shines through: 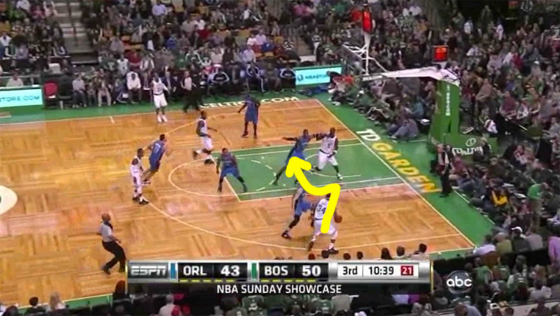 Here, Paul Pierce makes the catch and when he does, he immediately starts to attack the basket, first going baseline and then changing directions to attack towards the middle. 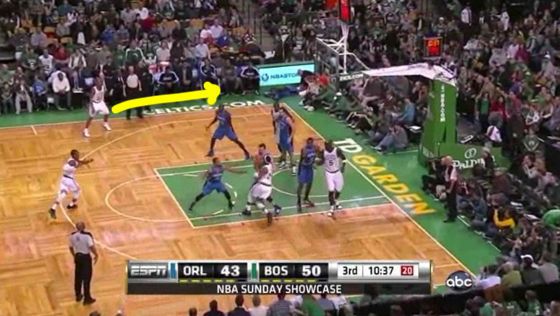 Once Pierce gets into the paint, all five Magic defenders have their eyes on him.  Over on the wing, Ray Allen is open, however, he knows that Jason Richardson knows exactly where he is, making it easy for him to rotate over to him.  So instead of just standing there, Allen slides all of the way to the corner. 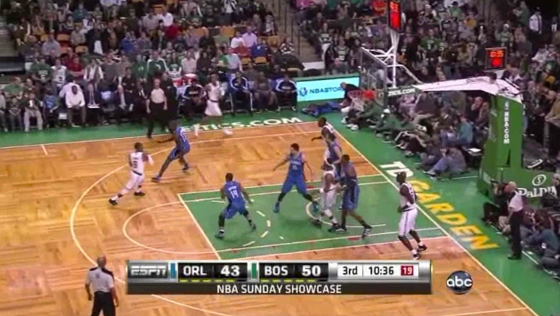 So when the ball gets kicked out to Rajon Rondo, Jason Richardson tries to rotate back to Allen on the wing.  The problem is that Allen isn't on the wing, he's in the corner. 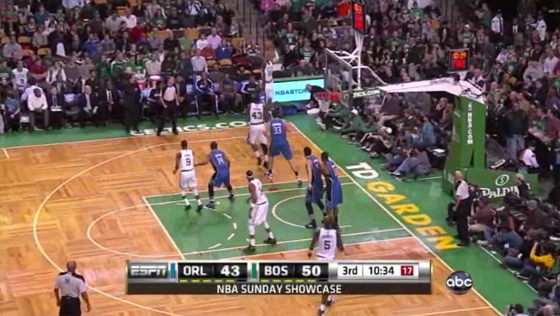 Rondo hits Allen with a nice pass and Allen is able to use his quick release to get off a clean shot.  Here is the play in real time:

To be able to do something like this, you have to be thinking three or four steps ahead.  It seems like Allen is always thinking this way on the offensive end.

Here is another example of Allen's teammates getting him an open look.  On this play, the Bulls are trying to play a zone, but the Celtics counter with Pierce, Rondo and Allen all setting up on the same side of the basketball court.  The Bulls have to try and defend these three Celtics with two defenders.  Eventually, Derrick Rose is stuck trying to defend Rondo and Allen.  Eventually Rose chooses to pick up Rondo since he is attacking the basket.  As soon as Rose commits, Rondo kicks it out to Allen for the wide open three.

The third and final way that the Celtics free up Ray Allen is the one you hear aboutthe least.  It is Ray Allen in the pick-and-roll game as the ballhandler.  When getting a screen set for him with the basketball, Allen almost always uses the screen (93.1 percent of the time, to be exact), and he is usually going to be taking a jumper off of the dribble (70 percent of the time).  Allen has a couple different screening partners but out of the two used more often (Kendrick Perkins and Kevin Garnett), Allen seems to be much more effective coming off of screens set by Garnett.  This is because Garnett is so dangerous when he is playing pick-and-pop that you can't really leave Garnett to hedge on Allen coming off of the screen:

Here Allen comes off of a Garnett screen, and as he does, you see Dirk Nowitzki (Garnett's defender) sink in and get in position to defend Garnett's roll.  This leaves Ray Allen wide open at the elbow, and he is able to knock the jumper down.

In this clip, Allen comes off of the screen and Dwight Howard looks like he is going to hedge hard, but at the last second decides against it, as if he remembered that he needs to watch Garnett on the pick-and-pop.  Again, Ray Allen is open and he isn't going to miss from there.

Since he is Ray Allen, eventually there are going to be teams who try and stop this pick-and-roll by hedging hard on Allen, leaving Kevin Garnett open.  That is a problem because Allen is a good enough passer to make the defense pay:

Here, Nene decides to try and show hard on the screen and trap Allen in the corner.  Allen keeps his composure and whips a hook pass to Garnett on the wing.  Garnett is so wide open he has time to hesitate, take a dribble and then shoot it without a defender getting in his face.

When looking at Allen and his ability to get open looks, you need to take three things into consideration: his coach, his teammates and his knowledge of the game.  Doc Rivers and the rest of the coaching staff are the ones who come up with the sets that get him open, the skill of his teammates is what prevents defenses from loading up on him, and finally his knowledge of the game is what allows Allen to put himself in position to come away with open looks time after time.