Jerry Sloan Resigns, And For Better Or Worse, Deron Williams Takes The Reins In Utah

Thursday afternoon, Jerry Sloan shocked the basketball world and resigned after 23 years coaching the Utah Jazz. So, what's Sloan's legacy? And what does his departure mean for Deron Williams and the future of the Jazz?

Share All sharing options for: Jerry Sloan Resigns, And For Better Or Worse, Deron Williams Takes The Reins In Utah

Death, (luxury) taxes, and Jerry Sloan coaching the Utah Jazz. For what feels like an eternity, those have been constants in the NBA. He's coached the Jazz for almost my entire life, but now just like that, it's all over.

Think about. For nearly a quarter-century, Jerry Sloan has been coaching the same team, running the same system, and getting the same, generally successful results. That's not just rare in the NBA or in pro sports; that kind of longevity is unheard of just about anywhere in life. As one-man institutions go, Sloan's as rock-solid as any in the history of the NBA. And with him, an NBA team from Salt Like City has become an institution just the same.

Which, when you think about the idea of the Utah Jazz, is kind of amazing. Even the team's name is a total paradox. There's not much Jazz in Utah, you know? In fact, you'd be hard pressed to name an NBA city with less Jazz than Salt Lake City. Likewise, if you were to have a random person look up and down the ledger at every team in the NBA and ask what stands out, he'd probably say something like, "Wait a minute, Utah has a team?"

But of course they do. The Utah Jazz. That's Jerry Sloan's team.

And just like the Jazz have always seemed a little out of place with the rest of NBA cities, so did Sloan's brand of coaching. He wasn't exactly a classic disciplinarian, because we rarely heard about him throwing temper tantrums or berating players that got out of line. But he's never been a player's coach, either. It was always Sloan's way, or nothing at all.

But if anything, his system in Utah sort of dwarfed any personality. We never knew Sloan a real person. He was half-man, half-methodical-approach-to-everything.

So as far as most NBA fans were concerned, his system in Utah was his personality. No frills, unspectacular, but consistently effective. It wasn't Seven Seconds or Less, it was seven screens and years and years of success. And that was Sloan, the coach that never won a Coach of the Year award or an NBA title, but never once feared for his job security.

Every year in Utah, Sloan's philosophy prevailed. It made him a legend with Jazz fans, and for the rest of us, the only thing we knew about Jerry Sloan is that he hadn't really changed in more than 20 years of coaching. This made him something of a relic.

"I don't even have a computer," he said when asked about Twitter this year. "I don't know what you're talking about. ... I'm going to be totally honest. How would you do that?"

But what makes Sloan special is that he wasn't a dinosaur. It's not like the NBA's evolution ever rendered him endangered. Even as the game changed and guys like John Stockton and Karl Malone retired, his Utah teams still won. And every year, Jerry Sloan boasted one of the most disciplined, well-executed offenses in the league.

So over the years, as the success continued and it became clear he wasn't going anywhere, his crustiness eventually became the source of nostalgia amid a profession that doesn't give us much room to get sentimental. Sloan was that crazy old uncle that refuses to admit it's not 1958. We grew to love him for what he is. Except for Deron Williams, apparently. And that's where Thursday's news gets interesting. 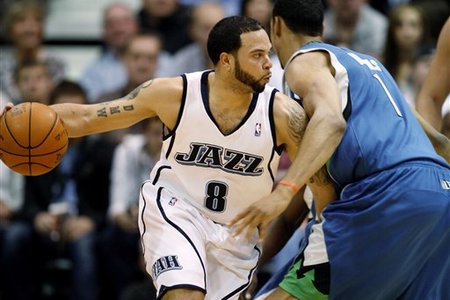 If the rumors are true, and a heated argument between Deron Williams and Coach Sloan is what ultimately pushed Sloan over the edge in Utah, it says more about Williams than Sloan. And it dovetails nicely with the motif of player empowerment that's anchored the NBA in 2010 and beyond.

LeBron left Cleveland for greener pastures, Carmelo's pressured Denver into a season of trade talks, and teams like the Orlando Magic are already worried about the summer of 2012, when Dwight Howard's a free agent. Deron Williams is another part of that equation. Like Howard, he'll be a free agent in 2012, and if he leaves, Utah is back at square one. Like Cleveland and (maybe) Denver or (maybe) Orlando and New Orleans.

So with Williams two years away from a decision that could change the direction of the franchise, for the first time ever, it seems like Sloan was lacking leverage in Utah. Most of this is speculation for now, but look at tweets like this from Brian Smith, the Salt Lake City Tribune beat writer for the Jazz:

Jazz's Williams has been frustrated all season. Made numerous veiled references about Sloan not being willing to change or even listen. (via)

Sources say Sloan had lost team. One described situation as Deron Williams only staying if Sloan stepped down. (via)

Multiple sources say Williams and Sloan have gotten into at least three blowups this season. (via)

We'll probably never know exactly how big a role Deron Williams played in pushing Sloan toward retirement, but those reports paint a pretty clear picture: Deron Williams, the franchise player on the verge of a franchise-altering decision, wasn't happy with Sloan. And now Sloan's gone.

I'm sure Williams wasn't the only unhappy player, but he was certainly the most powerful.

And now that Sloan's gone and the rest of the NBA is slowly coming to terms with the news, Deron Williams' life is about to get more complicated. Fair or not, Utah's fans can connect the dots, and fingers will be pointed in Deron's direction.

To this point, Kobe Bryant told Yahoo! Sports that everyone should take a step back. "People need to leave D-Will the [expletive] alone on this. Leave him alone. He doesn’t deserve to be at the front of this. That’s horse…. He’s a great competitor. He works his butt off. He’s always been a great leader. He’s clutch, performs under pressure. Enjoy the 23 great years that Jerry Sloan gave them, but don’t put this on Deron Williams.”

But even so. He may not have fired Jerry Sloan, but as the basketball world asks how, exactly, Jerry Sloan could ever leave so abruptly after seeming determined to stay forever, the most common answer will be "Deron Williams." And again, we have a case of an NBA superstar's will making him the target of scrutiny that he probably never imagined. It's an NBA theme these days. With LeBron, Carmelo, and now in Utah.

Jerry Sloan outlasted multiple generations of superstars, new defense rules, positional revolutions, and a hundred other watershed moments over the course 20+ years in the NBA. But in the NBA's newest era, the players have more power than ever before. It's not necessarily good or bad, but it's definitely new. And it's arguably what ended a career that seemed like it'd never end.

Now, the Utah Jazz aren't "the team Jerry Sloan coaches." They're "the team Deron Williams plays for." Williams has the freedom he's reportedly wanted all year. But then, he had to force out the most popular person in franchise history to do it. And now, if he leaves in 2012, he'll be the guy that forced out Jerry Sloan and then left Utah with nothing.

It's his franchise now, but the way the takeover happened isn't going to be forgotten. If he leaves, and even if he stays. The same way LeBron underestimated the backlash from fans and Carmelo doesn't understand why Denver fans are booing him, Utah's most popular player just made himself a lot more controversial.

No matter what happens, he's still the guy that might have forced out Jerry Sloan, NBA Icon. Deron Williams is a bonafide superstar and in fighting Sloan's flex offense, he may have had a point. Now he's gotten his way, and Sloan's gone on his way, and only a lot of winning will make fans forget how it happened. Would you want that kind of pressure?