Share All sharing options for: Jerry Sloan's Stability With Utah Jazz Unprecedented In The Erratic NBA

Jerry Sloan, who resigned as the coach of the Utah Jazz on Thursday, was an NBA institution, the rare face of a franchise. When John Stockton retired and Karl Malone left on his (unsuccessful) title hunt, Sloan remained in Salt Lake and kept on winning. The long tenure as the man behind Stockton-to-Malone became something else in the years since. He became Sloan, Eternal Coach Of The Jazz. The Jazz became not the spot where Stockton and Malone reigned, but Sloan's Team. The mystique of Jazz basketball was indeed the mystique of Jerry Sloan -- tough, no-nonsense, fundamental basketball. (Emphasis on the "no-nonsense.")

The stability Sloan experienced itself became part and parcel with the Jazz mystique. Coaches fell left and right, and left and right again. But Sloan remained. Sloan survived losing streaks, and missed expectations, and player blow-ups, and an inability to win it all. Any number of things can knock an NBA head coach off his perch. But none of that touched Sloan ... until this week, at least.

How rare was Sloan's stability? We take a visual look below.

How many coaches have each of the other 29 NBA teams gone through since Sloan's first full season as head coach of the Jazz? We did the research. Click to enlarge. 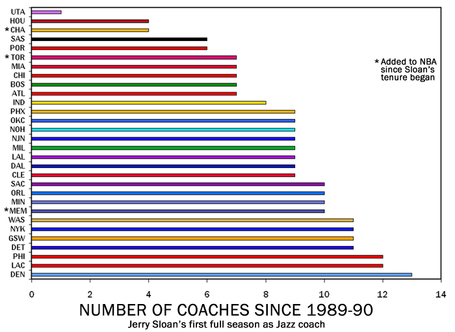 We didn't include interim coaches who only worked a couple games before a more permanent coach was named. However, if an interim worked more than five games, we counted him. We also double-count coaches who have two distinct tenures with the same team (like Don Nelson in Golden State or Cotton Fitzsimmons in Phoenix), with the sole exception of Phil Jackson in L.A., who took a just a year off and didn't coach elsewhere. Note that the Bobcats didn't exist until 2004-05, and the Grizzlies and Raptors entered the league in 1995-96. The 1989-90 season was the premiere campaign for the Magic and Wolves.

Houston and Charlotte have had four different head coaches in Sloan's tenure. The Spurs (with new longest-tenured NBA head coach Gregg Popovich) and Blazers have had six each. Everyone else? A bunch! The Nuggets, Utah's Rocky Mountain rival, has gone through 12 coaches since Sloan took over, and No. 13 (George Karl) has been around a while.

Several of those teams have been decent throughout Sloan's tenure. But none had the stability on the bench that the Jazz did. Credit Sloan for his survival skills and coaching talent, yes. But credit Larry Miller, the Jazz's late owner, for believing Sloan could still do the job once Stockton and Malone left. Apparently, few other NBA owners would have made the same decision.