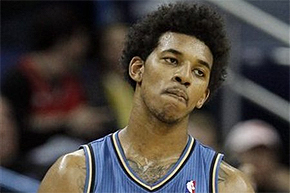 A bit more than a week ago, we unveiled the Black Hole Atlas for NBA guards. Kobe Bryant, as you may expect, came the closest to the titular black hole, owing to a remarkable usage rate combined with a relatively low assist-per-shot figure.

Neil Paine of Basketball-Reference.com has a method to ascertain the number of touches a player has during any given game. He used those figures and estimates of the number of passes to a teammate in an attacking position players make to come up with his own "black hole" ratings.

As it turns out, Kobe passes the ball on an estimated 50 percent of his touches, on the low end among guards who play 30 minutes a game and, as we found in the Atlas, comparable to Dwyane Wade and Kevin Martin among high-usage guards. But the real star of Paine's work: Nick Young.

Paine's numbers indicate that Young passes on 27.4 percent of his touches. The next most Black Hole guard playing at least 30 minutes a game? DeMar DeRozan at 36.1 percent. (Trojans!)

Let's put this in perspective. If Kobe passed the ball as infrequently as Young does while maintaining his frequency of touches per minute, he would take 32 shots per game. That doesn't include foul shots.

For what it's worth, two players have averaged more than 32 shots per game in a season in NBA history. Wilt Chamberlain did it three times (including 39.5 FGAs per game during his 50 ppg season) and Elgin Baylor did it once. Those guys, however, were playing upward of 44 minutes per game. Kobe is playing 34.

So our theoretical Kobe-corrupted-by-Nick-Young would be the greatest Black Hole Machine in theoretical NBA history. Suck on that, Antoine Walker!