Yes, The Golden State Warriors Are Moving In The Right Direction

Share All sharing options for: Yes, The Golden State Warriors Are Moving In The Right Direction

Tim Kawakami of the San Jose Mercury News is a cantankerous, skeptical (and some would say cynical) sort. He loathes PR flacks who push positive press in his face, and is always looking for the next shoe to drop in any storyline. He has been particularly critical of the Golden State Warriors (that is, when he's not getting into spittle exchanges with Oakland Raiders staff).

The Warriors beat the playoff-bound New Orleans Hornets on Tuesday to move to 19-11 at home this season and 25-29 overall. Golden State has gone 16-11 since the week before Christmas. After the latest victory, Warriors fans requested an admission from Kawakami that the team is indeed heading into the right direction. The columnist's response? 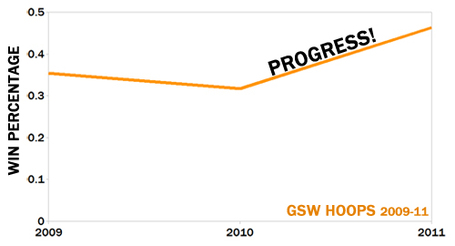 It's not just win percentage, either. The team's scoring margin (-2.7) has improved (-3.6 last season). The team's offense has improved (to No. 11 from No. 14). The team's defense has improved (to No. 27 from No. 29). The Warriors were 18-23 at home last season; they already have 19 home wins with 11 more to go. Maybe these are marginal improvements, but they are improvements. And after decades of quick fixes and rampant failure under Chris Cohan, improvements, however small, matter. This isn't the NFL, where you can clear the books in two years. This isn't MLB, where you can buy a pitching staff if your gate is hefty enough. Progress in the NBA, barring a No. 1 pick in a lucky year or a Heat-like coup, takes time.

The Warriors aren't perfect or even "good." But they are absolutely heading in the right direction. You have to crawl before you can walk. At least the Warriors aren't laying on their face passed out like they were the last two years.