Dirk Nowitzki gets to his favorite spots quite often. How the Mavericks help him get there is devastatingly simple, but nearly impossible to stop. Sebastian Pruiti breaks it down.

It should be no surprise that Dirk Nowitzki is the focal point of the Dallas Mavericks' offense. The sets that the Mavericks run for Nowitzki can be considered simple, but that is by design.  With Nowitzki's height and soft shooting touch, Rick Carlisle doesn't need a ton of razzle dazzle or multi-layered sets that could confuse his players.  He simply needs to get Nowitzki to a spot on the court with space so he can go to work.  That is exactly what this offense does.

According to Synergy Sports Technology, Dirk Nowitzki scores most of his points from three different play types, post-ups, spot-ups, and isolation.  For each of these play types, the Mavericks have a few different sets that they like to run for Nowitzki.

When the Mavericks are posting up Dirk Nowitzki, they like to use both ball screens and off-ball screens to set him up on the block.  There are two different sets that the Mavericks primarily use to get Nowitzki the ball in the post. 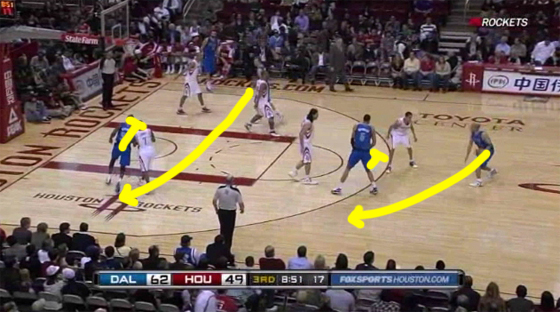 With Jason Kidd bringing up the basketball, Tyson Chandler sets up at the top of the key to set a ball screen for him.  As this happens, DeShawn Stevenson comes across the lane and sets a screen for Nowitzki, allowing him to come across the paint and set up on the ball side block. 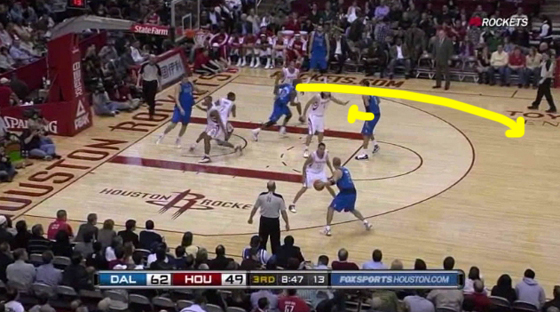 After setting his initial screen, Tyson Chandler gets in position to set another pindown screen at the free throw line for Stevenson.  The purpose of this pindown screen is to both clear space in the paint for Nowitzki and present the defense with another option to defend. 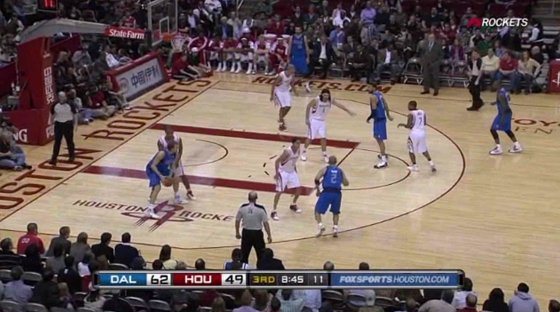 Kidd enters the basketball to Nowitzki and then clears out.  Nowitzki is now working on the block one on one against his defender, allowing him to use his size and shooting ability to his advantage.  Here is the play in real time:

With this set, the goal is simple.  Get the ball to Nowitzki and let him work in the post.  A simple post up doesn't work, because it will give the defense opportunities to double or front the post.  Here, Nowitzki is able to work one on one.

Here is another look at this set.  The cross screen is important because it means that Nowitzki's man isn't leaning against his body, pushing him out of position as he gets the basketball.  Here, Nowitzki gets the ball in great position against Antawn Jamison and he is able to take advantage.

The second set that the Mavericks like to run in the post also involves using Dirk and screens.  However, this time Dirk is setting a screen instead of using one. 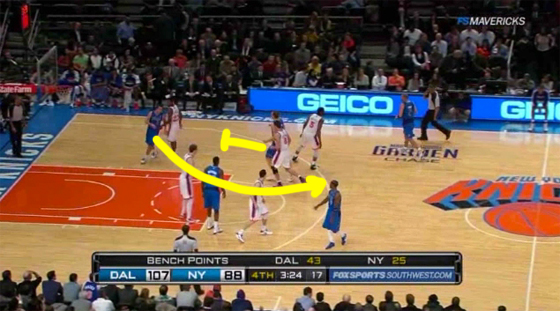 As Jason Kidd brings up the basketball along the side, Dirk Nowitzki sets a downscreen for the two guard, in this case it is J.J. Barea.  Barea uses the screen and flashes to the top of the key. 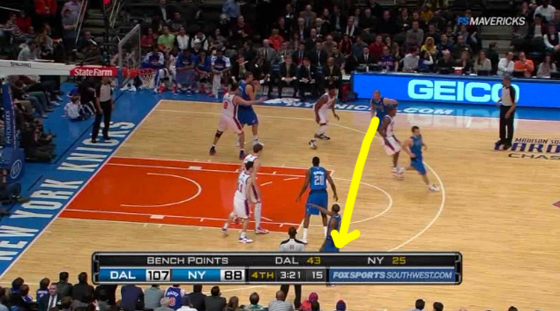 After setting the screen Nowitzki simply turns his back to the basket and posts his man.  Kidd enters the ball to him, and then he cuts to the opposite side of the court, clearing everything out for him. 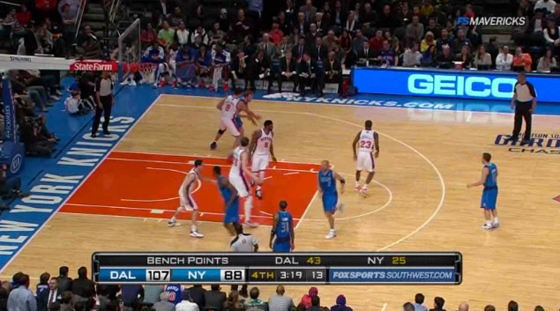 Nowitzki now has the freedom to work in the post without worrying about a double team.  If a double team does come, it is from such a distance where Nowitzki is able to recognize it and make the correct play.  Here is the play in real time:

Watching this play live, you see what all of the space does to the defense.  Toney Douglas clearly wants to double Nowitzki.  However, he is so worried about the distance being to great that he just stands and watches as Dirk hits the turn around jumper.

Here it is again.  Notice how many dribbles Nowitzki is allowed to take as he gets in position in the middle of the lane without a double team coming.  That usually doesn't happen, and it is all thanks to the playcalling and spacing.

Why this works is because the defender in the weakside block is usually the man assigned to provide help defense on dribble penetration like this (because teams don't want to send help from the short corner).  With the defense sinking in, Nowitzki is usually left option to make an easy catch and shoot attempt.  The set that the Mavericks run for Nowitzki uses this basic action: 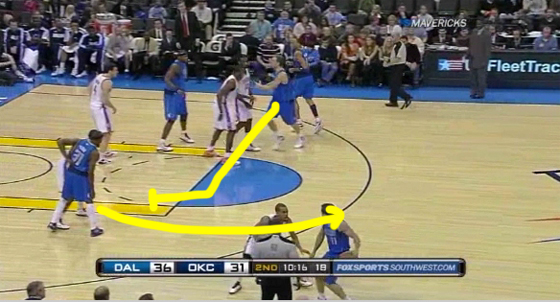 The set starts with Nowitzki setting a downscreen for the shooting guard, in this case Jason Terry, much like he does for the post up set.  Terry comes free at the top of the key and he gets the pass from the point guard. 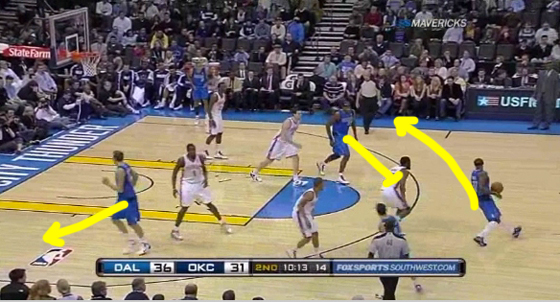 Terry makes the catch and uses a ballscreen from the Mavericks' center.  As this happens, Nowitzki is spotting up in the weakside corner. 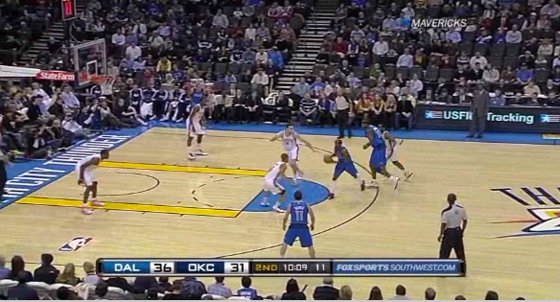 After coming off of the screen, Terry turns the corner and attacks the paint.  The result is all five defenders (including Nowitzki's defender) focusing on the basketball. 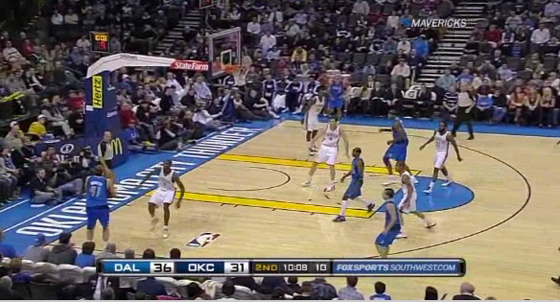 Nowitzki's man sinks too far off of him, creating enough room for Nowitzki to knock down the spot up jumper.  In addition to this, the Mavericks like to mix things up with a dribble handoff:

Here, instead of the shooting guard taking the ball off the screen, the point gets the ball back and uses the screen.  This is a nice little change of pace and its purpose is to put the ball in a playmakers hands (In this case Jason Kidd is now making the pass to Nowitzki in the corner).

Again, here is another look at the dribble handoff.  Who would you rather have make that tough pass to the corner, DeShawn Stevenson or Jason Kidd?

The final play type that the Mavericks like to use with Nowitzki are ISOs.  When getting an ISO, Nowitzki is most dangerous when he gets the ball at the top of the key.  The reason why is because Nowitzki can do so many things from that spot.  He can either pull up for the jumper, drive left, or drive right.  The Mavericks run a simple set using a dribble handoff and a pindown screen to get Nowitzki the ball at the top of the key: 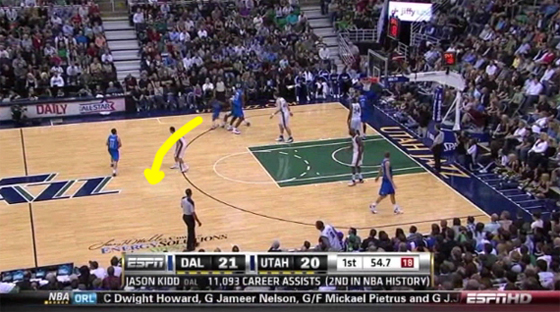 The play starts with the Mavericks' point guard bringing the ball up and getting it to his shooting guard who is coming from the corner to the top of the key. 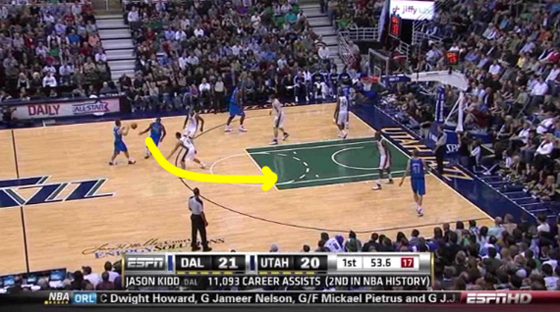 The shooting guard (in this case Jason Terry) has the basketball for a split second has he hands it right back to the point guard.  After he does that, he continues his curl from the corner to the lane. 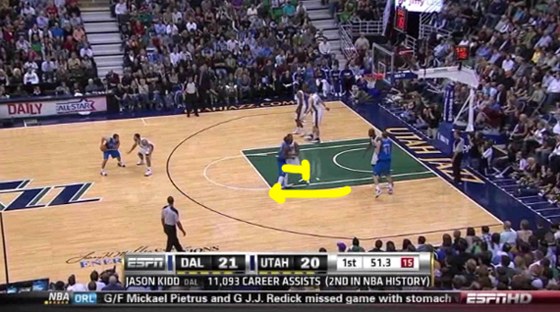 The purpose of Terry setting up in the lane is for him to set a pindown for Nowitzki on the block.  Nowitzki uses the screen and makes it to the top of the key, where he gets the pass. 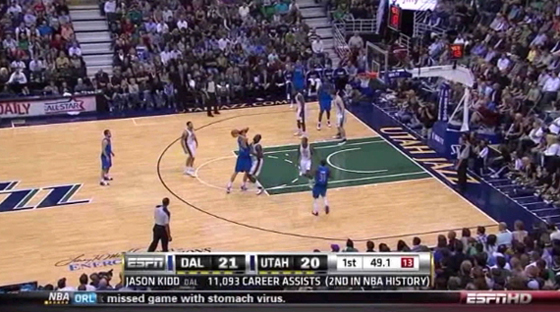 Nowitzki now has the ball at the top of the key (which is his sweet spot) with space to work.  Here is the play in real time:

The purpose of that little screen is to create space between Nowitzki and his defender.  That space is important because it allows prevents Nowitzki's defender from leaning up on him, pushing him out of his spot, or denying the pass.

Here is another look at this set.  That little handoff is important because it does a few different things.  It gets the ball back in the point guard's hands, meaning that he is going to be the one entering the ball into Nowitzki.  Also, it gives the defense something else to focus on instead of Dirk at the top of the key/foul line.

None of these sets are going to be praise or win any awards, but they are so effective.  It can be very easy to overcoach in this position, but I have said it time after time, a coaches job is to put his players in a position to score.  That is what Rick Carlisle is doing here.  He doesn't need to run Dirk off of double screens, send him backdoor for a lob, or anything like that.  He knows that Nowitzki's strength is making the catch, working his man one on one, and then hitting a shot over him.  Carlisle lets him do that by getting him the basketball in a spot where he is comfortable working with enough space to operate.