Share All sharing options for: Craig Sager's Suit Not Actually His Most Uncomfortable Attribute After The NBA Rookie Challenge

We can't talk about Craig Sager without first getting tonight's suit out of the way. By Sager standards, it's rather conservative. 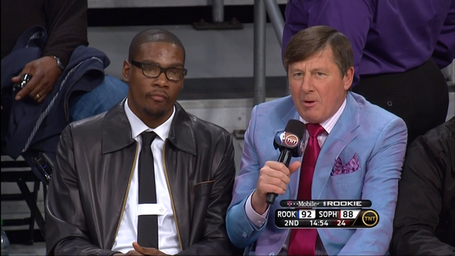 For once, Sager's suit isn't the story. Instead, it's his Jim Gray-esque moment after the NBA All-Star Weekend Rookie Challenge.

John Wall was named the MVP of the Rookie Challenge, thanks in no small part to his 22 assists, including this insane mega-bounce pass to Blake Griffin:

Enter Sager, who was presiding over Wall's MVP presentation. Sager chooses this moment to share his thoughts on the recent DeMarcus Cousins incident, going as far as to say Cousins didn't deserve the MVP with Cousins standing right there. Luckily for everyone, the camera caught not only Cousins' live reaction, but also Wall's:

Ladies and gentlemen, the John Wall "I Cannot Believe Craig Sager Is Talking About This Into A Microphone Right Now" Face: 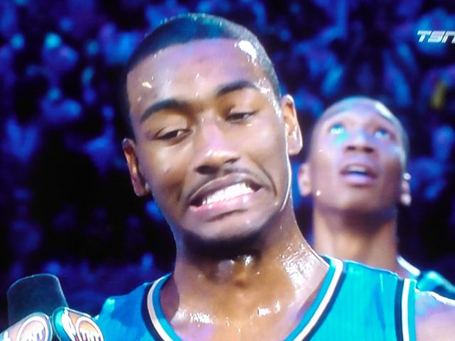 As one Twitter commentator put it this evening, "When Craig Sager turns up murdered later tonight. DeMarcus Cousins did it."