So, How Did Allen Iverson Spend His All-Star Weekend?

Share All sharing options for: So, How Did Allen Iverson Spend His All-Star Weekend?

You can't talk about All-Star Weekend without telling Allen Iverson stories. He perfectly personified the utter insanity of the weekend; nobody played better, partied harder, or brought a bigger, more menacing posse. 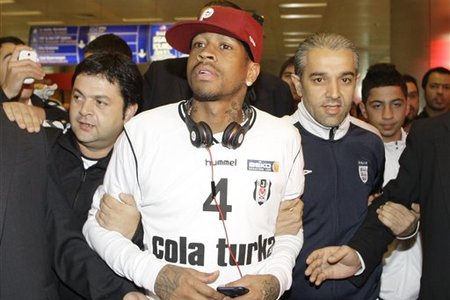 You can remember him however you want, but to me, Iverson's greatest achievement may have the been the '01 All-Star Game in D.C., when he apparently partied for 72 hours, didn't sleep, and then went out and won the All-Star MVP award. That's a LEGEND right there. So... what'd he do ten years later?

Uh, apparently he watched the All-Star game alone at a club called "Wet Willies" in Atlanta.

There's a lesson about moderation and mortality in there somewhere, but... Those should be obvious, so forget it. Legends are more fun than lessons, and as far as legends are concerned, regardless of where he is now, you're not going to find many that were crazier than Allen Iverson.