Do Carmelo Anthony And LeBron James Make You Hate The NBA?

Carmelo's a Knick, Deron Williams is a Net, and after LeBron changed everything, the basketball world has gone crazy. Is the NBA in trouble?

Share All sharing options for: Do Carmelo Anthony And LeBron James Make You Hate The NBA?

Carmelo Anthony made his debut in New York City Wednesday night, Deron Williams is being fitted for Nets jersey as we speak, and LeBron James' effect on the NBA has never been more evident than it is this week. Is that a bad thing? Is the NBA in trouble?

It's been a crazy week so far, and a lot of people have taken the opportunity to sound the alarm and predict an NBA Armageddon. It's all a cause-and-effect, and some people think we've reached a breaking point. After what happened with LeBron and Cleveland, the Nuggets and Jazz weren't willing to take the chance that they could lose their franchise players for nothing. Deron Williams was locked up for the next year-and-a-half, but after watching Carmelo Anthony paint the Nuggets into a corner by refusing a contract extension, the Jazz weren't going to take the chance that Williams might do the same.

In other words, Carmelo threatened to pull a LeBron, so Denver traded him. Then, Utah was worried that Deron might pull a Carmelo, so they traded him. Meanwhile, teams like the Hornets and Magic sit idle during all this, quietly biding their time with their fingers crossed, hoping that Chris Paul and Dwight Howard don't follow in their friends' footsteps.

So, do you hate the NBA? Sorry to be so direct there, but depending on who you listen to, the trade chaos is just proof that the NBA has a crisis on its hands, and we might as well get right to the heart of the issue. 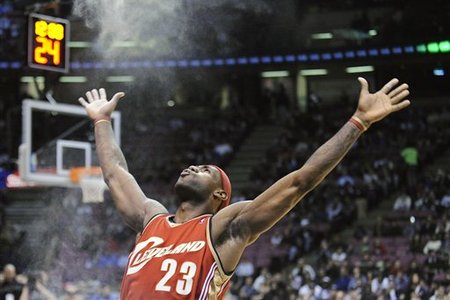 There are two pieces that caught my attention in the past week, and both came from well known writers who did a nice job sounding alarms about the NBA's lost fans, lost ratings, and worst of all, lost integrity. First, there's Rick Reilly at ESPN, a Denver-native who was sickened by the way the Carmelo Anthony spectacle played out over the past few months. Here's a sample:

This is what the NBA has become: very tall, very rich twenty-somethings running the league from the backs of limos, colluding so that the best players gang up on the worst. To hell with the Denvers, the Clevelands, the Torontos. If you aren't a city with a direct flight to Paris, we're leaving.

The grinding unfairness of it all: The NBA used to work on a turn system. You will lose, but if you hang in there, you'll be rewarded with a very high draft pick like an Anthony, and your turn at glory will arrive.

Not anymore. The superstars are in charge now. Now, you lose and you get a pick, and that pick immediately starts texting his pals to see where they'll all wind up in three years. Pretty soon, you're back losing again.

You wonder why the NFL continues to pull away from the NBA in this country? ... The NFL finds a way to let cities that don't happen to have a Versace store hang on to their great players like, oh, say, Peyton Manning.

Essentially, he asks, if 75 percent of the league's teams can't hold onto their stars, then why should 75 percent of the NBA's fans even care? As Reilly might write, The inmates are running the asylum, and with them in charge, the whole operation will go bankrupt faster than a Versace store in Green Bay!

Then there's Buzz Bissinger's argument at The Daily Beast last week, where he argues that the NBA's failing because white fans can't relate to the game anymore. Another excerpt:

I don’t really know what to say about the NBA other than I almost never watch it anymore. ... The game is in trouble and I don’t think there is much dispute about that. Attendance was down last year and is slightly down so far this season. Although basketball is supposed to be a team game, it has become more one-on-one in the NBA than a boxing match. The style has changed and it is a definite turnoff.

White fans want white superstars, or in the case of the NBA, at least one white American superstar. Unless the ghosts of Bird and John Havlicek and Jerry West return to the floor, that isn’t going to happen. And since it isn’t going to happen, the NBA will continue to struggle with an identity crisis that no one wants to publicly acknowledge.

So... He doesn't watch the NBA anymore and doesn't have much to say, but in case you're wondering, he'd like to say that the game is in the trouble, largely because white fans want white superstars, and the days of Larry Bird and Kevin McHale are long gone. 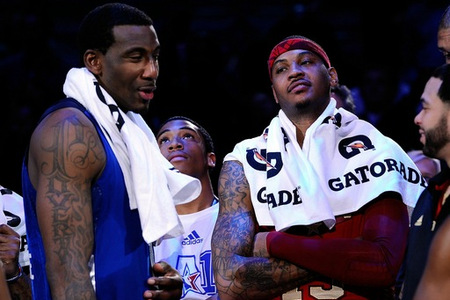 Both perspectives are completely legitimate. Plenty of smart people worry whether the league can survive if superstars continue to ditch small markets for places like Miami and New York City, and likewise, a lot of sports fans have trouble relating to NBA players, quite possibly because they're black.

But before we press the panic button... The NBA's All-Star Game just had its highest TV ratings in history, there's more talent spread across more markets than the league has ever seen, and we're on the brink of maybe the best playoff race we've seen in 20 years.

The NBA's not perfect, but neither is the NFL that both writers hold up as the some gold standard in sports. For instance, while Rick Reilly bemoans the rich twenty-somethings running the NBA from limos, he doesn't mention the bankrupt 50 year-old who shot himself in the chest last week. He was an NFL player ravaged by brain injuries and living without health insurance. Is that what happens when the inmates don't run the asylum?

It's a dramatic example to prove a simple point: there's no such thing as a perfect sport.

Sure, there's a decent chance that a lot of people don't like the NBA after what's happened with Carmelo Anthony and LeBron James over the past year or so. What's harder to believe is that they ever liked it in the first place. Like, Buzz Bissinger thinks the NBA's losing popularity than the NFL because there's no Peyton Manning for white fans to root for. Rick Reilly thinks the NBA's losing popularity because Denver's Peyton Manning (Carmelo Anthony) just forced a trade to New York.

But forget Peyton Manning: Are we sure the NBA's losing popularity?

To people that don't already like basketball, a couple of high profile, controversial stories are easy proof that the game's in trouble. But the cause-and-effect arguments is more like chicken-and-egg logic. LeBron may be losing popularity, and the Nuggets may struggle without Carmelo, but the NBA's doing just fine. Contrary to what Bissinger claims, even without white superstars, ratings are way up this year. And for the people that like the NBA and actually watch the games each week, all of Reilly's "very rich twenty-somethings" have provided an even better subplot to what's probably the healthiest era the NBA has ever seen.

Maybe I'm just clinging to a dying league here. Or maybe I'm mature enough to separate frustration with LeBron or Carmelo from my feelings toward the NBA in general. I don't like either player very much, but I'm pretty psyched to watch the Knicks play the Heat this weekend.

So yes, while baseball struggles to find a competent way to test for steroids and the NFL downplays the dangers of head injuries, the NBA will likely have to find a way to protect smaller markets from losing their big superstars. As problems go, the NBA is doing pretty well, I think.

The league's changing, but for all the claims of crisis, it's not really broken, or even struggling. Did you see the ratings for the All-Star Game last weekend? If Rick Reilly wants to talk about "what the NBA has become" in the year of Carmelo Anthony and LeBron James then he should actually watch a few of the games. It's bigger, better, and more interesting than ever.

And if you're one of the people that hates pro basketball because of "what the NBA has become" in the age of Carmelo and LeBron, then I have to ask: Are you sure ever liked it in the first place?