In this ad that appeared in Sunday's Los Angeles Times, according to Larry Brown Sports, Blake Griffin and Donald Sterling beam for the Los Angeles Clippers' super-duper Black History Month promotion — first 1,000 underprivileged children to bring in the ad get in free with an adult! Everything is great in America, y'all! Celebrate Black History! 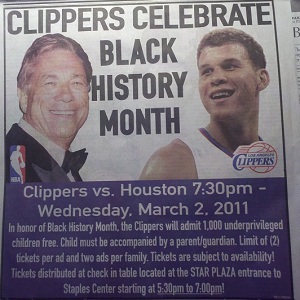 But the ad leaves me frowning.

Sure, there could be a bit of understandable curiosity behind the decision to feature Griffin, who is biracial, in the ad. "Why use a player who is black racially but lightly complected?" is the question cynic might ask. That's easy, though: Griffin's not just the Clippers' most marketable star, he's the reason fans come to games. There's no other Clipper that even approximates his appeal; any player of Griffin's considerable talents would be in that place, no matter his race.

It's Sterling's involvement — and his visibility in the ad suggests he's deeply involved here — that really rankles. After all, when I think of the struggles that black Americans have gone through in securing basic human rights, I think of rich white guys like Sterling who get accused of having a "plantation mentality," refer to athletes' "beautiful black bodies," and get sued by the Department of Justice for housing discrimination. Sterling's the exact sort of person who makes it hard to forget that white Americans enslaved and then subjugated an entire race, and yet here he is, cheesing in a black tie, offering "underprivileged" children tickets to see his team.

Oh, and the fact that the Clippers' Black History Month celebration is taking place in March? That's the sort of thing that calls into question whether Donald Sterling had this planned in advance or just realized at the end of February that his latest chance to patronize an entire race was slipping away.

I can't help but wonder: did Sterling deny housing to any families who will come to this game? Does Sterling actually think associating himself with this promotion was a good idea? Does Sterling think that a one-off, mistimed celebration of Black History Month with free tickets to a midweek Rockets game makes up for what he has allegedly done?

I'm not sure I want to know the answers. But I do hope that I won't be the only one as insulted by what Sterling is trying to do with this promotion as I was by the actions that force him to play PR make-nice games.