Instead of heading out with the team or going to the hotel for the night after the Los Angeles Lakers lost to the Miami Heat on Thursday night, Kobe Bryant stayed late at AmericanAirlines Arena. After the arena cleared, Bryant came back out onto the floor, hoisting up shots well into the night.

Various media members in South Beach spent the night tweeting pictures of Bryant shooting at the arena in a session that lasted for more than an hour. Here's one such shot, from Arash Markazi. 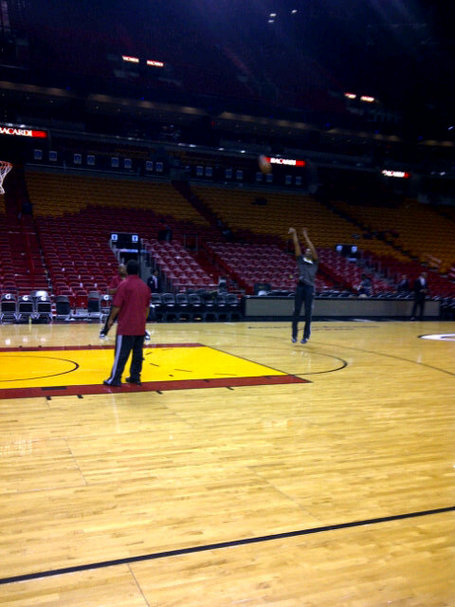 It's normal for a high school players, or even college players, to stay late and put up shots. Even NBA guys will. But a star -- especially of Kobe Bryant's caliber? You don't see that very often. In fact, one security guard at the arena said he'd never seen it in his eight years working in Miami.

Bryant was on the court well into the night taking shot after shot. But is it anything more than relieving stress after a frustrating game? It's not as if he needs the practice or extra shots, no matter how off he may have been against the Heat.

The bottom line is it looks good to come back and practice after a tough loss in the public's eye. The media eats it up, likely praising his work ethic while ignoring his less-than-clutch performance on Thursday.

But a late-night shootaround means next to nothing, even if it is Kobe Bryant.