The Miami Heat beat the L.A. Lakers on Thursday night, but more than anything about Miami, the game gave us a classic lesson in the ongoing study of Kobe Bryant. Competitive? Totally. And the basketball equivalent of a sociopath? You bet!

Share All sharing options for: Never Forget That Kobe Bryant Is Completely Insane

LeBron James, Dwyane Wade and the Miami Heat beat the Lakers on Thursday night to end a five-game losing streak and sweep their season series against the defending champs. But by the end of the night, the story was all about Kobe Bryant.

But before we get to that, the Heat deserve some credit. Everything they didn't do over the past two weeks, they did on Thursday night. Instead of alternating control of the offense, LeBron James and Dwyane Wade found a way to work together. Instead of complaining about his role in the offense afterward, Chris Bosh was aggressive early on, and finished with 24 points and 9 rebounds. And instead of wilting in the final minutes, the Heat came through in a close game, and made plays in the final minutes to get a win against a great team.

'Course, it's one game. After the past two weeks raised about every red flag you could imagine, let's not get carried away and do something crazy here, like hold a celebration and start predicting multiple championships. Not one, not two, not three, not four, not five, not six...

After the past two weeks had everyone doubting everything and turned Miami's predictions into a punchline, Thursday night wasn't proof that Miami will succeed over the long term. But it's proof they can.

But looking at the Heat and Lakers Thursday night, for once, it's hard to come away talking about Miami. I mean, come on. How could anyone focus on the Heat when the most successful player of this generation is so obviously insane? That's not even a criticism; isn't it sort of a fact at this point?

After taking two wild three pointers and turning the ball over twice in the final two minutes, Kobe told the media that Dwyane Wade "fouled the s**t out of me" and then spent over an hour working on jumpers in an empty American Airlines Arena while reporters looked on. So... Pretty much the most stereotypical Kobe Bryant performance you could imagine. 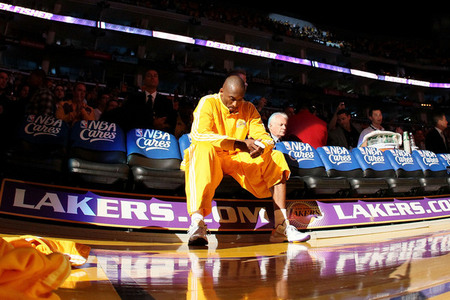 Okay, so that last one was a cheap shot, but still. Hard to ignore the parallels, isn't it? At least as a basketball player, Kobe Bryant's as close as we've got to a real, live basketball sociopath!

It's really not a criticism, though. As his career's unfolded and we've gotten used to it, and Kobe's bizarre persona has become part of his charm. And for the record, the only player that's ever personified those sociopathic traits better than Kobe is Michael Jordan, himself.

As is often the case with greatness, what makes him unstable is also what makes him great. And it also makes him a great character for fans and sportswriters mourning the death of competition. As Kobe said when someone in the Lakers' media pool asked him about playing with a bulls-eye on his back, "I don’t know, I’m still trying to kill people." 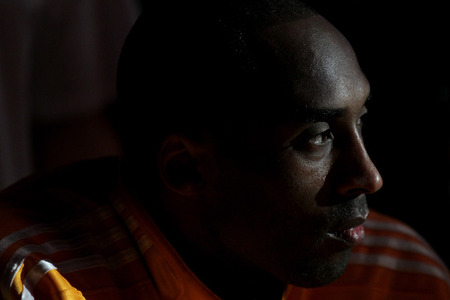 He's a traditionalist's wet dream. The stories pretty much write themselves here. While the Heat literally cry and complain after a tough loss, Kobe Bryant gets right back in the gym.

As Yahoo! Sports' Adrian Wojnarowski gushed on Twitter Thursday night, "Yes, Kobe has a soaked t-shirt shooting his way through a workout in American Airlines Arena right now. Miami ballboys shagging shots. Arena security guy on Kobe: 'I've been here 8 years and never seen this before.' ... They keep looking at each other, as if to say: He won't leave."

That's the same reporter that Kobe confided in earlier this year, telling him that Michael Jackson--not Jordan--was the person he considered a mentor as he evolved as a performer in Southern California:

"It sounds weird, I guess, but it’s true: I was really mentored by the preparation of Michael Jackson. We would always talk about how he prepared to make his music, how he prepared for concerts," Bryant said. "He would teach me what he did: How to make a ‘Thriller’ album, a ‘Bad’ album, all the details that went into it. It was all the validation that I needed – to know that I had to focus on my craft and never waver. Because what he did – and how he did it – was psychotic. He helped me get to a level where I was able to win three titles playing with Shaq because of my preparation, my study. And it’s only all grown."

Jesus, Kobe. Are you serious?

I'm not incredulous because it's weird for a basketball player to seek out the most bizarre celebrity in the past quarter-century as his mentor (um... it is), but because it's so classic Kobe that the Michael Jackson stuff is almost too perfect. Like, he's laying it on THICK there. "It sounds weird, I guess." ... Really, Kobe? You think it sounds weird that your guiding influence in basketball was an accused child molester and confirmed recluse who changed races halfway through his life and battled a fierce addiction to prescription drugs? That's not weird at all!

I wrote about this last year, too, after he opened up to GQ about his close friend Hilary Swank, how he sleeps two-hours-a-night, studies everyone from da Vinci to Daniel Day-Lewis, and how everyone tries to explain him. It's all Kobe's ever wanted; to be loved, feared, and impossibly mysterious to everyone.

And he's gotten his wish lately. After a game where he pretty much single-handedly sunk the Lakers, more than half the stories will be about his pathological dedication to getting better.

"It’s my job," Kobe said of his late-night shooting binge. "You’ve got to work at it."

Which... Okay, cool. Good for him. But let's not forget A) Kobe sabotaging the Lakers down the stretch Thursday night and B) that Kobe's absolutely competitive enough to spend an hour shooting in front of reporters afterward just to take back the attention he lost to the Heat a few hours earlier. Do you think it's a coincidence that we're talking about Kobe and not D-Wade today? 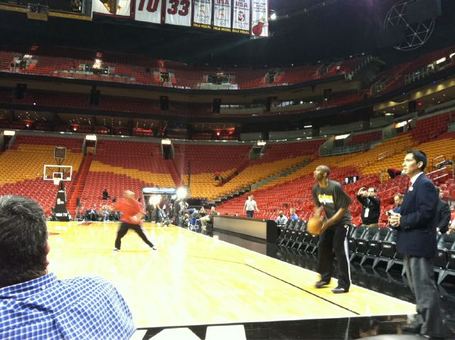 I love him, of course. Kobe's an absolute assassin, even if that means he shares the traits of a serial killer. But if anybody's going to talk about Thursday Night being a testament to Kobe's character as a basketball player, then let's make sure we get the story right.

Whether it was the fallaway three with a hand in his face coming out of a Lakers timeout, the inexplicable 30-foot three about 30 seconds later, or the post-game shooting exhibition for an awestruck group of reporters, Thursday was definitely a testament to the Kobe I've grown to love over the the years--the Kobe on the court that absolutely doesn't care, and the Kobe off the court that cares so much about his perception, it's hilarious.

I love him because he's an original character that we'll all remember long after he's gone. But lest we fetishize over Kobe for all the wrong reasons, let's not forget; we'll remember his competitiveness, maybe, and all his winning, probably, but most of all, Kobe Bryant is the most memorable weirdo we've seen in a long, long time, and Thursday was just more proof. 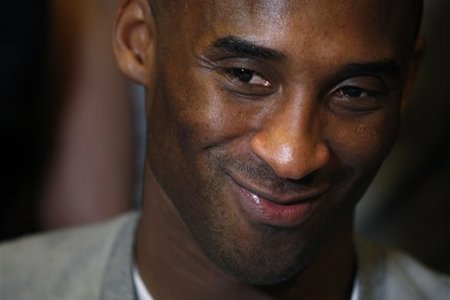