The MVP race has been dominated by Chicago Bulls point guard Derrick Rose, but as good as he's been this year, Dwight Howard and Dirk Nowitzki are both more deserving.

There is still a month and a half left in the NBA regular season, but I'll go out on a limb and say that Chicago's Derrick Rose will win the 2011 NBA MVP. There's too much juice for his candidacy at this point, and this is how these things tend to work. At some point, the idea was advocated, somewhat rationally, by someone, and it kind of just took hold as the Bulls continued to have success, even to the point where opposition gets silenced.

I think I've personally made it pretty clear here or on Twitter that Rose is not my pick for MVP. But of course, that leads to the natural question: if not Rose, then who? When I think about an answer to this question, I keep coming back to two guys who are not getting very much national attention for the award. Those two players? Dwight Howard of the Magic and Dirk Nowitzki of the Mavericks.

Howard probably won't win the award because his Magic team is playing so inconsistently, and because of all the 2012 rumors. Whereas the Bulls are doing better than people expect, the Magic are doing worse, and a midseason trade has not helped (so far). But none of these things are Howard's fault. Howard has made a quantum leap offensively, and he's still the league's best defensive player, so much so that Orlando is surrendering 1.5 points fewer per 100 possessions than last year, despite surrounding him with four non-defenders and no interior depth.

Howard has fixed the one nitpick many had with his game for years: his inability to dominate offensively. In the past, the argument was that teams could neutralize Howard because he lacked good post moves. Not only could defenders force weak shots from him, but more fundamentally, they would prevent the shots from going up altogether, whether by forcing turnovers or making Howard kick it back out.

In response, Howard spent all summer improving his post game, getting lots of press for his work with Hakeem Olajuwon. It's worked, tremendously. Howard has managed to pull off the double whammy of getting up more shots while also cutting down on his turnovers. His usage rate, which measures the percentage of possessions a player ends himself with a shot attempt, turnover or free throw, has risen from 23.9 percent (pretty low for a featured player) to 27.7 percent. In the process, his turnover rate has fallen from 18.7 percent (way too high) to 15.3 percent (much better). In other words, he is getting far more shots up at the basket. His true shooting percentage has taken a small dip (61.7 percent compared to 63 percent), but that's pretty negligible considering the major jump in usage. Because he now has more post moves, he's able to get more shots up at the basket and be more of an offensive threat.

Howard is also balling recently. In 11 games in February, he averaged 26.6 points, 14.8 rebounds and two blocks a game, shooting a staggering 67 percent from the field. In Tuesday night's win over the Knicks, he was even better than that, posting 30 points, 16 rebounds and five blocks. Jameer Nelson hit the big shots late, but it was Howard who kept the Magic within striking distance to set the stage for Nelson.

And yet, Howard will likely lose the MVP chase because his teammates got old, his general manager made a big trade that hasn't paid off and his X-factor teammate that was supposed to provide a spark (Gilbert Arenas) instead has no knees.

As for Nowitzki, the issue with him is that his minutes are down and the narrative of his team's season has focused elsewhere. Nowitzki has missed nine games already, and overall, he's playing fewer minutes per game than any year beside his rookie season. Commentators have also attributed the Mavericks' somewhat surprising success (44-16 this year) to the addition of Tyson Chandler, who has supposedly upgraded their defense. He has, but not nearly as significantly as many think (Dallas was 12th in the league in defensive efficiency last year; they're 12th again this year). If anything, Dirk has become more valuable this season, even with Chandler aboard. Dallas is 42-9 with him in the lineup, and just 2-7 without him.

In and of itself, that's not a significant stat, but Nowitzi is also quietly having the best shooting season of his career. His true shooting percentage is 62 percent, which, for comparison's sake, is higher than Howard's despite Howard getting nearly all his points on shots in the paint. His shooting percentage from every spot on the floor except at the rim -- inside of 10 feet, 10-15 feet, 16-23 feet and from three-point range -- is the highest of his career since HoopData began tracking those stats five years ago. Most remarkably, as SB Nation's Mavericks blogger Bryan Gutierrez pointed out to me, Nowitzki is the only player in the NBA that ranks in the top 20 in field goal percentage (12th), three-point percentage (16th) and free-throw percentage (11th). All this has come for a team that suffered a huge injury early in the season (Caron Butler) and did nothing to improve itself at the trade deadline when practically every other team did.

This isn't to take anything away from Rose, who also has truly had an outstanding season. He's improved his range to the point where he's at least a credible threat from three-point range. In his most underrated development, he's become a much better finisher around the rim, foregoing many of the spectacular attempts that missed in the past for good ol' fashioned hard drives to draw fouls. Most fundamentally, he'd held together a Bulls team that has played most of the year without either Carlos Boozer or Joakim Noah.

But to singularly credit Rose for the Bulls' play is misleading. Coach Tom Thibodeau deserves nearly as much credit for instilling a mindset that has led to the Bulls being the league's best defensive team, despite the presence of Boozer and his poor defense. Luol Deng, the team's starting small forward, has quietly had his best season, working hard to develop a three-point shot all summer and sopping up tons of minutes reliably. Management deserves credit for putting together a really deep roster that collectively provides all the roles a good team needs. Kyle Korver, Ronnie Brewer, Kurt Thomas, Omer Asik and even Keith Bogans  are all offseason acquisitions that have made good contributions, especially defensively, and combined with second-year forward Taj Gibson, they give the Bulls one of the deepest supporting casts in the league. Rose's improvement has been huge, but it's not the only thing the Bulls have going for them.

There's also the fact that Rose, despite all his strengths, is still relatively inefficient as an offensive player. Rose's true shooting percentage (combining free throws and threes) is just 54 percent, which is barely above the league average. Granted, Rose shoots a lot because of the team around him, so his efficiency can suffer because of sheer volume. But consider the similarities between Rose and another young point guard whose name is nowhere near the MVP chase. (Numbers via HoopData: click to enlarge)

Player A is Rose. Player B? Russell Westbrook of the Oklahoma City Thunder. Rose is a little better, but it's still pretty close. I'm not sure the small difference between Rose and Westbrook is enough to hand Rose the MVP award, not when Howard and Nowitzki are doing as well as they are.

In the end, my MVP ballot as of right now probably has Howard first, LeBron James second, Nowitzki third and Rose fourth. It's close either way, so if Rose ends up winning MVP, I won't object too much. But ultimately, I can't help but think that, as of right now, Howard and Nowitzki are more deserving.

Screenshots of the Week 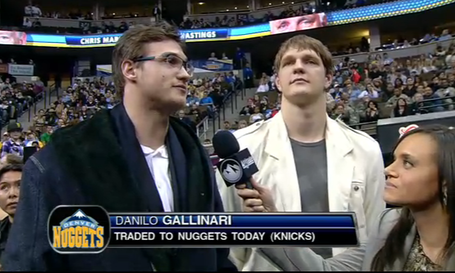 Danilo Gallinari's attire for his first television interview as a member of the Nuggets is glorious. Also, Timofey Mozgov as a space cadet is fitting. 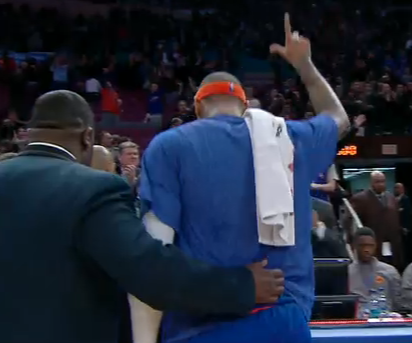 Carmelo Anthony waives to the Knicks crowd after his first game at Madison Square Garden. L for love? 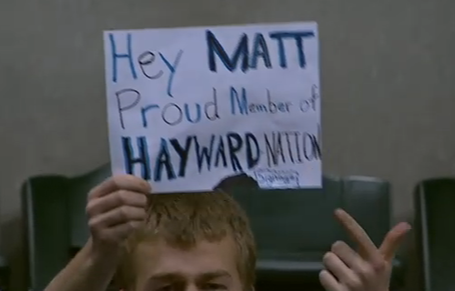 Gordon Hayward made his return to Indiana for the first time on Friday, and apparently they cared a little about him. 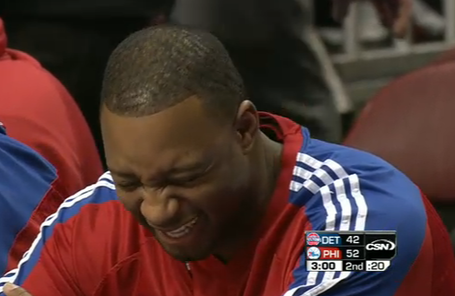 This is Tracy McGrady laughing as coach John Kuester got ejected from a game on Friday. This story has been covered extensively here. 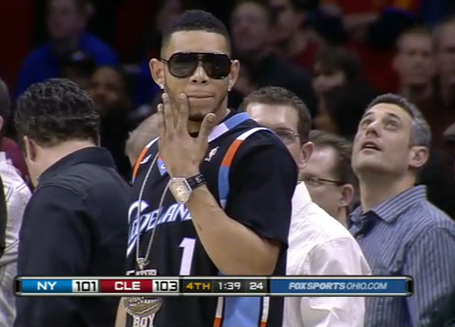 God bless you, Joe Haden. It's one thing to get decked out like that for a good team. It's another to do it for the Cleveland Cavaliers. 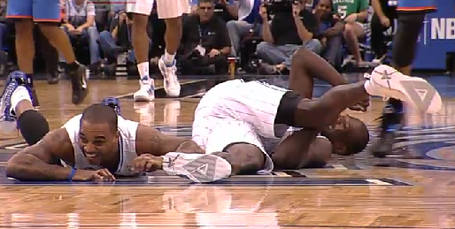 Jameer Nelson and Jason Richardson slid into each other on the ground late in their Friday win over the Thunder. If you didn't know that, though, how else would you explain what is going on in this picture? 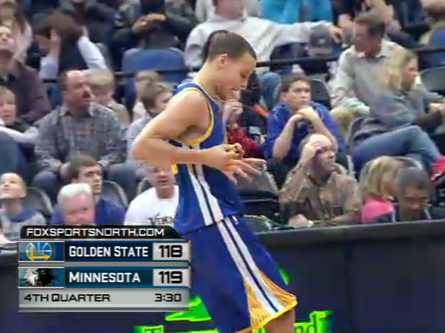 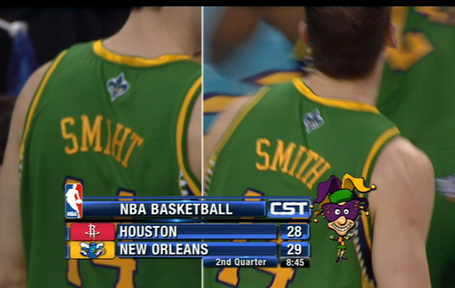 This is the second jersey malfunction of the week. The other one was Andray Baltche. 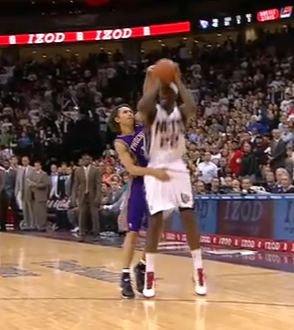 Steve Nash was trying to foul Anthony Morrow on purpose at the end of Monday's 104-103 Suns win over the Nets. He probably could have chosen a better spot to do it.