Share All sharing options for: Blood, Sweat & Tears: The Celtics And Knicks Story

Monday night's comeback win by Boston over New York is the latest in a long line of classic games between these two rivals that deserves to be honored through song. If any one musical act is going to sing that song, might I suggest a little BS&T? Or would that be a little too on the nose?

I mean, you had the blood. Both Ray Allen and Carmelo Anthony spilled enough to require stitches. Seven for Ray and five for Melo. 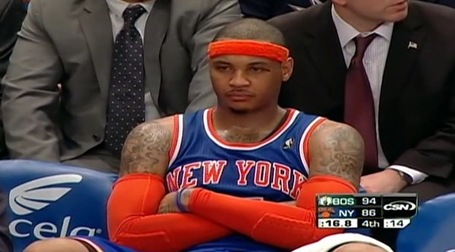 The sweat comes courtesy of Kevin Garnett, who scored 24 points and grabbed 11 rebounds as he triggered a huge comeback by the Celtics late in this game to seal the win.

And the tears? Those would be Spike Lee's as he was comforted by Ray Allen's mom, of all people.

We can't end on tears, though. We leave on Glen Davis' reaction to the hat Spike was wearing during his courtside consoling. Come on, son indeed.