Stan Van Gundy On The Knicks: 'Quite Honestly, We Don't Give A Damn'

Share All sharing options for: Stan Van Gundy On The Knicks: 'Quite Honestly, We Don't Give A Damn' 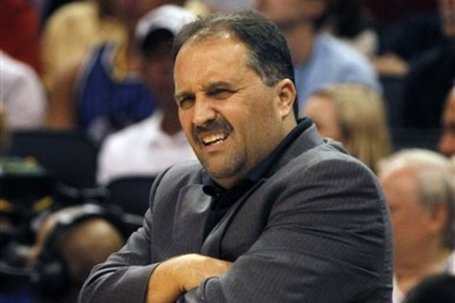 The Orlando Magic lost to the New York Knicks Monday night, but if Stan Van Gundy's back to speaking his mind, then it's a victory for everyone. Indeed, when Van Gundy was asked pregame whether his team was worried about the Knicks, he minced no words. A textbook Stan Van rant comes courtesy of the New York Daily News:

"With Miami at the beginning of the year and New York since the trade, it's like, because so many people are interested in what happens with LeBron, Wade and Bosh and now with Carmelo, Amar'e and Chauncey, you guys think our overwhelming (concern) is 'what's happening with Miami and New York?' Quite honestly, we don't give a damn."

"We don't. I don't care. We're just getting ready to play them. It's not all Miami and New York. I know to ESPN it is, but to the rest of us, we actually think some of the rest of the teams matter."

This is why we love Stan, of course. He's like a cantankerous hedgehog who breathes by way of withering sarcasm and/or exaggerated frowns. When he ran afoul of David Stern earlier this month--and after Stern's sinister promise that "we won't be hearing from him anytime soon"--we worried that perhaps our favorite angry hedgehog would be muzzled.

Thankfully, now we know: Stan's not going quietly. And even if he ends up talking himself into suspensions and fines and eventually out of the league, I'll stand with Stan Van. But he should be careful about calling out ESPN; after all, someone has to broadcast what would be the most epic talk show ever with Stan and his brother Jeff, and I think the Worldwide Leader would be just great in that role.

As for keeping the league's best teams in perspective? Eh... ESPN's not so great at that, and you knew that already. But isn't it nice to get a little reminder from Stan once in a while?