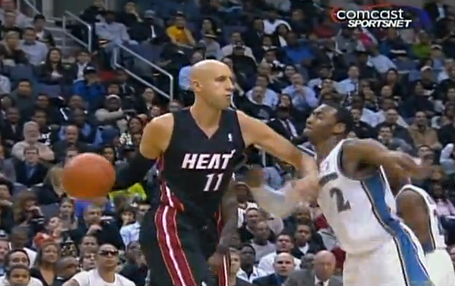 John Wall has a number of athletic advantages over Zydrunas Ilgauskas, but you'd still take the big guy in an even fight. In tonight's game between the Wizards and Heat, the world almost got to witness a throwdown after an Ilgauskas elbow or two drove Wall to punch the Miami center in the ribs:

The key to wearing down a big man is to work the body, a strategy Wall employed but failed to stick with. A fighter of Wall's speed should always try to string together combinations, especially against a slower opponent whose guard is down. At least he didn't try to pop Ilgauskas with one of these punches, because that isn't going to do, like, any damage at all.

Wall was ejected for the punch, along with Ilgauskas and Juwan Howard, who somehow became overly aggressive while trying to keep Javale McGee from participating in the match.

For more on ... this, visit Bullets Forever and Peninsula Is Mightier.