Jazz Should Have Had One Last Chance Against Nuggets

Share All sharing options for: Jazz Should Have Had One Last Chance Against Nuggets

The Utah Jazz lost its Thursday game against the Denver Nuggets 103-101 as Andrei Kirilenko airballed a lay-in attempt with one second left after stealing the ball on Kenyon Martin's baseline inbounding attempt. But video review showed that Martin actually partially blocked Kirilenko's shot after the steal, while Martin's legs were both certainly out of bounds.

SLC Dunk has the damning screenshot. 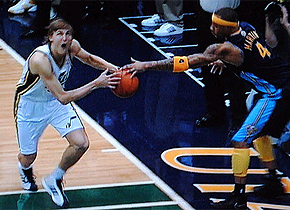 The baseline official -- in the screenshot, you can see his shoes behind AK's head -- didn't call the play dead, and the game ended after Kirilenko's miss. Such a play isn't reviewable as the play wasn't called dead; if the play had been called dead, officials could turn to video review to determine whether the Jazz or Nuggets would have possession. Alas, the official didn't see Martin touch the ball, or simply didn't make the call.

The Jazz would have had less than a second to shoot, meaning either an alley-oop or quick catch-and-shoot would have been needed for the Utah win or overtime.