Orlando Magic coach Stan Van Gundy was in rare form on Monday, commenting on Dwight Howard's suspension and the Miami Heat's crying game. His most bombastic talk was reserved for David Stern, though.

"I certainly can't have an opinion because David Stern, like a lot of leaders we've seen in this world lately, don't really tolerate other people's opinion or free speech or anything. So I'm not really allowed to have an opinion."

That's a not-so-vague Moammar Gadhafi reference, isn't it? Ball Don't Lie's Kelly Dwyer has the sober(ing) take. I, however, would like to investigate SVG's comparison. Is Stern like Gadhafi or other "leaders we've seen in this world lately?" To the Venn-mobile. 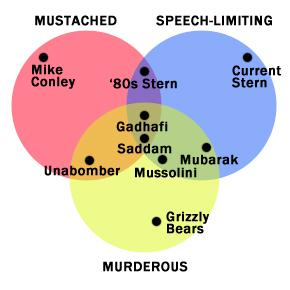 Frankly, there is no there there. Dictators are powerful men who keep their power by silencing critics, either through limits to free speech, by killing opponents, or in many cases both. Often, a mustache is also involved; one could claim the mustache is the piece de resistance in a dictator, the weaponizing element that turns fear into terror. (Some of the most brutal dictators, however, have managed terror without a mustache. Mussolini's shorn face is a testament to the mustache as accessory and not necessity.)

Stern can only be criticized for punishing employees who speak out of turn or criticize the NBA brand; one could argue ripping your employer doesn't exactly fall under free speech rights anyway, and the Commish obviously isn't having anyone offed for crossing him. Stern is no more a dictator than Mike Conley or, heck, SVG himself is. Van Gundy should be ashamed of implying as much.