PORTLAND, Ore. -- To see Bismack Biyombo smile from ear to ear through almost a half hour of postgame interviews on Saturday night was to know that the Nike Hoop Summit has solidified another young international player's NBA trajectory.

For Biyombo, a 6-foot-9, 243-pound forward from the Democratic Republic of Congo, it's a path more than a decade in the making. "I was 7-years-old [when I first saw an NBA game]," Biyombo told SBNation.com. "My daddy was a basketball player and he showed me a lot of NBA games. His favorite player was Karl Malone. He's very similar to Karl Malone. He's strong, he's big. Then he showed me Hakeem Olajuwon. I really wanted to play basketball because I was watching those guys, the way they played. The way they were intense, going to the boards, fighting every time, wanting to win the game every time."

Intense, active on the glass, fighting every play -- Biyombo displayed all that and more in this year's Hoop Summit, as he went from scout's secret to high-rising sensation over the course of a week in Portland, posting eye-popping measurements early in the week and notching the first triple-double in the history of the game. Biyombo finished with 12 points, 11 rebounds and 10 blocks in 28 minutes for the World Team, which lost to Team USA 92-80 at the Rose Garden on Saturday night.

For international players like Biyombo, the result of this showcase is not nearly as important as how he looks head-to-head against his top American counterparts. In Anthony Davis, James McAdoo and Michael Gilchrist, Biyombo was facing three likely lottery picks in the 2012 NBA Draft. Biyombo was the clear standout. 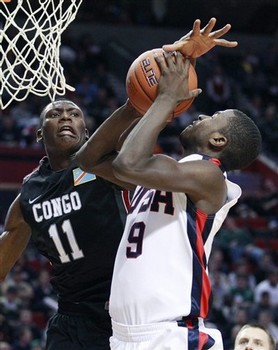 Showcase games always devolve in one way or another, and the second half of Saturday's Hoop Summit became a contest of "Who can drive into the paint against Biyombo and not get immediately swatted." Media members were openly rooting for Biyombo to set the Hoop Summit's blocked shots record as he used his incredible 7-foot-7 wingspan to swallow shots on their way up, catch floaters at their apex and smother attempts at the rim. He succeeds on defense not only because of his length but because of his quickness off the floor: Biyombo plays defense above the rim and he can get there in a hurry.

"It's incredible because you're a little bit in awe," said his coach for the week, Kevin Sutton. "You become a fan watching him play a little bit, it's hard as a coach because he does so many spectacular things ... He came off a plane and we asked him if wanted to practice. He had a long flight from Europe, he said he wanted to practice, he stepped on the court and had an immediate impact, jet lagged and tired. He's a phenomenal talent."

Biyombo, like most of the game's participants, is listed at 18 years old, but he's played professionally in Spain for two seasons, has a massive, sculpted NBA-ready body right now and looked like a man among boys all week, drawing speculation from scouts, fans and media alike about whether he is older than he lets on. Biyombo brushed off the age question in an interview with SI.com.

"I don't care how old he is, Biyombo can play NBA-caliber defense right now," one NBA talent evaluator said on Sunday.

That was the general consensus. Biyombo is ready now, his stock solidified as a 2011 first round pick, with the immediate buzz in the building included the NBA's L-word: Lottery.

"He's raw offensively and needs some molding, but that's a pretty impressive piece of clay," said a league executive, who marveled at Biyombo's overall athleticism and competitive desire.

Biyombo, the ACB's leading shot blocker, is built like a truck, strong enough to defend most NBA power forwards on the low block and also agile enough to step out and ably defend the high post. He plugs in immediately as an eighth or ninth guy off the bench that brings second unit energy and generally wreaks havoc.
The questions for him at the NBA level all come on the offensive side. Biyombo's game is mostly limited to attempts around the rim or second chance opportunities on the offensive glass. and he didn't show an overwhelming amount of confidence in his range during practices this week. On Saturday, he was an efficient 5 for 7 from the field, including some authoritative dunks, but didn't show a full arsenal of moves.
Biyombo knows he needs to fill out his offensive repertoire and continue to be diligent about his shot selection. "Sometimes I have bad shots," he said. "You just shoot the ball and you go, 'No, no, no, no, that was a bad shot.' Today offensively I can say I wasn't in the game."
He then explained that he was not expecting the double and triple teams that Team USA sent at him when he had the ball in the low bock. "They would double-team on me every time. Maybe they watched some video about me. They tried to find me, sometimes just triple guys around me. I was trying to get the ball, it was very difficult, they were big. With everybody that close to the basket, you try to force things. Even if you're trying to kick it out, they're denying the pass line. It was a little hard. "
All that attention was in stark contrast to how teams defend him in the ACB, where he averages 6.4 points and 5.1 rebounds for Fuenlabadra. "They just leave me alone [in Spain]," Biyombo said smiling as always. "I play one-on-one, I have so many chances to play, I have so many open shots, I have so many good shots. Today they really closed the basket, every time I have the ball in the low post, two guys around me, three guys around me. They played smart defense on me."
Biyombo said developing his offense will be a top priority in advance of next season. "I have all summer to work on that. I have a personal trainer, we're almost close to the summer, I will work on my offense and I'll be OK."
He was smiling when he said those words because, after the display he put on Saturday night, he couldn't stop.

Video of Bismack Biyombo at the Nike Hoop Summit from OregonLive.com.