The NBA Playoffs Are Unfair, Just Like Every Other Postseason System

Every year, NBA teams miss the playoffs despite owning superior records to teams that made it into the postseason. This happens in every league, but which are the worst about this? Are we okay with it? Should it be different?

The NBA and NHL playoffs near. Fans of "decent-to-good" teams will sometimes tell you that simply appearing in the playoffs is an unexpected treat, like a lottery ticket folded inside of a birthday card.

Inevitably, though, a team or two will get jobbed out of a playoff spot. It sports a superior record to a team that is making the playoffs, but will miss out because it's in the wrong league or division. This team, more often than not, is a hanger-on, but there are still few things more disheartening, especially if your team is the sort of team that doesn't see the playoffs very often.

This year, the Rockets, Suns, and Jazz are going to miss the NBA Playoffs. These three teams aren't terribly good -- the Suns and Jazz are below .500, in fact -- but they have records superior to that of the Pacers, who have clinched the final playoff slot in the East.

And the NBA is the league with a healthy sample size of games to determine a team's worth, and only one condition (a single partition between the East and West) by which its playoff format must abide. Consider the NFL's relatively tiny sample size and eight divisions, or baseball's scarcity of playoff berths, and it's clear: postseasons aren't necessarily about pitting the best teams against one another. If you are the last team in, you are probably not one of the league's elite. You're just a gaggle of color-coordinated men who got suckered into working overtime. 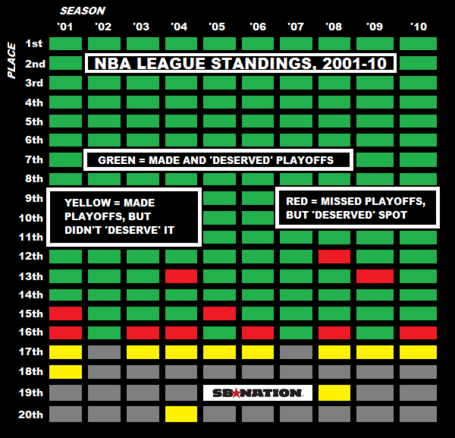 The 2002 and 2007 playoffs shown here are examples of perfectly "fair" postseasons, because the teams with the 16 best records were given slots. The 2004 playoffs, meanwhile, are a perfect example of the issue at hand. That year, the Utah Jazz, who sported the 13th-best record in the league, missed the playoffs, while the team with the 20th-best record, the Boston Celtics, made it.

Far more heartbreaking were the 2008 playoffs, which the Golden State Warriors missed out on despite finishing with a 48-34 record. That's a .585 winning percentage -- to put that into perspective, .585 would have won you four of the six divisions in baseball last season. The spot was given to the 37-45 Atlanta Hawks, who, to their credit, took the NBA-best Celtics to seven games in the first round.

Here is how baseball's playoffs have shaken out lately. 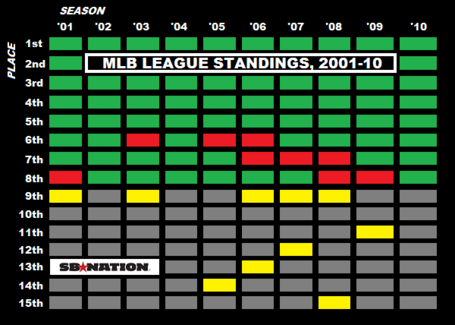 Given the relatively small number of playoff spots, slighting a "deserving" team is even less forgivable in baseball. In 2005, the Cleveland Indians were stacked. The rotation was led by CC Sabathia and Cliff Lee (albeit before they hit the primes of their careers). Every player in the starting lineup hit at least 16 home runs. The team recorded a run differential of +147, the second-highest in baseball.

Unfortunately, their 93 wins weren't enough for them to beat the White Sox in the A.L. Central or the Red Sox in the wild card race. They missed the playoffs. Meanwhile, an 82-80 Padres team with a negative run differential made the playoffs and were swept in the ALDS. 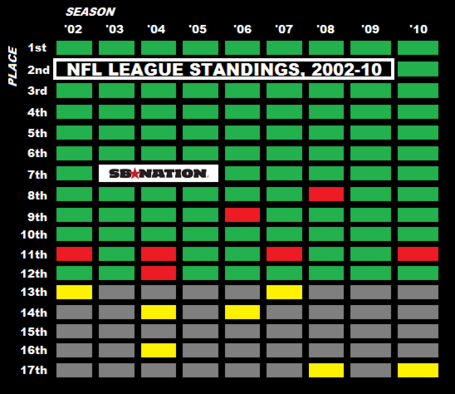 I didn't include the 2001 NFL postseason here, since the current playoff format wasn't yet in effect.

There are a lot of 8-8, 9-7, and 10-6 NFL teams each year, so naturally there will be a 9-7 team that makes it to the postseason and a 9-7 team that doesn't. Since there are 16 games in an NFL season, the sample size is really too low for the standings to be meaningful. All football teams are pretty much the same. Shrug. Moving on. 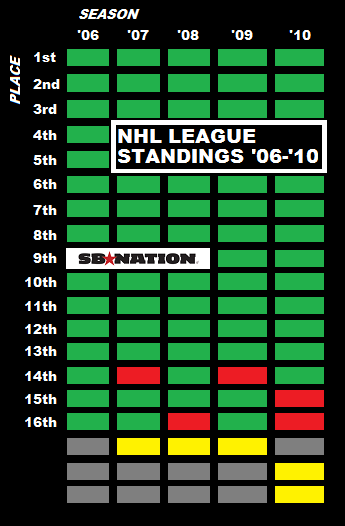 I limited this chart to date back only to the 2005-06 season, when ties were eliminated. Given the NHL's point system, its standings are sort of a different animal.

So what are these charts telling us? By league, here are the percentages of playoff berths awarded to "undeserving" teams (in other words, teams with records that are inferior to teams that miss the playoffs):

The NBA figure, as compared to the NFL figure, is what's most interesting to me. Don't we partition teams into leagues and divisions, in part, because we're willing to sacrifice a little "fairness" for the sake of drama? If you're a 60th-percentile NFL team, the division you're in plays significantly into your odds of making the postseason. In the NBA, meanwhile, the division you're in doesn't matter, at least not directly. Despite this, the two leagues are just about equally "fair."

The fact remains that once or twice a year, each league will see an inferior team reach the playoffs.

Add wild card spots to the NBA playoff system. Mr. Ziller suggested we simply abolish conferences and throw the 16 best teams into the playoffs. That works for me, but if we're insistent on dragging the silly conference denominations into the 22nd century, we can always add wild card spots.

Take the playoff format as is, subtract the eighth playoff spot from each conference, and add two wild card spots that can be claimed by teams in either conference. If you look again at the NBA chart above, you'll see that many of the "fairness" issues involved the 16th- and 17th-best teams. This system would have resolved those issues.

This system redefines fairness by redefining the objective: beat the team with the Cup and then don't lose, ever. Simple enough.

Replace NFL standings with adjectives. In a sense, the winner of the Super Bowl is necessarily the best team, because it is the only team to have completed the only objectives that actually matter. In another sense, a hypothetical but predictive sense, the winner of the Super Bowl is not necessarily the best team. If the 2008 Patriots were to play the 2008 Giants a hundred times, which team would win more games? The answer is the better team, and the better team is the answer.

We should stop fooling ourselves into believing that within the laughably small sample size of an NFL season, we can definitively rank teams on the merits of how good they are. To drive the point home, let's stop describing them with numbers. Let's start describing them with words. Here are what the 2010 NFL standings would have looked like in my format.

Now, isn't that better? Use these standings to create any playoff format you want, because it does not matter.

Abolish baseball. Baseball is boring. A bunch of guys run around and throw a ball and hit it with a bat. What's the big freaking whoop, you guys? This would also solve the problem of there being a baseball postseason.