Our first edition of the daily 2011 NBA Playoffs memes focuses on the manufactured Chris Paul vs. Derrick Rose debate, the cancerous Carmelo Anthony ruining everything, the beautiful Thunder vs. Nuggets series and more.

We celebrate the big stories everyone is buzzing about after each day of the 2011 NBA Playoffs. In Monday's opening edition: Chris Paul>Derrick Rose (maybe), Carmelo Anthony gets the New York media going, Thunder vs. Nuggets makes bloggers swoon, Dwight Howard has no help and the Grizzlies win and lose, all in the same day.

Who is the best point guard in the NBA again? Chris Paul certainly showed us why it's still a debate, dropping 33, 14 and seven in leading his horrendous Hornets supporting cast to a 109-100 win over the mighty Lakers. Paul has been lurking in the shadows all season, shackled by a revolving door of players, his own injuries and the anonymity (only two national TV appearances all season) that New Orleans offers, but all it took for us to remember his greatness was this signature performance. Bill Simmons probably said it best when he tweeted this.

But of course, because this is 2011, those NBA dieharts who knew Paul was spectacular all along had to bring up how Paul just proved he's better than Derrick Rose too. (Full disclosure: I participated in this, gleefully. Too gleefully, in fact). Given the way Rose began the playoffs just one day ago -- 39 points, 19-21 from the free-throw line and huge plays to bring his team back from a 10-point deficit to get a win -- the discussion is almost ridiculous. But that's what happens when one is never on TV and the other is so much a part of the 2010/11 narrative that he caused color commentator Jon Barry to don his pom-poms (figuratively) and gush over a one-on-one fast break against his fellow point guard (this actually happened).

The real truth is that each is spectacular in their own way, and each showed the very best of their game in their respective playoff wins. To put it another way, Rose had one of his most Derrick Rose performances ever, and Paul had one of his most Chris Paul games ever. We really should just sit here and celebrate both of them. Or, we could say one was better than the other and explode with a series of witty remarks about how the skeptics were right all along. Option No. 2 seems more fun anyway.

The Knicks blew a very winnable game in a loss to the Celtics, doing so in the same kind of way they blew winnable games all season. Luckily for New York media, there's a clear scapegoat: Carmelo Anthony. In the final two minutes of the game, Anthony ignored his red-hot teammate Amar'e Stoudemire, committed a devastating offensive foul, screwed up the defense on Ray Allen's game-winning bucket and demanded the ball late to wind down the clock and shoot a wild three-pointer over two defenders. He also killed Stoudemire's puppy, caused Chauncey Billups to get injured, forced Mike D'Antoni to shave his mustache and fired Donnie Walsh all by himself. Some of these things are true, and others are what headlines like the New York Daily News' make you believe. 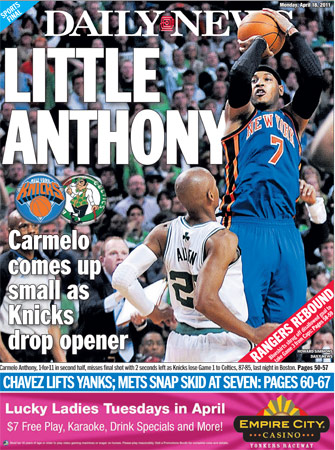 Here's the way I saw it, at least.

Anyway, the Knicks lost because they collectively ignored Stoudemire and had a horrible third quarter. But blaming Anthony is so much more fun.

Do you hate the NBA? It's your right, I suppose, but maybe you should watch Game 1 between the Thunder and the Nuggets and then get back to me. The two most watchable teams in the Western Conference playoffs staged a Game 1 for the ages, dashing up and down the floor and providing several awesome highlights in the final game of the weekend. In case you missed said highlights, here they are.

Oklahoma City won in the end thanks in part to a very questionable call on a tip-in, but the real winner was America, or at least the portion of it that stayed up to see that game.

4.  Dwight Howard scores 46 points, and all of them were meaningless

Apparently, it is possible for an NBA team to allow a player to score 46 points and be universally praised for it. Dwight Howard ran all over the Atlanta Hawks' single-coverage, but because nobody else on his team decided to do much of anything, the Hawks came away with a Game 1 victory on the road. Howard and Jameer Nelson scored 73 points; everyone else on the Magic scored 20. Howard and Nelson shot 26-41; everyone else shot 8-34. It was a brilliant strategy by the Hawks to make sure that their horrible teammates had horrible games. Let's praise them for it!

Snark aside, the bottom line is this. Playing Howard straight-up and taking away the three-point shooters is a strategy. Allowing Howard to score 46 points and hope his teammates shoot 8-34 is not. Luckily, the Hawks shot nearly 50 percent from 16-23 feet and made it work. That doesn't mean it's a sustainable long-term strategy, but whenever writers are given the chance to question Howard's worth as a player for being just the 11th player since 1985 to score 45 or more points in a playoff game and lose, they'll take it.

5.  Memphis beats the Spurs and gets ridiculed, all in a day's work

Could you possibly have scripted a more fitting moment to signify the strange rise of the Memphis Grizzlies than Sunday? In one flash, the Grizzlies secured their first-ever playoff win on the road over the mighty Spurs thanks to a game-winning shot by the consummate teammate, Shane Battier. In another, the team is giving Zach Randolph $66 million dollars guaranteed just weeks before an NBA lockout promises huge rollbacks on player salaries. Right, because that worked out great for the Blazers. Even on a happy day, the league laughs at the Grizzlies.

For the here and now, Memphis is a legitimate threat to the Spurs, even with a healthy Manu Ginobili. The Grizzlies didn't even play all that great, leaving tons of points on the table on the free-throw line and with wasted possessions, and they still won. As for the future? Paying $200 million for Mike Conley, Rudy Gay and Zach Randolph sounds like fun!

Honorable mention: Miami wins, everyone sneers ... Jason Kidd parties like it's 1999 ... Brandon Roy's knees party like it's 2020 ... Carlos Boozer parties like he does every year in the playoffs.