The Miami Heat And LeBron James, And Why It Still Feels Strange

Nobody's been dissected more than LeBron James this year, but with the Miami Heat in the 2011 NBA Payoffs against the 76ers, a trip to South Beach and a meeting with Nike offered some new insight into LeBron, his new home, and why it still doesn't totally fit.

Share All sharing options for: The Miami Heat And LeBron James, And Why It Still Feels Strange

LeBron James had his new white shoes on, the Heat fans had their white shirts on, the ABC cameras were rolling, and after putting up a fight early, the Sixers eventually rolled over, and the Heat won an easy one.

That's how the NBA Playoffs began in Miami this weekend, and I was there to see it all—mostly because of those new white shoes LeBron wore. Nike's LeBron Air Max 8 PS, to be exact.

To help promote the shoe's release this past weekend, Nike flew a handful of writers down to Miami to test LeBron's playoff shoes, and just like that, I had tickets to the Heat's first playoff game, an appointment to play pickup hoops on Miami's home court, and what turned into a behind-the-scenes look at the LeBron Machine in Miami.

Indeed, aside from the royal treatment we got from Nike all weekend, it was also a firsthand look at how the sausage gets made. With LeBron's shoes, and just in general. The curtain was peeled back.

We played pickup hoops in an empty Heat stadium while employees set out 20,000 Witness T-shirts for the next day's game. We heard Nike's LeBron designer talk about how they plan his shoes (while LeBron debuts the 8s this week, the 10s are already in development for 2013), and what he tells them when they make their shoes.

"Lock me down so I can fly," he told them this year. And, "Protect me from myself." So in case you were wondering, the answer is yes—even in private, it appears that LeBron James always talks like LeBron James.

We even got to fidget with one of those Nike air bubbles... 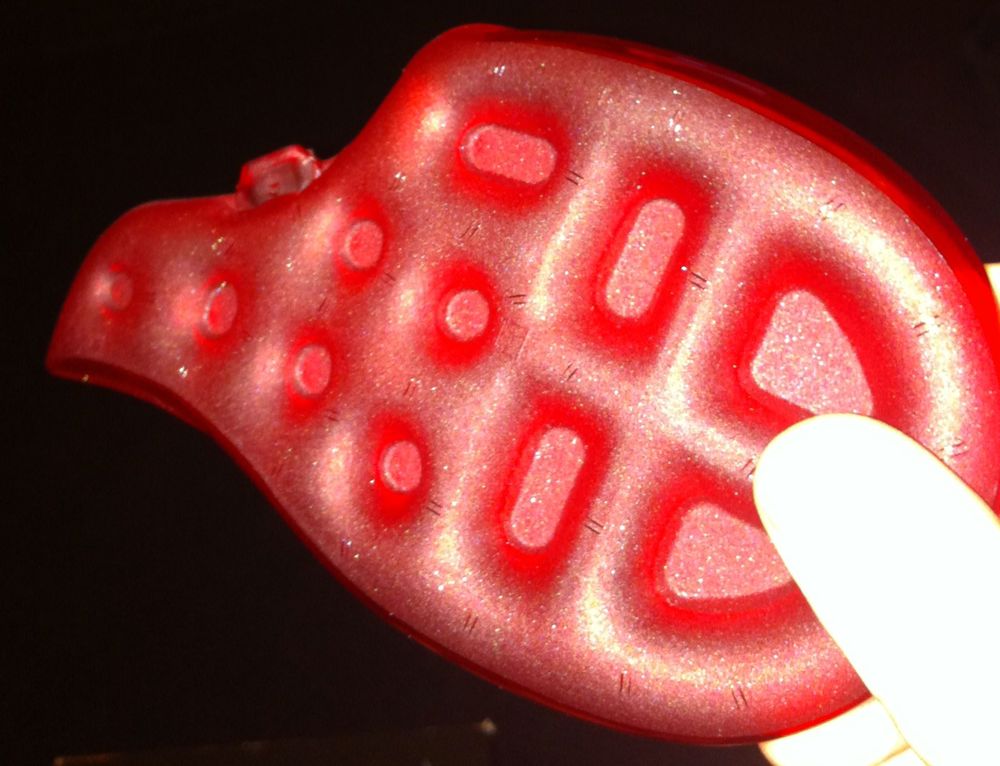 If nothing else, the whole weekend helped me understand why LeBron went to South Beach. The first guy I met in Miami was driving me back from the airport. We talked about the weather, naturally, and he told me, "It sure beats the hell out of where I grew up."

"Cleveland," he said. Of course.

So when I became the 10,000th person to ask him how he felt about LeBron leaving the Cavs, he laughed and asked, "Wouldn't you? I was sad to see him leave the city, but if he had to go anywhere, I'm glad he came here. And I can't really blame him, obviously."

It all reminded me of that Chris Rock interview from a few months ago. "People move from Cleveland to Miami every fucking day," he said then. "They don't move from Miami to Cleveland." 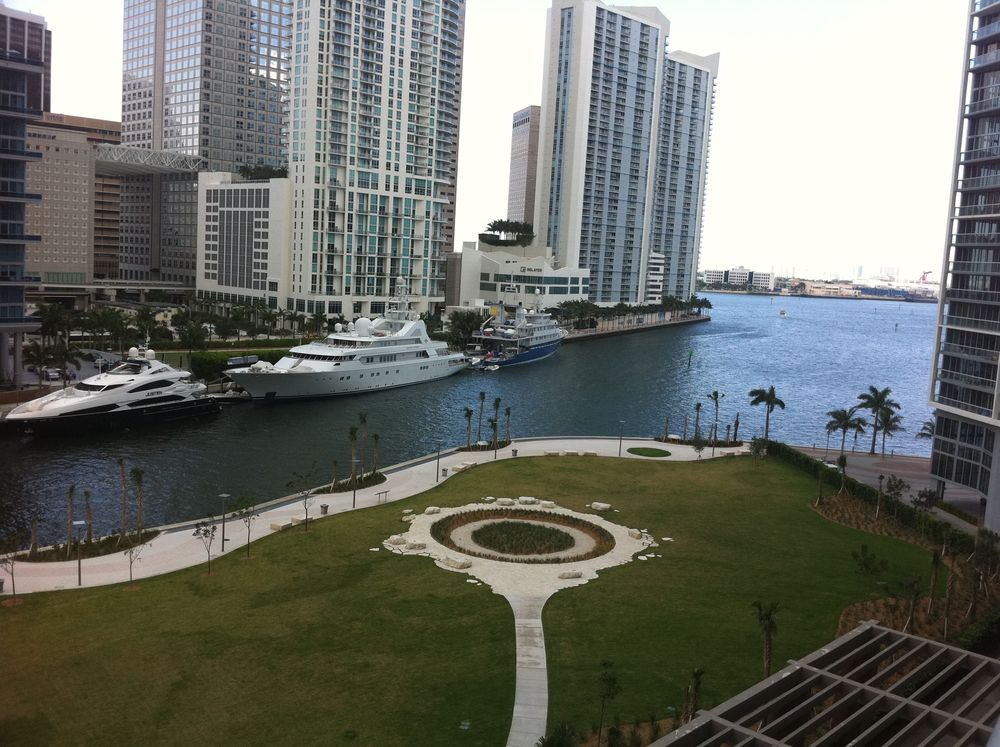 'Course, that doesn't mean it's any less ridiculous. It may seem normal to the people that live there, but even for a weekend, going to Miami is like a window to another universe.

When LeBron first signed there last summer, this is what I wrote:

[Miami] is ... sort of a fascinating experiment—the entire city is like that super trendy nightclub that you visit once a year, just to peer in at what all these beautiful people consider life. Miami's like the VIP section of American cities. ... as a place to visit and people-watch, or a place for LeBron James to spend the rest of his career? Perfect. In Miami, nobody will care that there's not much beyond the veneer of hype with LeBron.

Because Miami only cares about the exterior, and that's LeBron's specialty. Just by showing up and being internationally famous and throwing lavish parties at The W, LeBron James will be a huge success on South Beach. It's his destiny, really.

Keep in mind, LeBron's spent his entire adult life surrounded by the people that spent the weekend wining and dining me. People who cater to his every need, hang on his every whim, and build lavish marketing campaigns around him whether he chokes against the Celtics or not.

"There's also this notion of the lion," said his shoe designer, Jason Petrie, in a presentation to the writers before our test began. "And LeBron is obviously associated with the lion. He's the beast, the King of the Jungle... Something that's been an important part of his storytelling for a while."

Imagine if you were surrounded by people that compared you to a lion with a straight face. "And we started looking at a lion and its prey," he continued. "How it feeds. So we really kind of honed in on this notion of stalk, attack, kill. These three different phases... How a lion is stalking on the edge of the Savannah, looking for something to eat, and he spots his prey, jets after it, and sinks his claws in. There's three distinct moments to that chase. Very similar to the chase for a championship."

[Clicks to next slide] "And you look here at a series of Lamborghini Gallardos..."

...When I say I understand where LeBron's coming from, that's not to say where he's coming from makes any sense whatsoever. It's just, if you spent your entire adult life having people liken you to lions and Lamborghinis, you'd probably gravitate to a place like Miami, too.

As for the Heat game, it wasn't quite as horrifying as you might think. Miami fans have been pretty easy targets for the rest of us, but up close, the "FAN UP" experience is harder to ridicule. More than anything, the whole spectacle's just bizarre, and befitting of the city itself.

Nowhere else would a franchise think it would be cool or somehow intimidating to dress an entire stadium in white. Especially if that city's most famous export is cocaine. But the Miami fans are honestly oblivious to these ironies, the same way the franchise thought that Godforsaken championship celebration was a good idea last summer. To the people down there, it all makes perfect sense.

But you can't say Miami doesn't care. They just don't show it the way most other cities do. They don't realize the way it looks like when 25 percent of the fans show up late or when it takes them an extra 15 minutes to get back to their seats after halftime.

Miami, as a sports town, is like the sports fan who didn't grow up with older family members to teach him how to watch sports. They love their team; they just don't have the same rules for watching sports that the rest of us learned. So, you can look down on them for being ridiculous and/or annoying, but they do care.

What's funniest about the Miami fans, though, is how weird a pairing they are with the team they have. You get the sense Miami would be better off with a team like the post-Melo Nuggets. A fun, freewheeling roster, full of athletes and strange characters. Instead, there's a disconnect between the mood with LeBron, Wade and the Heat and what you feel in the stands. On the court, the Heat try to play ruthless; you see this after every dunk, for instance, when LeBron or Wade mean-mugs for the camera about five seconds too long.

In a lot of ways, it feels like the Heat's Big Three want to be seen as the NBA's version of Fab Five. The guys that did it their way and changed the rules forever. They'll shock the world whether the world's ready for them or not.

But A) That's not how this has played out with the rest of the world.

And B) That's not how it plays out in Miami.

So, it was strange sitting through their game on Saturday. When the PA system played the instrumental for C-Murder's "Down 4 My N****as" during introductions, it totally fit with how the Heat want to appear, and you could tell the players fed off the energy. But then, the crowd went so much crazier for the "Miami Heat Rhythm Section", the live merengue band that played between timeouts. And that disconnect is why it's so hard to take LeBron and the Heat seriously.

You can't wear the black hat if you're surrounded by 20,000 people dressed in white. 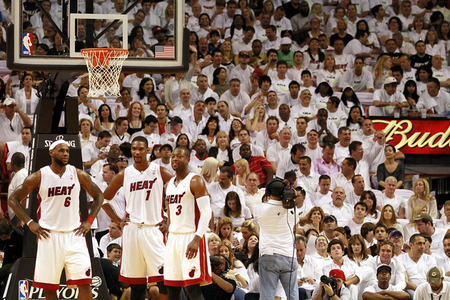 In the end, that's what stuck with me this weekend. That disconnect... Between what LeBron believes about himself, what Nike believes about LeBron, and reality. Between Miami and the rest of the sports world, and between the Heat and most of their fans.

Hearing from the marketers who bred the King of the Jungle, and then seeing him up close in his strange new habitat—looking at all the ingredients, you can see why the finished product isn't quite as great as it could be. The recipe doesn't totally make sense yet. Maybe it will in time.

For now, though, despite promising ingredients and the same people cooking up the finished product, selling shoes or otherwise, King James is still a long way from Air Jordan...