Harrison Barnes decided to delay his ascension to the NBA for at least another year, and he's going to regret it. Not because of the delay on his NBA riches, which may not even show up next winter due to the potential lockout. Barnes won't regret staying in school because the NBA lifestyle is somehow more fun than being King of Chapel Hill, which Harry will certainly be. He won't regret his decision because a good recruiting class will squeeze Barnes' featured status.

No, Harrison Barnes will regret staying in school and bypassing the 2011 NBA Draft because there is no way -- no way! -- that in 2012 or 2013, whenever he does make the jump, the green room at the draft will have way, way less leg space than it will this year. Way less.

With that said, let's look at the players who will be in the green room in June in our latest 2011 NBA Mock Draft. Emphasis on the "mock." We'll use the pre-lottery draft order; things will get shaken up on May 17.

1. Timberwolves: Kyrie Irving, PG
Yep, another point guard for David Kahn and this aimless, awful franchise. The difference: this one is good and won't sign a multi-year contract in Spain after he's drafted. We think.

2. Cavaliers: Derrick Williams, F
Cleveland needs help everywhere; it won't matter if Williams is a true power forward or small forward at the pro level. He's a great prospect, and he has a pulse. That's enough.

3. Raptors: Jonas Valanciunas, C
The big Lithuanian both fits Toronto's international bent and fills a huge need for the Raptors: a center who isn't allergic to paint.

4. Wizards: Terrence Jones, SF
Nothing hurts Washington's draft more than Barnes escaping, because this team has young, promising players at every position but small forward. I'm counting Kevin Seraphin and Trevor Booker as the promising power forwards, by the way. Not Andray Blatche. Never again.

5. Kings: Kawhi Leonard, SF
Sacramento also needs a small forward, if Irving can't be had. The Kings maintain an interest in re-signing Samuel Dalembert, but pure logistics could dictate a need to pay attention to the center position too, given DeMarcus Cousins' success at power forward late this season. 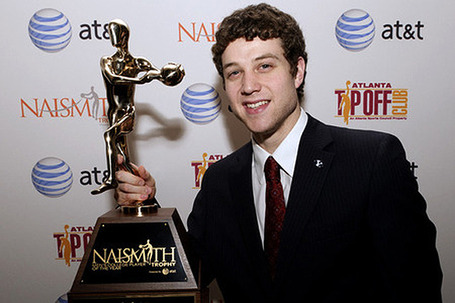 7. Pistons: Kemba Walker, SG
What's a combo guard between friends? Walker can join Rodney Stuckey (a restricted free agent) and Ben Gordon in Detroit, where Rip Hamilton will be back on the trading block all offseason. The Pistons have depth at small forward (Jonas Jerebko, Austin Daye) and a good starting center in Greg Monroe. Other than that? Who knows.

10. Bucks: Kenneth Faried, C/PF
It remains to be seen exactly what changes this offseason for Milwaukee. Hope Andrew Bogut heals and try again? Or attempt to move some of the disappointing wings? Power forward has been a struggle, and Faried could at least provide consistent rebounding there.

12. Jazz: Brandon Knight, G
Utah needs a few guards, then a few more guards and then a few more. And maybe another. Earl Watson and Raja Bell were starting games late this season, but only because Ronnie Price wasn't available.

13. Suns: Donatas Motiejunas, C
That's right: we have two sure-fire Lithuanians in the first round, likely the lottery. Unless they decide to sign long-term in Europe. ... Wait, a Euro-heavy draft and labor uncertainty could leave us with even thinner draft? Let me find some wood to knock on.

14. Rockets: Keith Benson, C
The No. 14 pick seems to be the right time to play mid-major darts.