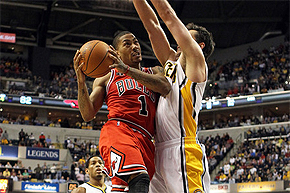 Derrick Rose has been saving the Chicago Bulls throughout this first-round NBA Playoffs series against the Indiana Pacers. The presumptive MVP has hit incredible shots in the final minute of each game, and his pinball game-winner on Thursday was no exception. But something has been saving Rose in this series: his new-found foul-drawing ability.

Rose has shot an awful 37.9 percent from the field against the Pacers, and has hit just four of 20 three-point attempts. His effective field goal percentage, which simply adjust field goal percentage for the greater value of three-pointers, is just .409, an awful figure even in the playoffs. Yet Rose has been Chicago's best and most important player, and perhaps the MVP of the playoffs so far.

Why? Because he's been living at the line.

In three games, Rose already has more free throw attempts than he did over 12 previous career playoff games. (Those games include quite a bit of overtime, too.) Rose has been to the line 49 times already, with some 16 attempts per game. He's averaging 32.7 points per game in this series. Here's a breakdown of where those are coming from. 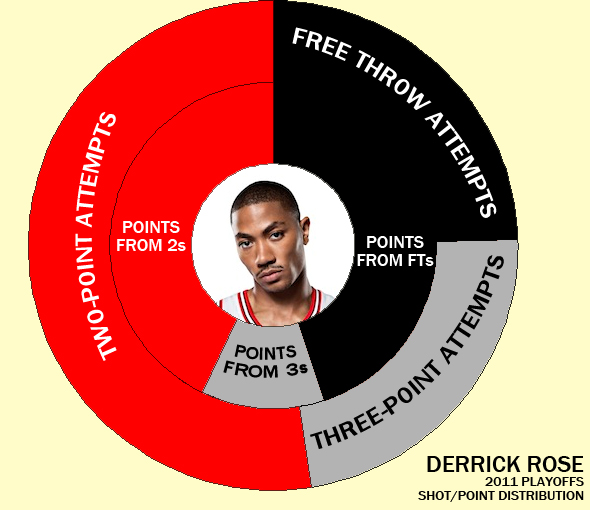 * Some 53 percent of Rose's shot attempts have come on two-pointers, but just 43 percent of his points have been scored on successful twos.

* Twenty-three (23) percent of Rose's attempts have been three-pointers. Rose is only getting 12 percent of his points from beyond the arc.

Of course, those extra foul shots aren't coming out of nowhere -- he's taking more of the Bulls' shots than ever, and if he weren't drawing fouls so regularly, he'd be taking more long twos and three-pointers, most likely. Based on his results in those categories during this series, Chicago needs to thank its lucky stars Rose has become more committed to getting to the foul line ... and that the Pacers and referees are obliging.