The Knicks Fall Short, But S.T.A.T. Stands Taller Than Ever

The New York Knicks were swept out of the 2011 NBA Playoffs by the Boston Celtics at Madison Square Garden on Sunday, but while everyone talks about the Knicks' collapse, don't forget Amar'e Stoudemire, and how quickly things can change.

Share All sharing options for: The Knicks Fall Short, But S.T.A.T. Stands Taller Than Ever

Against a Boston Celtics team clicking on all cylinders, the New York Knicks never stood a chance. We knew this. If we didn't, then we should have known. So it's no surprise, then, that with KG and Rondo at their best, Sunday saw an easy Celtics win and an exclamation mark on a four-game sweep that sends Boston to the second round.

Looking back, the only reason anyone thought the Knicks had a chance at all was because of the Celtics' struggles late in the regular season. With Boston sleepwalking, we thought New York could steal one or two on the road, win at MSG, and make things interesting.

It seemed like a seven game series—so long as the Celtics remained half-dead throughout. But Rajon Rondo came back to life over the past week, and just like that, the Celtics became a different team, and the Knicks got one giant reality check.

More than anything else, this series put the Knicks' renaissance in perspective. They may be better than they've been in a decade, but that's nowhere near good enough. They may be relevant on a national scale, but that's not to say they're relevant in the Eastern Conference. And they may have had the single best player in the series, Carmelo Anthony, but the Celtics had the next best four.

I mean, Anthony Carter played 23 minutes in Game 4. Of course it was a sweep.

But while we're putting things in perspective ... Can we talk about how far we've come with Amar'e Stoudemire? Did anyone see this coming 18 months ago? If you want to talk about the Knicks getting outclassed, then Amar'e is an example of how quickly class can change. 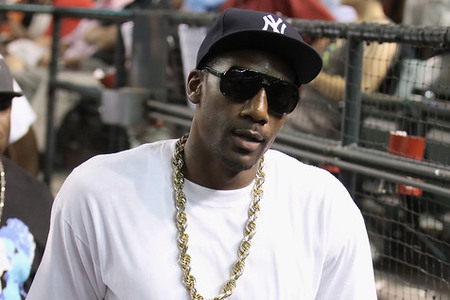 Remember ... The guy they called S.T.A.T. in Phoenix may have been Standing Tall And Talented, but he was also the same guy who, in Jack McCallum's book about the D'Antoni Suns, Seven Seconds or Less, came off as A) Lazy B) Arrogant C) Mercurial and D) Injury-prone.

So, as problematic, overrated superstars go, Amar'e had all the bases covered at an early age. He even had a crazy mom to make everyone feel just a little more uncomfortable.

(BTW: Is there any better adjective for a troubled superstar than "mercurial"? That's basically everyone's way of saying, "This guy's just a pain in the ass to deal with and we don't understand why he acts this way." ... And was there any better word for Amar'e? Even the way he spells his name, with the accent that you always forget and doesn't really make sense... So mercurial.)

When he signed with the Knicks this past summer, he immediately proclaimed himself the savior, and—people forget this now—but for all the Hawks propaganda about Joe Johnson as a superstar, "Amar'e Stoudemire, Franchise Player" sounded just as ridiculous. He was an emperor wearing max-contract clothes that were supposed to go to someone else.

But that's not the surprising part. We knew he was going to talk like a savior after signing a max-contract and inheriting a fanbase desperate for someone to worship. But the thing that caught off everyone off guard was that when the season got going, he still played his part.

Almost like, by walking and talking like a true superstar all summer, Amar'e started believing his own hype, and acted accordingly once the games started. It's sounds pretty simple, but from a personality standpoint, what we've seen from Amar'e Stoudemire is really kind of surreal.

The selfish, mercurial malcontent that found a way to poison a locker room with Steve Nash somehow became the consummate team player, and the superstar the whole team could count on. I mean, just look at all the different places that Amar'e might have quit in the past nine months. Where the old Amar'e would have quit.

When the Knicks started 3-8, and the New York City media began to circle like vultures—old Amar'e might have pouted and complained. He didn't, and the Knicks recovered. When midseason hit, and Mike D'Antoni was playing him 40+ minutes-a-game, and tempting fate with his knees. Old Amar'e might have complained or had his agents intervene. Again, didn't happen. When Carmelo arrived, and acted like the go-to guy for the team that'd Amar'e had been carrying all season long. A problematic superstar would have gone beserk over this, but Amar'e deferred to Carmelo for the sake of the greater good, knowing that he couldn't win anything without him.

Then, with the Celtics carrying a 3-0 series lead into Madison Square Garden and the series pretty much overwith, Amar'e was nursing back spasms that'd left him immobilized for a solid five days. It would've been easy to let his team take the inevitable loss here, especially since Amar'e wasn't going to be healthy enough to make much of a difference regardless.

But there he was on Sunday, playing 44 minutes, scoring 19 points and grabbing 14 rebounds. God only knows how many cortisone shots it took to keep him upright for that long, but he did it. Afterward, over at ESPN.com, Ian O'Connor hit on Stoudemire's progress with some quotes from Mike D'Antoni, the guy who coached him in Phoenix and has to be as shocked as anyone:

"He is an unbelievable physical talent that has molded into a great man and leader," D'Antoni said. "I think everybody in the NBA tries to show leadership on and off the court, but it is up to the individual person to grab hold of it and he really grabbed hold of it."

"I didn't realize how good he would be in tough situations," D'Antoni said. "When we were 3-8 he could have gone south on us. When he has a bunch of rookies playing with him and encouraging them and giving them his muscles, his strength and his will to win, you can't imagine that."

None of this is to say Amar'e Stoudemire can save the Knicks by himself, or even with Carmelo Anthony's help. If nothing else, this season proved that much. But this season also proved Amar'e is more than just a shiny consolation prize in the LeBron sweepstakes. And if the NBA Playoffs are where you can't escape the truth, then we can't label the Knicks impostors without also mentioning that Amar'e is absolutely the real deal.

He may not have led the Knicks to a win on Sunday, but even as they wandered onto the Celtics' chopping block, healthy or not, Amar'e wasn't going to let anyone else lead them.

It makes no sense to me, either.

But at the end of a soap opera that only promises bigger questions for the next season, we know this much: Amar'e stands taller than any of them right now. And for a franchise with a knack for chasing fool's gold, it looks like they finally have the real thing—Amar'e, the fool that talked himself into becoming a bonafied king. If he can do it, then why not the Knicks?