Mike D'Antoni, Stan Van Gundy And Why Pretending We Can Judge NBA Coaches Is Absurd

Mike D'Antoni and Stan Van Gundy have been considered two of the smartest coaches in the NBA ... and they could be out of jobs by next week. So continues the great mystery of what makes a good NBA coach.

Share All sharing options for: Mike D'Antoni, Stan Van Gundy And Why Pretending We Can Judge NBA Coaches Is Absurd

When Mike D'Antoni became a free agent coach in 2008, after leaving a string of wild success with the Phoenix Suns, he was considered an out-and-out genius, at least on offense; the man won Steve Nash two MVPs, and Amar'e Stoudemire, Shawn Marion, Quentin Richardson and Joe Johnson untold millions. The Chicago Bulls pursued D'Antoni in the long aftermath of the Scott Skiles disintegration, until Jerry Reinsdorf blubbered about defense or something, only to hire Vinny Del Negro, a man who actually thought it acceptable to scream in opposing shooters' ears and who, after coaching him for a substantial period of time, thought Kirk Hinrich's name was "Kurt."

Now D'Antoni is going to have all eyes on him as mysterious and objectively awful Knicks owner James "Jimmy" Dolan makes a decision on New York's front office and coaching staff. As it turns out, Del Negro won more playoff games with the Bulls in two years than D'Antoni did with the Knicks in three; though The Notorious V.D.N. had Derrick Rose, he peeled off three against a Boston Celtics team identical (if less healthy) to the one that just swept New York. So, is V.D.N. a better coach than D'Antoni after all? Are we all idiots for having ripped Reinsdorf back in 2008?

It's not that simple, just as the D'Antoni hire in New York wasn't that simple, and the future of Mike D., Stan Van Gundy, Frank Vogel, Rick Carlisle and all of the other unsettled coaches in the NBA Playoffs are not at all simple. We still struggle mightily to judge NBA coaches, with incredibly little agreement on even how much coaches impact performance, let alone any sort of measurement of that impact. With so little understanding of how coaching impacts results, how can we judge decisions that teams make on guys like D'Antoni or Van Gundy?

The Atlanta Hawks-Orlando Magic series is rife with stomach-churning doubt. Van Gundy is considered one of smartest basketball coaches on the planet, a lifer with an amazing system, passion beyond reproach and a white board straight out of A Beautiful Mind. All of the basic tenets of advanced basketball metrics seem to be built into his understanding of the game -- the copious three-pointers, the shunning of mid-range jumpers, the focus on shot defense instead of turnover creation. Few coaches fit the title "basketball genius" as well as Stan Van Gundy.

And he's just getting his ass handed to him on a platter of doom by Larry Drew.

Drew, a coach in his first season in the NBA's big chair. Drew, a coach who still thinks it's OK to sit his best player, Al Horford, for the entire first half because of two fouls. Drew, who took a flex offense Mike Woodson had ranked No. 2 in the league last season, kept the entire roster, turned it into an isolation showcase for Joe Johnson, Josh Smith and Jamal Crawford with traces of high-post action from Horford, and found it ranked No. 20 by the end of the season.

Atlanta's defense during the regular season wasn't anything special; the Hawks ranked No. 13, just as they had under Woodson, while the offense fell off the rails. That's why Atlanta objectively looked like the second-worst team in the playoffs (behind the Pacers) -- they had a bad regular season buoyed only by a series of close wins over bad opponents. They played like a .500 team during the season, got lucky frequently enough to come out with the No. 5 seed, and looked like surefire roadkill against the team that killed them last postseason.

Instead, it's beginning to look like they caught the right opponent, the Magic, at the right time, did some smart things to mitigate Orlando's reliance on the three-pointer, played the whole "let Dwight Howard kill us; we'll survive" routine that almost never works. It's working! And Drew is a game away from earning a berth in the second round while S.V.G. is potentially in the firing line.

Stories like this are everywhere. Remember when Doc Rivers was the worst coach ever, back when the Boston Celtics were bad, pre-Kevin Garnett and pre-Ray Allen? Under Rivers, Boston has two NBA Finals visits, one championship and more wins than anyone but the Los Angeles Lakers since 2008. Kurt Rambis, student at the feet of Phil Jackson all those years, a true disciple of both the Triangle and the Zen way? Quite possible the most overmatched head coach we've seen since ... well, his predecessor Randy Wittman.

Keith Smart seemed like a brilliant replacement for Don Nelson in Golden State ... until we realized that while he could reach players Nellie had alienated (Monta Ellis, most importantly), he couldn't suck one ounce of defense out of his roster. Paul Westphal, who looked alternately like a deer in headlights and a man thinking about his next fishing trip over about a season and a half, rallied the Sacramento Kings to an improbably hot finish and cinched his job for at least another year.

And in perhaps the greatest case of "why do we even try?": Frank Vogel, a man who you could mistake for a man selling you frozen meat out of a refrigerated truck, has the Pacers playing like ... well, Tom Thibodeau's Bulls! Indiana peeled a win off of Chicago on Saturday, validating the way the Pacers have been playing in this series. Vogel has motivated a bizarre collection of young players with no tangible hope to fight their asses off against a megalith; to watch A.J. Price, Paul George and -- most improbably -- Mike Dunleavy go so hard is something else. Frank Vogel has likely won his job, and he might even deserve it. He might be the next Van Gundy, even. 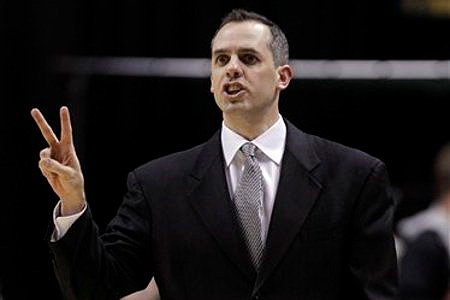 Wait, is that a good thing?