How Lakers Make Triangle Offense Work In The Post 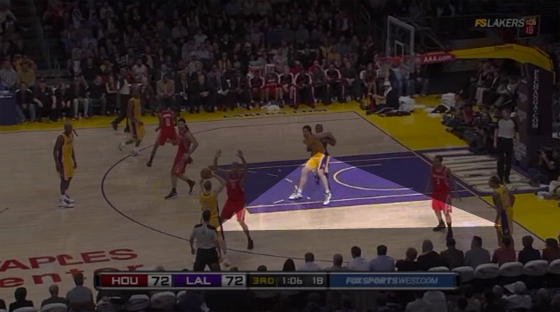 The play starts with Shannon Brown dribbling the ball into the corner.  Once Steve Blake gets to the wing, Brown kicks it out to him and Gasol comes over to the ball side block.  The Lakers now have their triangle set up. 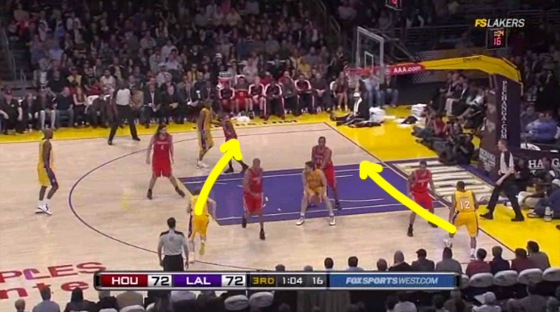 Once Gasol comes over, Blake makes the entry pass into him.  Once that happens, both Blake and Brown cut off of Gasol. 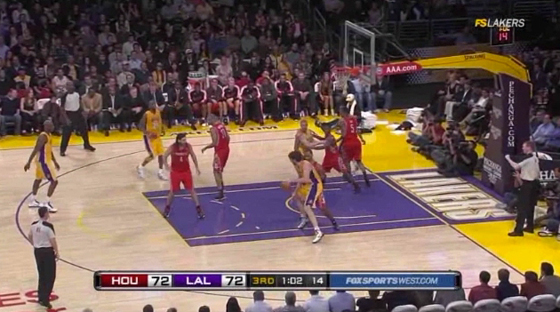 The purpose of the two cuts off of Gasol is to clear the area for him to operate.  You now have four Lakers' on the weakside with Gasol on the block, and because of that, there is no logical way to send a double team. 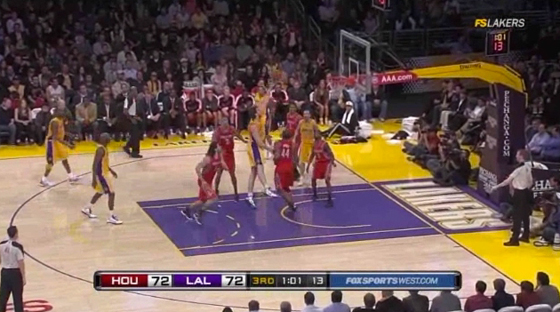 Because no double team can come, Gasol now can back down his man and work on him one on one on the block. Gasol makes a move and is able to finish in the paint.  Here is the play in real time:

When you watch the clip live, you can see how the double-cut off of Gasol just makes things so much easier for him. He makes the catch, looks around for the double, and if it doesn't come, he goes to work.

Here is another look at this set, coming out of a transition opportunity.  The ball gets pushed up, but nothing is there when Odom kicks it out to Steve Blake in the corner.  Instead of forcing the issue, Blake waits for the triangle to set up with Bynum on the block, and enters it into the post.  You then have the double cut, allowing Bynum to work one-on-one.

This play is a quick hitting option off of the double cut.  The ball gets to Ron Artest on the block after he comes over to create the triangle.  Once he makes the catch, you have the double cut, however instead of simply cutting through, Kobe sets a screen for Gasol on the opposite block.  Gasol comes off of the screen and gets the basketball flashing to the rim.

Off of this basic post up sets, you can do a number of different things.  We already showed you one (the screen for a big on the opposite block), but here is another one that is commonly used: 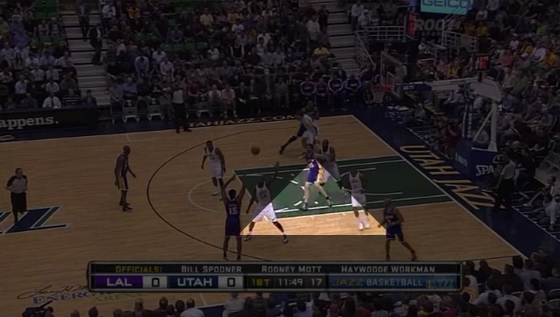 To get the triangle on this set, you have Gasol posting up on the strong side.  Once Gasol gets to the block, the ball gets entered to him from the wing. 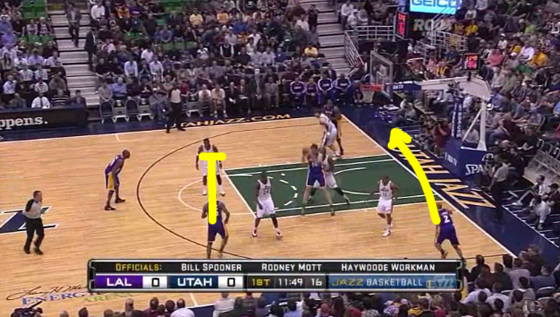 Derek Fisher, the man in the corner does the same exact thing he does in the basic post, which is flash to the opposite corner.  What changes is what the wing man does.  Instead of cutting through, he is setting a screen for the Laker on the perimeter, in this case Bryant. 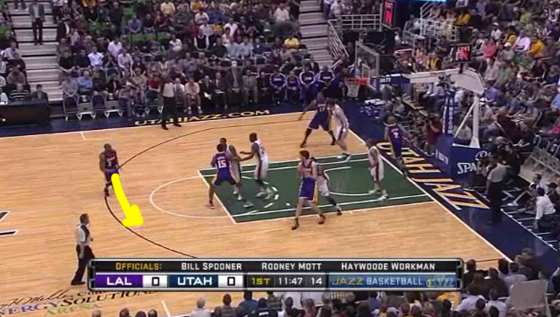 Pau has the ball with his back to the basket, but he isn't looking to make a move here.  He is patiently waiting for Bryant to cut off of the Artest screen. 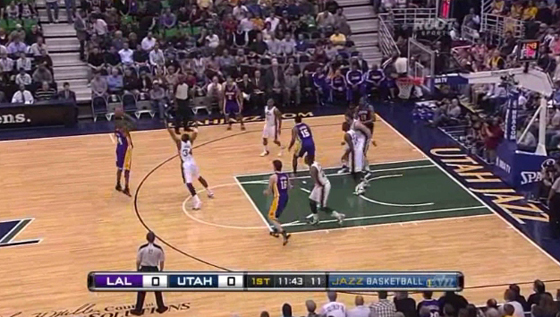 Kobe cuts off of the screen, Pau makes the pass, and Kobe gets the basketball on the outside.  After a pump fake and a dribble, Kobe gets off an open jumper.  Here is the play in real time:

Watching the play live, you can see that all eyes are focused on Gasol when he makes the catch (including Bryant's man), this sets up the screen for the inside/outside play perfectly.

Here is another look at the set.  Instead of working the ball inside after a few passes, Fisher enters the ball before he crosses halfcourt.  He still sets a screen for Bryant, but because of the quick entry pass, it is a handoff to Bryant instead of a pass out of the block.  The result is still the same as Bryant knocks down the open three.

The final post up set we are going to look at is sort of a delayed post up with the big coming from the weakside of the court to get the ball on the block: 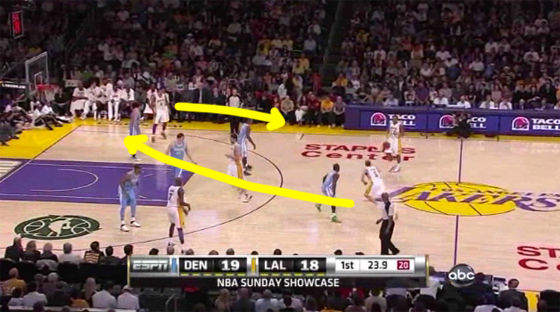 The play starts with the point guard (Blake in this case) bringing the ball up and getting it to the guard who is even with him.  Once the two-guard (in this case Brown) makes the catch, Matt Barnes flashes from the corner to the wing.  The reason for the flash is not only to get the basketball, but to clear the corner for Blake who is cutting into the area. 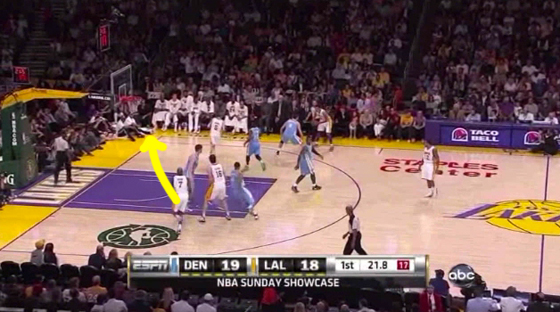 Once Blake gets to his spot in the strong side corner, Lamar Odom comes over from the opposite side of the court, setting up on the block. 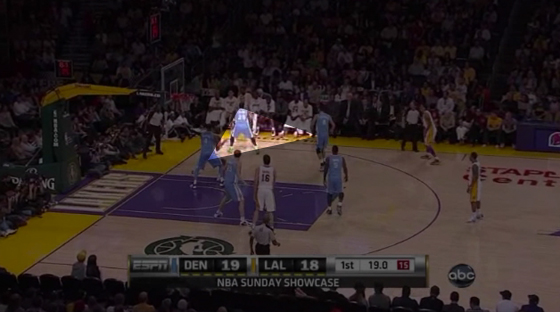 Unlike most sets that start with a triangle at the start, this set gets the triangle late in the set, and once the ball goes to Blake in the corner, he enters it to Odom.  With proper spacing Odom is given plenty of room to work on the block.  Here is the play in real time:

The thing to notice here is the spacing.  That is the key to the triangle, proper spacing.  Barnes and Blake aren't too close to each other and once the ball gets to Odom in the block, the spacing is what help prevents a double team.

Here is another look at the play, and on it, Gasol (the man posting up) actually gets pushed way off of the block and closer to the elbow.  So instead of entering the ball from the corner, Artest simply enters it from the wing, and the him and Fisher cut off of Gasol to maintain proper spacing.  This gives Gasol room to operate, and he responds by knocking down the easy jumper.

The last set we are going to look at is a set that uses the threat of a big posting up to set up action on the weakside. 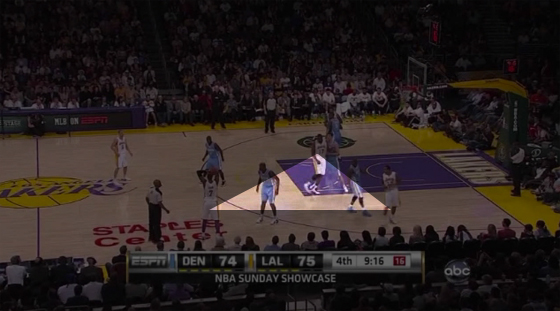 The play starts with the Lakers setting up their triangle on the strong side.  However, the Lakers aren't entering the basketball into the post.  Instead, it gets swung to the weakside guard. 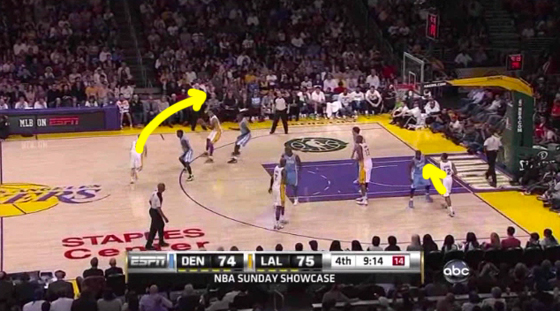 Blake enters the ball to the second weakside Laker and cuts off of him for a dribble handoff (an option that is actually used a lot in the offense, and this is something the Timberwolves actually use a ton).  As this happens, Brown walks his man down to the block. 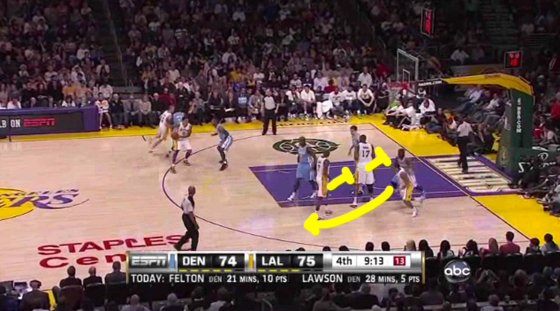 Barnes fakes the handoff, and when he does, Brown comes off of a staggered pindown screen designed to get him open on the wing. 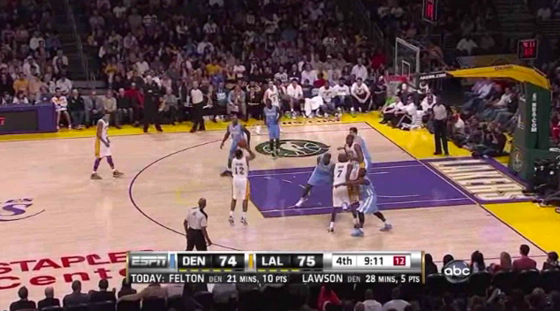 The staggered pindown works and Brown comes off of the screen wide open.  Barnes makes the pass, Brown catches the ball, and knocks down the easy jumper.  Here is the play in real time:

A set like this really shows the beauty of the Triangle.  The Lakers show two different things (a postup and then a handoff), but those are both decoys, as the real play is the staggered pindown.  How many offenses in the NBA do you see have three options like this?

Here is another look at the set, and this time Bryant is the one who is setting up to cut from the weakside.  This is what makes the Triangle tough on the defense.  You want to watch and defend against Kobe off of the basketball, but you have other things (such as the fake handoff in this case) that you need to worry about.  That clears the middle for Bryant who gets the ball on the move and finishes at the rim.

A lot of people tend to think that the Triangle is a "superstar" offense and point to the lack of success Minnesota has with it as proof.  I don't agree with this, and I actually think that the Triangle can work outside of L.A.and Chicago, but you need the right personnel.  Part of that personnel?  A big who can work one-on-one on the block, allowing the offense to utilize these options.