The Celtics and Bulls defend the pick-and-roll exactly the same, to wonderful results. They can both thank Tom Thibodeau.

Two of the best teams when it comes to defending the pick-and-roll are the Boston Celtics and Chicago Bulls. According to Synergy Sports Technology, both teams are in the top five in terms of Points Per Possession (PPP) allowed in both pick-and-roll situations (Synergy labels picks-and-rolls as either ball handler or roll man).  When the ballhandler finishes the possession with a shot, foul or turnover, the Celtics allow a PPP of 0.767, good for fourth in the NBA. When the roll man finishes the play, the Celtics allowed a PPP of 0.909, which is good for second in the NBA.  Meanwhile, the Bulls are second when it comes to defending the ballhandler, allowing a PPP of 0.750, and fourth in the NBA on plays to the roll man, allowing a PPP of 0.911.

The similarity in the numbers is interesting considering that both the Bulls and the Celtics utilize the same strategy when defending the pick and roll.  This shouldn't surprise anyone since the man who implemented this defense in Boston, coach Tom Thibodeau, is now the head coach of Chicago.  So how do both of these teams defend the pick-and-roll?   They like to "swarm" the pick and roll action, meaning that they like to double the ballhandler and rotate another defender to the roll man.  Essentially, these teams are using three defenders to cover two, relying on their rotation and trust to prevent the offense from getting open looks outside of the pick and roll. 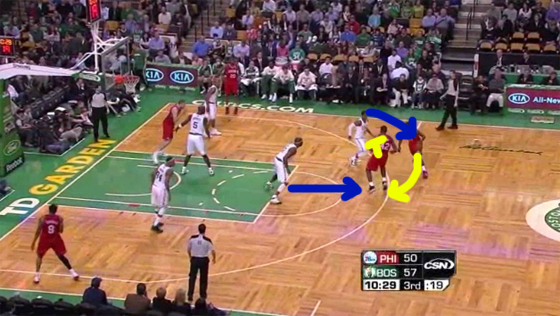 Here, Elton Brand sets a screen for Jrue Holiday, and Holiday uses it taking the ball to the middle of the court.  As he comes off of his screen, Holiday is met by Jermaine O'Neal who steps up as Rajon Rondo goes over the screen. 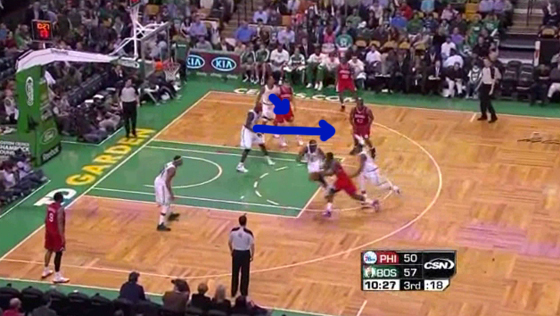 You now have two defenders on Holiday, meaning that Brand (the screener) needs to be picked up.  Kevin Garnett steps up towards Brand, making sure he doesn't get the pass.  Garnett stepping up means that his man, Spencer Hawes, is now open.  Ray Allen steps up and takes that pass away.  The Celtics are now giving up the corner pass, but they know that this a difficult pass to make, and if it does get completed, it is such a long pass that the defense can rotate back to it. 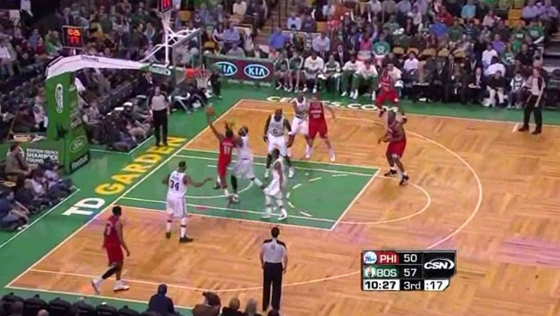 In this particular situation, Holiday goes for the lay-up, but because O'Neal stepped up to defend him he is able to contest the attempt and force the miss.  Here is the play in real time:

As you rewatch the play, you notice that every single Celtic defender is on a string.  They all go through their rotations without hesitating or even looking back to see if the rotations are made.  This is the beauty of the Celtics' defense.  They all trust each other so much, and that trust is what allows them to rotation sharply and make it so hard for the offense.

On this pick-and-roll, the Timberwolves try to execute a quick roll, where Michael Beasley doesn't really set a good screen, but quickly rolls to the rim.  Even on a pick-and-roll like this, the Celtics' rotations shine.  It looks like Beasley is going to get a wide open lay-up, but Glen Davis rotates over, steps up, and takes the charge.

This is another example of the Celtics' communication on the defensive end.  Here, Danny Granger comes off of a screen set by Jeff Foster, and the defense commits two defenders to Granger.  Initially, Rondo is the defender who steps up and rotates over to Foster, but as Foster continues to the rim and Rondo's man slides to the top of the key, Rondo needs to leave Foster.  Almost instantly, Ray Allen slides in and picks up Foster.  Rondo doesn't even look at Allen; he knows that Allen knows that he needs to pick Foster up and there is zero hesitation.

After some growing pains early in the season where the Bulls struggled a little bit with Thibodeau's system, they seemed to have "gotten it" as we approach the postseason.  Watching the Bulls defending the pick-and-roll, it looks like the Celtics just came over and put on their uniforms. 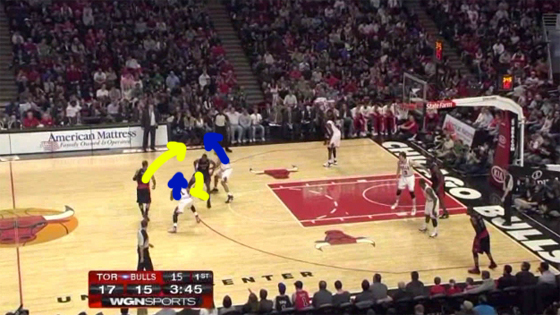 Here, you have Jerryd Bayless coming off of a screen set, taking the basketball to the middle of the court.  Taj Gibson steps up and meets Bayless as Derrick Rose goes over the screen. 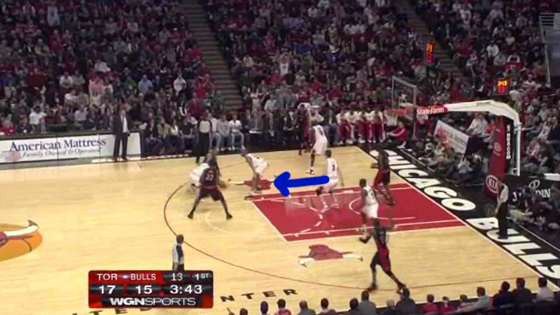 Just like with the Celtics, you have two defenders committed to defending the basketball.  This leaves the screener open, and Omer Asik steps up to pick him up. 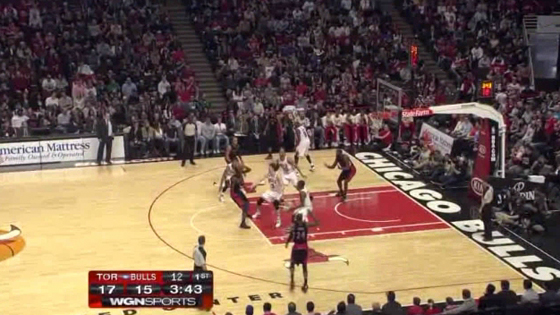 As the pass gets made, Asik is right there in the screener's face, defending him.  Eventually, the ball is forced to be kicked out to start the offense again (where the Raptors try another pick-and-roll that fails).

Just like with the Celtics, there are sharp rotations here on this pick and roll.  As Asik steps up to defend the roll man, his man flashes from one block to the other, trying to create confusion and mess with the Bulls' rotations.  Instead, Gibson simply drops down and picks him up after the pass from Bayless gets made.

On this play, the Pistons run a pick-and-roll and the Bulls dedicate their three defenders to it with Rose and Kurt Thomas playing the ball handler and Carlos Boozer stepping up to the roll man.  Boozer leaves his man, meaning Luol Deng needs to leave his man in the corner to pick him up.  That happens as the basketball gets deflected out of bounds.

Watching both the Celtics and the Bulls run the same defense is a credit to Bulls' coach Tom Thibodeau and his ability to teach a defense.  Despite the fact that he has left Boston, they know his system and it works so well that they have continued to use it even though Thibodeau isn't there anymore.  Maybe more impressive is the fact that the he has the Bulls playing the same exact defense, making few errors, in under one season.  It will be interesting to see if the Bulls and the Celtics meet in the playoffs whether or not both teams will even try to run the pick-and-roll on offense.