Before we doom the Oklahoma City Thunder, don't forget just how much this young team -- lead by Kevin Durant and Russell Westbrook -- has already accomplished in such a short period of time.

"I've been getting a lot of heat lately." Those were Russell Westbrook's words after the Oklahoma City Thunder polished off an ugly, but entertaining triple-overtime victory to defeat the Memphis Grizzlies in Game 4 of their 2011 NBA Playoffs series. Stripped of their context, they give off a whiff of immaturity, a sign that maybe Westbrook is having trouble handling the responsibility of being a marked man. Add in the context -- them coming after a game where he managed to take 13 more shots than Kevin Durant, the two-time youngest-ever league-leading scorer in NBA history -- and it almost seems worse. For that crime, many will argue Westbrook probably deserves the heat.

Take the logical next step in this conversation, and you have what has infested the NBA over the past three weeks. All around the league, people are starting to wonder if they've been duped. Could it be that Oklahoma City has some issues? Is their precious chemistry starting to fray on the edges? Is it possible that Westbrook and Durant are fatally flawed as a duo? Finally, if so, who is to blame? Is it Westbrook, who doesn't ever pass the ball (what most people think), or is it Durant, who can't ever get open (a vocal minority, of which I'm sad to say I might be in myself a lot of the time)?

It all makes the regular season and, frankly, the last two years seem like a distant memory. This year, the Thunder finished 13-4 against a difficult schedule when starting their current lineup of Westbrook, Durant, Serge Ibaka, Thabo Sefolosha and Kendrick Perkins. They entered the playoffs as the most obvious championship-ready antidote to the Los Angeles Lakers in the Western Conference. Not only were they good enough to win it all, but there was seemingly nothing to nitpick. Their stars play hard and were good citizens. They play a fast-paced style that is easy on the eyes. They have rabid fans. They have great role players. They're in a small market. They are athletic and capable of making spectacular highlight plays. The next bad move general manager Sam Presti makes will be his first. Many of these factors are aesthetics, but they all got rolled into the way we viewed the on-court product.

Then, the playoffs started, and adversity struck. The Thunder are 6-3 in the playoffs, but it hasn't always looked pretty. They needed triple overtime just to give themselves a chance to beat the No. 8 seed in a seven-game series. Westbrook has become a threat to Durant ... or is it Durant has become a threat to Westbrook? Now, Westbrook's style, Durant's lack of strength and coach Scott Brooks' simplistic offensive sets are being put under the highest level of the NBA's microscope. It's not just Westbrook that has been getting a lot of heat lately, though many of these questions get recast in his direction. It's the entire Thunder way.

For some reason, this really makes me mad. I get that this is what every NBA team making a playoff run must face. Similar questions are being asked in Chicago and Boston. Significantly more overbearing questions always will be asked in Miami. And those are the teams still playing. For teams like the Lakers and Spurs, the questions are much louder. But the second-guessing of Oklahoma City strikes a nerve, and there's one major reason why. 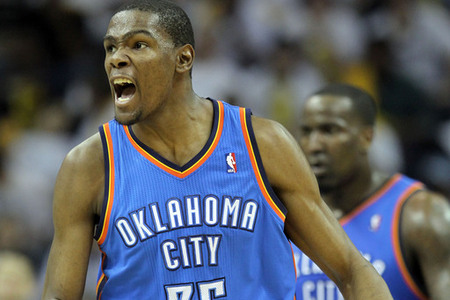 Three years ago, Kevin Durant was a rookie struggling with a deck was stacked against him. This league isn't made for 19 year-olds, even ones with Durant's pedigree. The mental capacity of a 19-year-old doesn't allow them to flourish in any walk of life, particularly one as brutal as professional basketball. It's why the NBA is trying to raise the age limit more, even though it comes across as denying someone the ability to perform their craft and attend to their needy families.

Durant, of course, was no ordinary 19-year-old. He took over college basketball as a freshman the year before in ways unwitnessed since Carmelo Anthony did it several years prior. But while Anthony had the look of a physical speciment, Durant did it with a freakish body that was sure to grow stronger as he grew older. Anthony looked like a man among boys; Durant looked like a boy among boys. That amount of potential, combined with his humility, made Durant an NBA team's dream, one that didn't go first in the NBA Draft only because the ideal of the great big man was still in play.

Knowing this, the then-Seattle Supersonics decided to make life tougher on the young kid already making a phenomenally difficult transition. They gave away their top two players, guys who could have lessened Durant's scoring load. They hired a head coach who insisted on turning Durant into a one-dimensional 6'10'' shooting guard, not even bothering to station him near the basket. They threw in the looming relocation drama, one that prevented Durant from bonding with his fanbase.

With all that happening, yes, Durant was a bit underwhelming. He scored OK, but was tremendously inefficient and didn't do much else. There was a vocal minority that suggested he didn't deserve the Rookie of the Year, and an even more vocal sub-minority that wondered if he could ever be a complete player. Three years later, Durant is a much-improved passer, defender, driver and rebounder, all while adding more tricks to his incredibly diverse array of offensive moves.

If he did that much in three years, who's to say he can't he get stronger and grasp the fundamentals of playing off the ball? 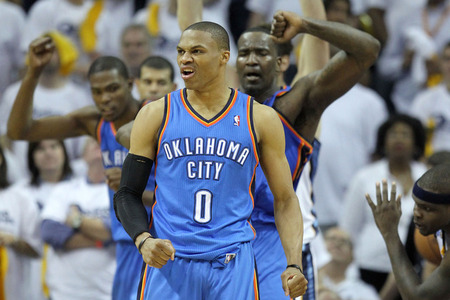 Three years ago, Russell Westbrook was a college shooting guard and the third-best player on his team. While Kevin Love provided the scoring and Darren Collison provided the stability, Westbrook was asked to provide the jolt. That jolt came in the form of fast breaks, rebounding and mad dashes to the rim. UCLA would have been good without Westbrook, but with Westbrook, they became great before eventually falling in the Final Four.

That's at least the surface analysis of what happened to Westbrook in 2008. Peel back a few layers, and you start to realize just how adaptive the supposed selfish gunner really is. When Westbrook was 17, he was a 5'10'' point guard, placed in that position because he had to be. He was heading towards a different career, one where he maybe played high school and college, but never further. Then, Westbrook hit a growth spurt, sprouting five inches before his senior season. His coach, unsure of what to do with a 6'3'' point guard, moved him to shooting guard, and he thrived enough to get a UCLA scholarship.

Fast forward to his sophomore year. The Bruins got caught in a bind when Collison went down with an injury, and coach Ben Howland's only answer was to turn to Westbrook, who barely played as a freshman. So Westbrook went back to being a point guard and succeeded, leading his talented team to a 7-0 record. When Collison returned, Howland shifted him back to shooting guard, and he figured out ways to fit in. He even willingly accepted a bench role so Howland could work an injured player back into the mix. Ultimately, he led the team in assists despite playing most of the season off the ball.

To review: in the span of four years, Westbrook shifted positions four times and accepted a bench role, and still rose to the No. 4 pick in the draft. The Thunder adopted the Durant approach with him, handing him the keys and letting him grow. As a rookie, Westbrook was among the league leaders in turnovers, but they stayed patient with him. Now, Westbrook is putting up similar numbers to the league's MVP on a similarly-good team, all while continuing to provide all the energy plays they need. He outperformed said MVP in the World Championships in Turkey and earned his first all-star berth this season.

If he did that much in three years, who's to say he can't ultimately use these experiences to improve his decision-making? 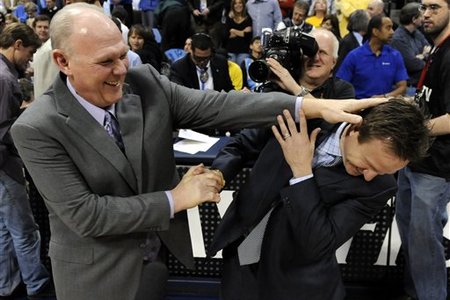 Three years ago, Scott Brooks was in his first year as a Thunder assistant and just four years removed from his first coaching job of any kind. That may seem like a lot of years, but it's not even close, especially when you consider that two new coaches doing battle in the Eastern Conference Semifinals (Tom Thibodeau and Larry Drew) had spent decades as assistants before getting their first head gig.

The 45-year-old Brooks looks much younger than 45, with a boyish face and few wrinkles. When he took the job from P.J. Carlisemo in 2008, it was at a seminal moment of the rebuilding process. The Thunder weren't expected to be good, but they were expected to at least be more competitive than 1-12. It was on Brooks to reach his young team despite having little experience to gain their respect. He wasn't somebody who had a track record developing young talent. He was a young coach himself expected to find a way to identify with his young team.

And identify he did. Brooks scrapped pretty much everything Carlisemo did, installing a way of planning that was more effective than most longtime coaches ever knew. He vastly oversimplified the playbook on both ends of the floor and committed to clear stepping-stone goals. When I talked to him out in D.C., he admitted to me that he didn't even make it a priority with his team to necessarily win games. The first step, he told them, was to consistently be competitive, and only then would he emphasize the need to close.

In other words, in the short term, Brooks sacrificed any subconscious coaching desire to be a genius with a philosophy that made it so much easier on his players. Maybe the Thunder would have grown into a juggernaut with anyone behind the bench, but there's no way it happens this quickly without Brooks. All this for a man who had never been an NBA head coach before and is still learning the ropes himself.

If he spurred that rapid an improvement in three years, who's to say he can't eventually take the Thunder to the top? 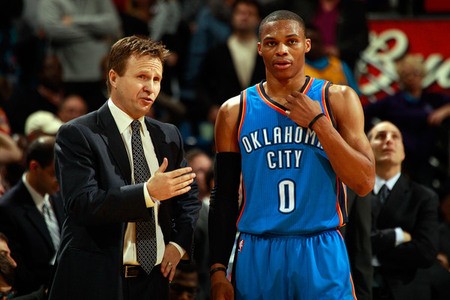 I think you catch my drift by this point. Second-guess Oklahoma City if you want, because that's what we do. But don't issue a referendum on their future because they don't win the 2011 NBA title. Teams this young play college basketball. Teams that are a little older than this are hoping for relief in the form of ping-pong balls. Teams this age shouldn't be anywhere close to being six wins away from the NBA Finals.

"They're two games away from going to the conference finals. Two years ago, they won 24 games. They're young players. They're 23 years-old," Wizards coach Flip Saunders said when I asked him about the Thunder on Tuesday. "You can't expect those guys to play like they're 29 years-old."

Actually, Saunders was off by a year. Westbrook and Durant are 22. Serge Ibaka and James Harden, the two players who played the third- and fourth-most minutes this season, are 21. The average age of their top four players is younger than the average age of Big East regular-season champion Pittsburgh. Let that sink in for a second. The average age for the top four players on arguably the best championship contender in the Western Conference is barely old enough to order an adult beverage.

"For their age, and what they're doing to be able to fight back how they did [in Game 4], that's a great stepping stone for them," Saunders said.

"Stepping stone" is the key phrase, because that's what the 2011 NBA Playoffs are for them. Don't feel bad about giving Westbrook and Durant a break. They are just kids, after all.