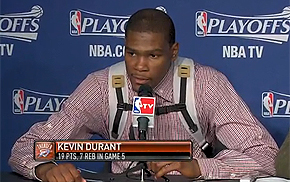 Kevin Durant of the Oklahoma City Thunder wears a backpack after games. What's that all about? What's he carrying around all of the time? Is Nate Robinson in there? All of Durant's modesty? (Like it would fit.) His two scoring championships? A Tupperware filled with swagger? (Like it would fit.) All of those jerseys he wore in that iconic (iconic?) rookie commercial? A lot of sports drink? Scott Brooks' hair products?

Oh yeah, that. Some mundane personal affects. A reporter asked Durant after the Thunder's stomping of the Memphis Grizzlies on Wednesday what was in the backpack.

For what it's worth, KD played it up a bit in a pre-taped Inside the NBA segment that unfortunately aired after the big reveal.