The Chicago Bulls dominated on the glass, coming up with 19 offensive rebounds in their Game 1 domination of the Miami Heat. How can they attack the boards and have an elite defense? It's all because of Joakim Noah.

The Chicago Bulls pasted the Miami Heat onto a brick wall Sunday evening, coming away with a 103-82 victory in Game 1 of the Eastern Conference Finals. The Bulls did this despite shooting just 43 percent from the floor; the Heat shot 47 percent, and lost by 21. So Chicago was doing something right.

And that something was killing the offensive glass. Chicago ended up with a whopping 19 offensive rebounds in just 46 opportunities, a huge 41 percent offensive rebounding percentage. That created a grip of second-chance opportunities, of which the Bulls did a better job converting than they did their first attempts. Joakim Noah had a full eight of those o-boards; Carlos Boozer offered four, and Taj Gibson came up with three off of the bench.

Which begs the question: if you can be so good in one area of the game, but so bad in the aggregate, is that area of the game important after all? It's no secret that many elite coaches (or coaches of elite teams, more accurately) have largely abandoned the offensive rebound in favor of a stronger focus on transition defense. Zach Lowe of SI.com discussed the gradual decline of offensive rebounding earlier this season.

The larger story is that the league as a whole seems to be moving away from viewing the offensive rebound as an important weapon. For the second straight year, the league has a pretty good chance to post the lowest overall average offensive rebounding rate in its history, or at least back to 1974, the first year in which Basketball-Reference has reliable public data on the stat. Last season’s league-wide average of 26.3 percent was the lowest on record. The Timberwolves currently lead the league with an offensive rebounding rate of 30.8 percent, a mark which would have placed them 19th out of 23 teams in the 1983-84 season.

But is it that teams no longer view the offensive rebound as an important weapon, or is it more fairly assessed as a trade-off -- the chance for second-chance points vs. having four or five guys back -- coaches are no longer willing to make? That the Bulls -- the best defense in the league, and the No. 4 offensive rebounding team -- have it both ways presents a view into this question.

No team in the NBA outperforms on the offensive glass based on their defensive efficiency quite like the Bulls. 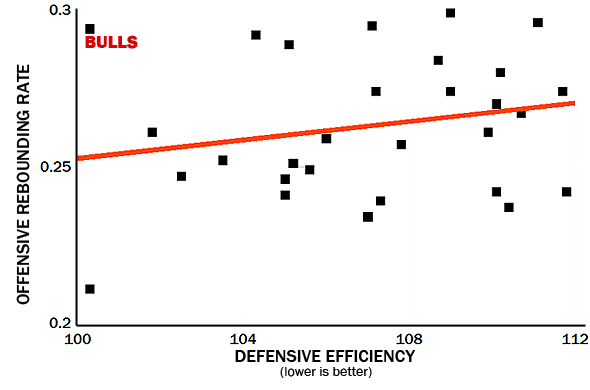 There are simply no elite defensive teams who double as elite offensive rebounding teams ... except for the Bulls. The Boston Celtics, that other elite defense? That'd be them, in the bottom left corner, the worst offensive rebounding team in the league by far. Boston's defense excelled with five men back almost every time. Chicago did it while still being a force on the offensive glass; you'll often see both big men pushing for position in the restricted area when a short shot goes up. When the Bulls take a long jumper, typically one big man will be in the restricted area, and the other will fill the lane below the free throw circle. (The Los Angeles Lakers and Memphis Grizzlies happen to be the only other teams that finish top-10 in both categories. The Lakers were No. 6 in defense and No. 5 in offensive rebounding; the Grizzlies were No. 9 in defense and No. 6 in offensive rebounding.)

How does Chicago manage this seemingly impossible balance? Joakim Noah be his name.

Noah happens to be one of the best offensive rebounders in the NBA, but he almost never fails to get back on defense. The combination of raw talent, unbridled energy, developed skill and pure athleticism (most frequently animated via footspeed to get down the court) provides Chicago excellence at both ends. Noah has an offensive rebound rate of 13 percent, but is only rarely out of position on defense; if you're looking for hustle in the box score, here it is.

It's a gambit against a team with transition flyers like LeBron James and Dwyane Wade; if Noah fails to get the board, the Heat offense could already be halfway down the court before Jo turns around. It didn't hurt Chicago in Game 1 -- after the first few minutes, Miami stopped pushing aggressively on the break, for the most part -- but it could going forward. At that point Tom Thibodeau would have to assess the trade-off that coaches typically shy away from: keep Noah, Boozer and Gibson on the offensive glass to bolster an otherwise shaky offense, or drop everyone back to prevent Holy Hell in the open court.

Most coaches don't have the luxury of Noah to make the former feasible.