Cleveland Rocks The Lottery, Kahhhhhhn Strikes Again, And It's All Rigged (Maybe)

The Cleveland Cavaliers used Nick Gilbert's good luck to walk away from the 2011 NBA Draft Lottery with two top-five picks, the first step to recovering from losing LeBron James last summer. In between, there were awkward interviews, conspiracy theories from David Kahn, and some poetic justice for the Clippers. Let's relive it all!

Share All sharing options for: Cleveland Rocks The Lottery, Kahhhhhhn Strikes Again, And It's All Rigged (Maybe)

The lottery itself is one of the better traditions in all of sports. As much as people focus on the NBA Draft itself, we all know empires begin at the lottery. Sometimes that means lucking into the no. 1 pick, and other times it means getting shafted. Imagine if the Boston Celtics won the Lottery in 2007, for instance. They might have taken Greg Oden no. 1 overall, they never would have traded for Kevin Garnett and Ray Allen, and NBA history's changed forever. There's no better place to play the "What If?" game than the NBA Lottery.

Likewise, maybe Minnesota lucked out last night. Kyrie Irving's got a chance to become the next Chris Paul, but Derrick Williams has just as good a chance at becoming the next Paul Pierce. If the Timberwolves have to settle for the second pick and a chance at Williams, it's not really a tragedy.

Plus, with a roomful of uptight old white guys, a handful of disinterested players, and forced interviews from someone like Heather Cox, you're just not going to do any better as far as unintentional comedy is concerned.

It's why no matter what happens, year in and year out, the NBA Lottery's about as ridiculous a show as you'll find in any sport. As for last night's rendition... It began with these fellas from Ernst and Young. Because nothing says "this totally isn't rigged!" like two guys straight off Wall Street. 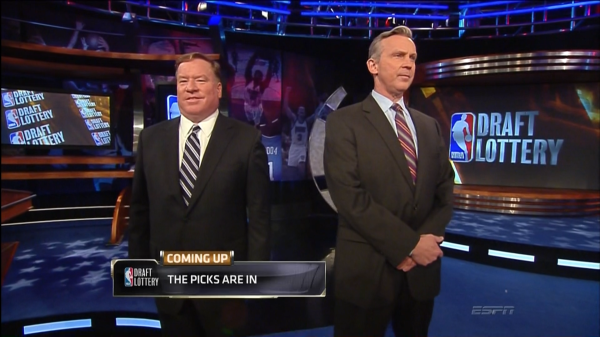 There was also this interview, which provided some phenomenal awkwardness for everyone involved. Remember when Gavin Maloof was trying to move to Anaheim and totally screw the city where Kevin Johnson's the mayor? Remember when Kevin Johnson went to New York City to personally block the Kings' move? Let's all pretend that never happened, right ESPN? 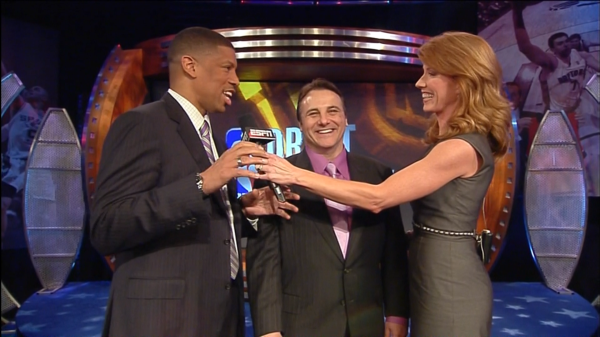 Thank God KJ saved it by explaining their situation saying, "We've had our tuggles." Who knows what that even means, but if the word "tuggles" doesn't make you smile, then I don't want to know you. Speaking of awkward interviews... Either Greg Monroe and John Wall were overwhelmed by all the old people in suits surrounding them, or they got suuuuuuuuuper stoned before the lottery broadcast.

And then there was Dan Gilbert's son. 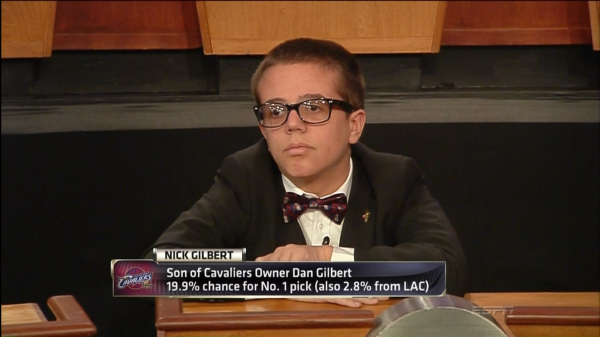 Of all the people sitting there last night, he was clearly working with the most swagger in the room. Not only did he rock the bowtie, but he worked the hipster glasses better than anyone this side of Russell Westbrook. Then he went and took things to another level when Heather Cox asked him about himself and he shrugged, "What's not to like?"

He's Dan Gilbert's oldest son and he was born with neurofibromatosis, a nerve disorder that causes tumors to grow throughout the body, and it's not like Cleveland needed anymore karma working in their favor Tuesday night, but Nick's presence pretty much sealed it.

You gotta give credit to Dan Gilbert, too. Talk about pulling out all the stops. I'm not saying the lottery was rigged, but as soon we saw that swaggerific interview with Nick Gilbert, you just knew the Cavs were winning it. There's NO WAY they could lose with him on their side. Right? Right. 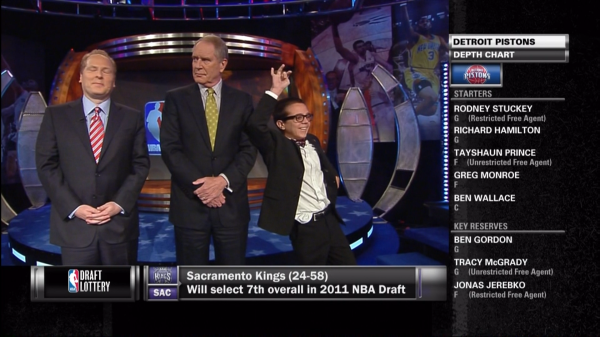 Which brings us to the man. The master! The legend, himself. KAHHHHHHHHHHHHHHN.

Sorry, but anytime David Kahn says anything I can't help but giggle. Like this: "My sense is, without having done the research, if you went back and looked at where the so-called 'mock drafts' were in the middle of May, and then compared them to where they end up, there's a lot of fluidity to it. And I expect they'll be some fluidity to it this year. But I haven't been studying it by any sense. You'd be surprised at how early it is. I mean, it's really early."

Then there was this, which will almost definitely get him fined a hundred grand: "This league has a habit, and I am just going to say habit, of producing some pretty incredible story lines. Last year it was Abe Pollin's widow and this year it was a 14-year-old boy and the only thing we have in common is we have both been bar mitzvahed. We were done. I told Kevin: 'We're toast.' This is not happening for us and I was right."

Can't really be mad at him for this one, because let's be honest, this league does have a habit of producing some pretty incredible storylines. That's part of the charm. So I won't get as upset as others have elsewhere, because he's only half serious. The same way a lot of fans were probably half serious when they saw Nick Gilbert last night and said, "Oh man, it's all over."

Having said that, how anyone could be so blissfully oblivious to the way the media works, say something like that publicly, and then expect it not to turn into its own story. I mean, it's the NBA Lottery for God's sake. There's already a zillion NBA conspiracy theories out there, and roughly half of them come back to the lottery. And then, "An NBA executive joked about the process being rigged"?

If I told you that yesterday, you'd have thought for a second and said, "Had to be Kahn."

Finally, speaking of failed institutions, my deepest condolences to the Clippers, who traded their first round pick to Cleveland--the same pick that wound up winning the lottery last night. But for all the karma working in Cleveland and Nick Gilbert's favor last night, it's only right that them winning the lottery simultaneous screwed the biggest scumbag in the NBA at the same time.

That's why I'm convinced the lottery's not rigged by David Stern, after all. Sometimes things just have a way of working out for teams and fans that deserve it. Look at what happened to Utah, whose franchise was decimated by Deron Williams a few months ago. Now they have the No. 3 pick and a chance to start fresh. Because they deserve it. As for all the people that don't deserve it? They get screwed. It's science.

Ask the Maloofs, who had a shot at landing the No. 1 but fell all the way to No. 7. David Stern may not have a hand in all this absurdity, but if he doesn't, then the Basketball Gods sure do.