The 2011 NBA Draft could see eight or more big men taken in the first 14 picks, more than in any of the past six years. Players like Enes Kanter and Jonas Valanciunas could make this The Year of the Big Men.

Welcome to the 2011 NBA Draft, to be known as "The Year of the Big Man." Meet Enes Kanter and Jonas Valanciunas, your guides for this journey through tall trees and Darko Milicic jokes. Enjoy your stay.

In 2009, the NBA Draft gave us "The Year of the Point Guard" -- no fewer than five prospects who played point guard in college or overseas were tabbed in the lottery, and 11 went in the first round. (Tyreke Evans, the No. 4 pick, played point guard at Memphis, but has for all intents and purposes become an NBA two-guard.) That draft included a run from Pick No. 17 (Jrue Holiday, 76ers) to No. 21 (Darren Collison, Hornets) in which every pick was a point guard.

As it turns out, most of the point guards taken in 2009 were pretty good. (The Minnesota Timberwolves ended up with the two the jury remains out on, Ricky Rubio and Jonny Flynn, taken No. 5 and No. 6.) The 2008 NBA Draft also saw four NBA point guards go in the lottery; the results beyond Derrick Rose (No. 1) and Russell Westbrook (No. 4) are not as great as in '09. So depth of position doesn't necessarily mean everyone who needs, say, a big man in 2011, will get a great one.

But they'll have a chance.

Eight of the 14 players projected for the lottery before the draft order was set are power forwards or centers; that's more than in any of the past six drafts. It has created the Year of the Big Man in the NBA Draft. 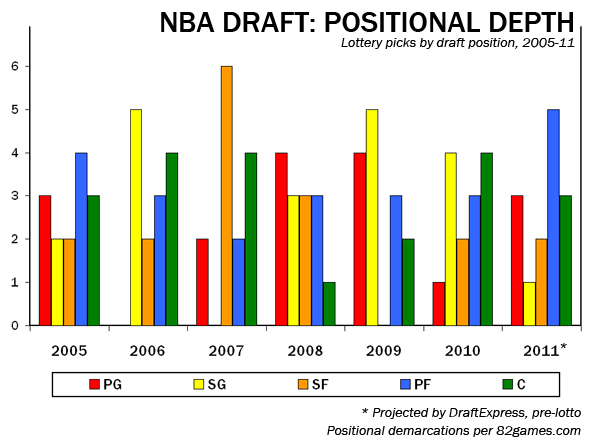 Last season saw seven power forwards or centers go in the first 14 picks; the 2005 and 2006 drafts each had seven, as well. But 2007-09 were dominated by guards and wings up top, with teams in need of big men stretching or being forced to pass up a need in the first go-around. It looks like the opposite will happen this year; teams that need guards early in the first round will be forced to reach for a lower prospect or ignore need and take a big man.

Kanter of Turkey and Valanciunas of Lithuania appear to be the highest-rated big men on the board; Kanter could go as high as No. 3 to the Utah Jazz and as low as No. 8 to the Detroit Pistons. Valanciunas has a similar range. There's also Lithuanian Donatas Motiejunas, Texas power forward Tristan Thompson, Kansas twins Marcus and Markieff Morris, Congolese forward Bismack Biyombo and Morehead State beast Kenneth Faried.

Will any or all of these pan out? That remains to be seen, and this year might be the most difficult in terms of scouting and player assessment for teams picking in the top 10. (Even the Cleveland Cavaliers, who landed the No. 1 pick and the right to pull Kyrie Irving, don't have it easy; their decision with the No. 4 pick is huge.) But teams will have every opportunity to find their next great big man, if only they make the right choice.