Dirk Nowitzki Is Unstoppable, And Thunder Vs. Mavericks Game 1 Further Proved It

Dirk Nowitzki's performance in the 2011 NBA Playoffs shows that none of the methods teams used to slow him down in the past really work anymore.

Share All sharing options for: Dirk Nowitzki Is Unstoppable, And Thunder Vs. Mavericks Game 1 Further Proved It

At this point, there's no NBA player that is as unstoppable offensively as Dirk Nowitzki. We're starting with the conclusion, and it's an apt way to begin after Nowitzki scored 48 points on 15 shots to lead the Dallas Mavericks to a 121-112 win over the Oklahoma City Thunder in Game 1 of the Western Conference Finals.

It's hard to think of a more impressive single-game playoff performance ever put together by someone not-named Michael Jordan. Since 1987, no player has ever scored over 45 points in a playoff game while taking less than 20 shots. Nowitzki's true shooting percentage, which incorporates three-pointers an free throws, was 93.9, the highest mark by a long shot in NBA Playoffs history. If Nowitzki just made all of his shots as three-pointers, he would have scored fewer points than he did.

All this against a team that can give him a lot of different looks with their primary defenders, whether it's length (Serge Ibaka), dogged fundamentals (Nick Collison), toughness (Kendrick Perkins, maybe), quickness (Thabo Sefolosha) or star-vs-star (Kevin Durant). This shot chart is something to behold. 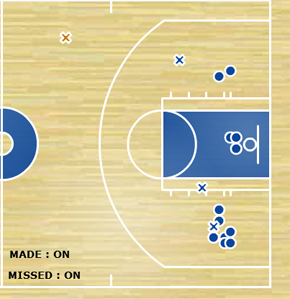 Nothing can take away Nowitzki's game. But unstoppable? That's a bigger jump. Thunder fans will claim (somewhat fairly) that their team had no chance last night, with referees calling fouls on defenders who breathed on Dirk. This robbed them of their ability to guard Nowitzki aggressively and forced a lot of odd matchups. Whether all those fouls were correct calls or not, we can assume that Dirk won't get as many whistles going forward. He's not going to score 48 points on 15 shots again. But even if you cut his free throw makes in half, Dirk would still have scored 36 points on 15 shots. Dallas can certainly live with that.

Hence, unstoppable. The bottom line is that all the defensive strategies a team used to be able to use on Nowitzki to slow him just don't work anymore. He and his team have mastered them all, leaving you pretty much powerless. Nowitzki was always great, but this year, he's taken his understanding of the game up a notch, with the help of his teammates and his coach. Below, a quick summary of some of those strategies and why they don't work anymore. 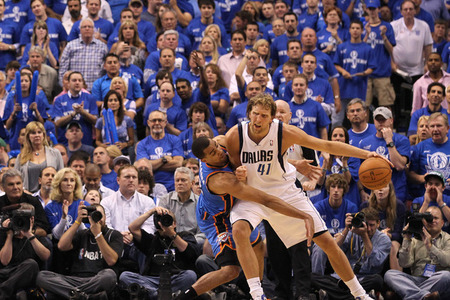 Pushing him out of his spot

Fronting and sending the pass to the baseline

Double-teaming from the top of the key

Guarding Nowitzki with a smaller defender

Double-teaming after he starts dribbling 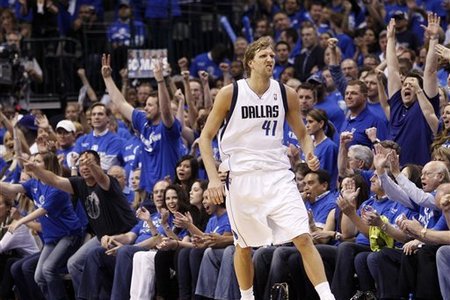 The bottom line is that there's no right way to play Nowitzki anymore. Whether it's personal growth or the improvement of the conditions around him, you can't have one strategy to slow him down. Your only hope is to mix it up and hope he gets confused.

Problem is, Dirk doesn't really get confused anymore, and he has a counter for every strategy. So really, all an opposing team can do is try their best and hope he misses shots. More and more, it's becoming clear that even that strategy isn't going to work.