Share All sharing options for: Have Chicago Bulls Lost Faith In Three-Point Shooting Against Miami Heat?

Three key factors led to the Chicago Bulls' 21-point win over the Miami Heat in Game 1 of the Eastern Conference Finals a week ago: a huge advantage on the glass, massive turnover problems for Miami and deft three-point shooting for the Bulls.

The Heat's turnover issues weren't expected to last; the Bulls don't focus on playing the passing lanes and Miami is fairly sure-handed. The boards were an incredible concern; Erik Spoelstra responded by using Udonis Haslem more frequently, which has stemmed the bleeding some, but Miami is still letting Chicago own the offensive glass. (The Bulls had 13 in Game 3.)

But perhaps Chicago's regression from beyond the arc has been the biggest factor in Miami's two straight wins and 2-1 series lead. The Bulls were extraordinary from long-range in Game 1, shot like it in Game 2 but went cold, and decided to give up the three-pointer in Game 3. Take a look. 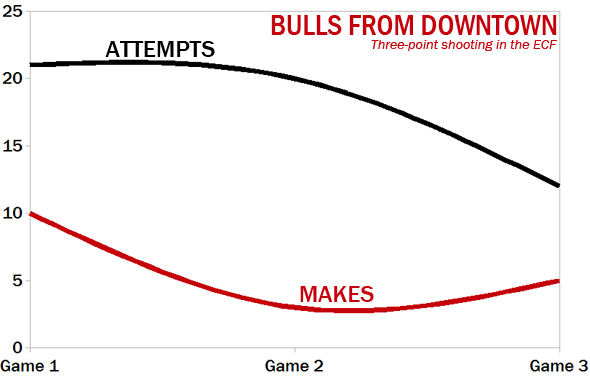 The Bulls went 10-21 in Game 1, mixing a high volume with a great efficiency level. Of course, the volume was in part dictated by the efficiency. Derrick Rose and Luol Deng were hitting their threes, so they kept shooting them. In Game 2, the strategy -- take threes to open up the interior for Rose and the Chicago big men -- continued. Unfortunately, the makes stopped, as Chicago shot just 3-20. (Kyle Korver was notably 1-7 in 16 minutes off the bench as Tom Thibodeau tied to find offense anywhere late. He's taken three three-pointers in the rest of the series.)

In Game 3, the Bulls stopped taking so many threes, despite shooting better; Chicago went 5-12 from long-range. By halftime, the Bulls had taken just five threes, hitting two. It's not all Chicago deciding whether these shots are taken -- Miami has done strong work challenging shooters, often making Deng or Rose put the ball on the floor or pass the ball around the perimeter as the challenger arrives.

It's worth noting that for the series, the Bulls are taking the exact same share of three-pointers as they did during the regular season, roughly one per every 4.6 two-pointers.

For more on the Bulls, visit Blog a Bull and SB Nation Chicago.