Mike Brown will likely be the next coach of the Los Angeles Lakers. Life shouldn't be too different from how it was under Phil Jackson ... unless Kobe Bryant leads a players' revolt.

Share All sharing options for: Mike Brown As Phil Jackson's Successor Could Get Lakers Back To The Top

Mike Brown will be named the new head coach of the Los Angeles Lakers, unless something happens to derail the seemingly inevitable at the last minute. Since the news broke Tuesday that Brown was in serious talks with the Lakers, there's been mixed reaction. Some have noted that Brown's impeccable defensive record and solid credentials make him a great fit. Others have resorted to snark overload.

Both reactions are fair. Brown is a good coach at the very least; it's not easy to build a world-class defense, and Brown regularly had the Cleveland Cavaliers near the top of the NBA in opponent efficiency. Cleveland finished in the top seven in defense three times in six years under Brown, despite few quality defenders beyond LeBron James, Anderson Varejao and Anthony Parker. That defense and LeBron's singular offensive greatness led the Cavs to gaudy records and an NBA Finals visit in 2007. Brown deserves a lot of credit here.

At the same time, he proved to be completely incapable of building an offense that wasn't completely predicated on high screen-rolls for LeBron and isolation plays. Though the Cavs did have a great offense in 2008-09 and 2009-10 -- Brown's final two seasons -- these were considered products of assigning John Kuester as an offensive coordinator. Kuester was hired by the Detroit Pistons in 2009, and Mike Malone took over those duties, and the offense was great during the '09-10 regular season. But most great head coaches don't need that sort of outsourcing, not in the NBA. Ones that do make up for it by giving off the vibe they are otherwise indispensable on the sidelines; Doc Rivers, who leaned on Tom Thibodeau and now Lawrence Frank, comes to mind.

But here's the thing: the Lakers need help for their defense way more than they need help for their offense. While L.A. finishes No. 6 in both offense and defense this season under Phil Jackson, the defense crumbled in the NBA Playoffs. Chris Paul diced through the Lakers' defenses in the first round; a combination of Dirk Nowitzki and the Dallas Mavericks' shooters was just deadly in L.A.'s four-game second-round exit. The Lakers lacked commitment, organization and the right tactics against Dallas. That comes down on the players for not figuring it out, yes; this is a veteran team who knows what it takes to win in the postseason. But from my vantage point, it looked like the Lakers weren't prepared to deal with the Mavericks' attack.

Under Brown, they'll be prepared; there's no question about that. Jackson is famously chill on the sidelines, in terms of directing traffic, especially on offense. He has instilled a system (the Triangle offense), he has taught the system, he trusts the system, he trusts the players to implement the system. He chills. Brown may not have that conviction of a system, but like Jackson he'll trust his players to make the right plays.

In fact, if we make a visit to my old friend, the Coaching Tri-force Classification System, Jackson and Brown aren't that different at all. 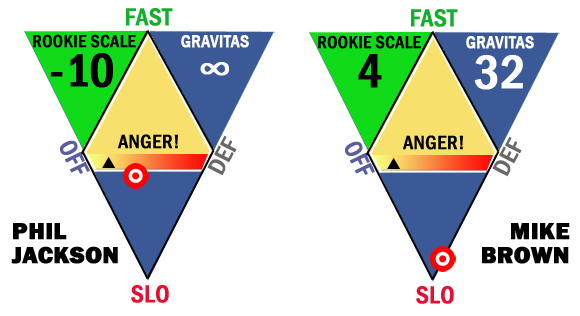 The target locates the coach's preference on the Gameplay Style Diamond, with the inputs being pace (north-south) and defense vs. offense (east-west). The Anger Index (outlined in white) measures a coach's propensity to scream and make rash substitutions. The Rookie Scale measures a coach's willingness to accede to beautiful youth; the Gravitas Spectrum measures a coach's gravitas (duh). There was once a rigorous statistical formula assigned to the Tri-force Classification System, but that's fallen out of favor among scholars in favor of seat-of-the-pants guesswork.

Considering that Kobe Bryant is the leading shot-taker for L.A., Brown's mix of chillaxness and lack of clout could be tricky; we could see the first 78-shot game in modern NBA history. But otherwise, Brown seems like exactly what the Lakers need: a defensive tactician who will let Kobe and Pau Gasol be who Kobe and Pau need to be.

The question is how the politics of bypassing Brian Shaw -- Kobe's chosen candidate -- and declining to ask Bryant's opinion on Brown affects the team dynamic. We've seen Obstinate Kobe, and it's not a good look for anybody. Especially a Lakers coach. As with everything in L.A., everything concerning the Lakers: drama can tear it all down.