Magic Johnson On Lakers Vs. Mavericks: 'Their Chances Are Slim'

Share All sharing options for: Magic Johnson On Lakers Vs. Mavericks: 'Their Chances Are Slim' 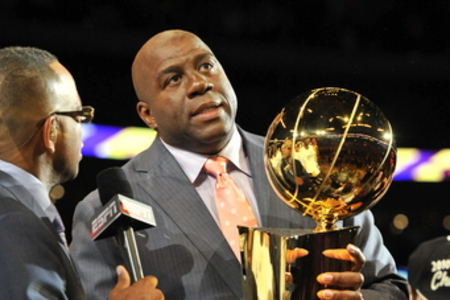 Kobe Bryant and the Los Angeles are in trouble against the Dallas Mavericks. Kobe might think, "Everybody's tripping," but... Include Magic Johnson in the "tripping" category, I guess.

As he tweeted Wednesday night:

I have never seen a team take it to the Lakers at home in back-to-back playoff games. I was surprised the Lakers didn't come out w/more intensity & better execution. Dallas is doing a tremendous job keeping them off balance. The Mavs have the Lakers pointing fingers at one another. It's going to be a tough climb to come back and I think their chances are slim.

The series isn't over, and if they win Game 3, they go back to being favorites to win the series. But there's just something off with these Lakers. That's why their chances look slim.

Keep in mind: Magic Johnson might be the biggest Lakers homer on earth. He may have sold his share of the team last year, but at the end of the day, he's the Lakers' version of Tommy Heinsohn. So, if even Magic thinks the Lakers are in trouble? It ain't looking good.

Not quite Magic Hour-bad, but the way things have been going, we may be headed that way.